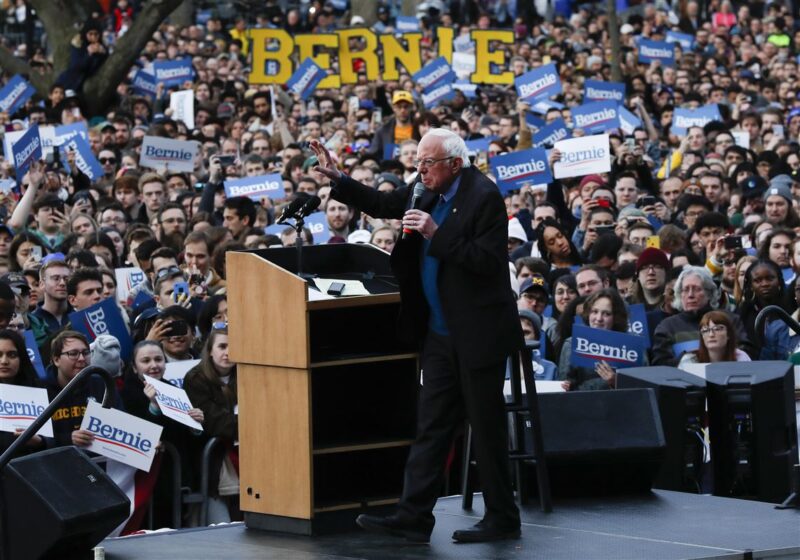 Celebrity culture has been transposed to the highest office in the United States. Exposure and appearance rank above character and integrity, and our perceptions of politicians are being warped with every weaponised speech and lie uttered by Donald Trump. But it is the Democratic presidential nominee campaigns where the factions of fervent supporters and performative support have demonstrated most acutely how celebrity culture has seeped into our – and in particular young people’s – understanding of politicians in the digital age.

The passage of celebrities to the political sphere is not a new concept. Ronald Reagan was a Hollywood actor before his venture into politics and Donald Trump was a reality TV star. Celebrities are not decorative. Every decision they make is political now. They are expected to have opinions, and politicians understand the immense power these celebrities have to engage and mobilise young people.

Emerging from the traditional, two-party system are a number of issue-based movements and organisations which seek to tackle the polarisation of American society along party lines, with many led by and targeted towards students. Brent Cohen, executive director of Generation Progress Action, tells The University Times that “party politics matters less for young people than it does for older people. Fewer young people identify as Democrats or Republicans than they do as independents, as compared to older generations”.

Instead, value-based voting has set the tone for political engagement among young people such that they “identify the issues they think matter most, the candidates who speak to those issues and will turn out to vote based on that”. In order for this model to operate, however, candidates must be equally willing to engage in a relationship with “young voters and potential voters early on, hearing from young people about the issues that impact our generations most, really being in listening-mode and then being thoughtful about how to respond with policy solutions that address the issues we are most concerned about”.

Speaking to The University Times, Matthew Nowling, national director of communications at the College Democrats of America, explains that “the American media and the voters take into account when we’re voting not only the candidate’s policies but the candidate as a person and what they personally stand for. I think that since that plays a big role people have the opportunity to really latch onto candidates”.

One of the two hopefuls to win the Democrat presidential nomination is Senator Bernie Sanders, who has snagged a number of famous supporters including Ariana Grande and Cardi B. According to Cohen, “there can be some value to really prominent, influential people coming out and making a clear statement that they value and recognise the importance of voting and that other people should do that as well”.

On the other hand, he says, “engaging celebrities is not a substitute for engaging with young people directly and an overreliance on celebrity endorsements or celebrity spokespeople would come back to haunt any campaign”.

In the wake of the 2016 election, there was extensive discussion about whether her cultivation of a wide range of celebrity supporters, including Bruce Springsteen and Lady Gaga, had harmed Hillary Clinton’s campaign. Whether celebrity endorsements are a tool in the construction of a campaign or a blunt instrument that divides the electorate remains to be seen. But it is the perception of politicians themselves, scrutinised under the unflinching eye of social media, that matters.

Some aspects of celebrity politics are harmless, if telling: Congresswoman Alexandria Ocasio-Cortez on Instagram live drinking wine and assembling IKEA furniture while talking to her constituents (and fans) about climate change, novelty prayer candles featuring a photograph of Speaker Nancy Pelosi beneath the words ‘Patron Saint of Shade’ in ornate calligraphy, Barack Obama featuring on Jimmy Kimmel’s Mean Tweets segment. During his campaign, Michael Bloomberg even employed an influencer-marketing company to create sponsored memes for social media channels. It’s clear that young people and students are in most politicians’ sights.

But it is in the dynamics of the Sanders campaigns, the strategic celebrity alliances and his faction of almost fervid supporters that celebrity culture is most striking – and subtle.

Neil Sroka, communications director of Democracy for America, tells The University Times that “young people’s support for Senator Sanders is in spite of Senator Sanders, not because of him and his celebrity”, and because the stakes are so high in the 2020 presidential race, “for a lot of people, they rightly view this as a generational opportunity to end the presidency that is an outright disaster for the country and the globe, but also, in the case of Senator Sanders, to actually begin addressing some of the core causes that led to the election of Donald Trump in the first case.”

But as celebrity culture becomes more fragmented, and cancel culture, endemic in the entertainment industry, has led a slew of celebrities to be dismissed as “problematic”, it is a candidate’s consistency which resonates with students. Sanders has been received with enthusiasm on this point, with his support of abortion rights before the decision of Supreme Court decision of Roe vs Wade and a campaign grounded today on many of the same economic principles he has fought for since the 1970s. But with a long political career behind him, Joe Biden’s transgressions – including his support for the wars in Iraq and Afghanistan and the Defence of Marriage Act – have weakened his support among students.

Lani Bohm, communications co-ordinator at Millennial Action Project, says to The University Times that aside from specific events targeting young voters on college campuses, there isn’t a “general tone or a general targeting of the younger generation to come out and vote” but that, despite this, young people are turning out in droves to exercise their vote.

We see that our futures are on the ballot in this election. Whether it be around student debt, to healthcare to job prospects, our future’s on the line

“Candidates”, she says, “should be really strategic when they’re trying to appeal to the younger generations”, especially as the American political landscape evolves to include increased involvement and representation of young people in decision-making roles. Despite the fact that “Vote Blue No Matter Who” rhetoric has not resonated with students, the gravity of the 2020 presidential election is not lost on them. According to Nowling: “We see that our futures are on the ballot in this election. Whether it be around student debt, to healthcare to job prospects, our future’s on the line.”

Sanders enjoys a significant lead among young voters. Sroka is “particularly hopeful” that the energy of students and young people will translate into high voter turnout. Although he admits that it may be “too early to be making calls about overall voter turnout”, “the challenge the Sanders campaign has to overcome is that cynicism and the doubt that young voters may have about their vote being able to have an impact in an environment where you have an almost unanimous opposition to Sanders amongst Democratic elite”.

But even as Sanders frames himself as a partner in a fight to be waged by the people, utilising the phrase, “Not Me, Us”, significant barriers remain which deter and restrict students from casting their ballots. According to a Generation Progress Action report, voter suppression measures are prevalent in the United States, affecting young people and people of colour, such as long voting lines formed at understaffed polling stations, polling stations closing down in minority neighbourhoods and some states requiring students to vote based on their family home address, even if it is thousands of miles away where they reside live. According to Cohen, however, “you’re going to see young people hurtling those barriers in droves to get to the ballot box. We know what is at stake here in terms of what another four years of the current administration would mean”.

Nowling explains that “college Democrats and college students around the country are enthusiastic to vote Donald Trump out and to elect a new Democratic Congress”. Importantly, students must be energised and incentivised to remain committed to the political process. Social media, Nowling says in this regard, plays a “unique role” to achieve this. For candidates to harness the energy of young voters, they must “listen to college students, show up, not only for rallies but have conversations with students about issues they care about [and] partner with progressive organisations that have a youth influence.”

According to Bohm, much of the intensity of young political supporters may be attributable to the political hyperpolarisation in the United States, but it is unclear whether or not this excitement is a force for good, or may have some drawbacks. Whether or not it will simply create a fandom culture where politicians are idolised is unclear. Nevertheless it is clear that campaigning has changed for good, and that the new style of campaigning is engaging students and young people in a new way.