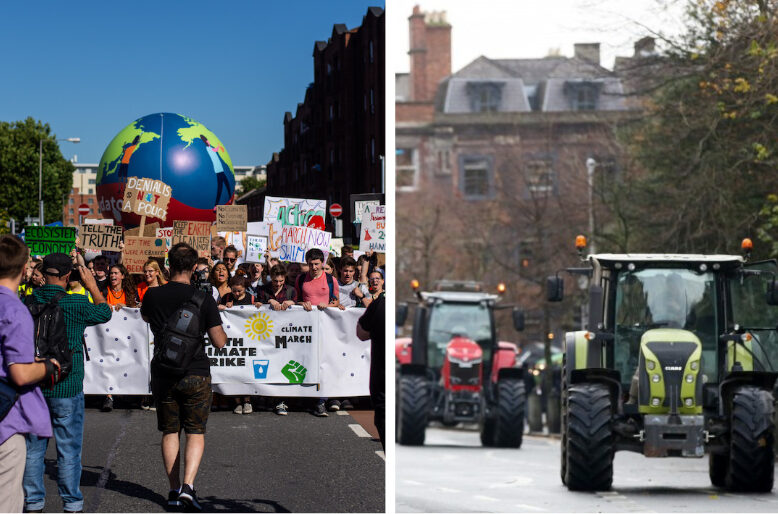 The year 2019 decided that politics now belongs in the streets, as a powerful wave of political protest cascaded across the globe. In Hong Kong the catalyst was unpopular new extradition legislation, while in France it was rising fuel prices. An unwanted WhatsApp tax kicked things off in Lebanon, and for Sudan it was the rising price of bread. Algeria, Catalonia, Bolivia, Iraq, Chile, Indonesia, Haiti: the torrent of uprising left few places untouched.

The triggers have varied, but the common thread is clear: a deep dissatisfaction with the prevailing political order. The voices raised in opposition to what is increasingly perceived as a broken system are becoming louder and fiercer, and here in Ireland the environmental movement enjoyed huge gains and a ramping up of momentum in 2019.

However, it was the on-the-ground struggle highlighted by the “farmers’ protests” that truly rattled the political cage, with demands for a better alternative to the current agricultural model.

The farmers’ protest actions fired up at a time when the agricultural question was becoming red-hot. Awareness of the climate crisis has been at an all-time high since last year, and the prevailing caricature portrays crazed tree-huggers irrationally baying for the blood of beef and dairy farmers. Of course, nothing’s ever so black and white.

We’ve got to get everybody on board, and that’s not going to happen if groups like farmers are being victimised

Obviously, there is no disputing the fact that the carbon footprint of the agricultural sector in its current form is enormous. Official figures from the Environmental Protection Agency state that the industry accounts for roughly 30 per cent of Ireland’s emissions, supposedly surpassing even transport as the single most polluting industry. Farmers have disputed the accuracy of these figures, however: agricultural emissions might only trump transport because emissions from aviation are left out of the calculations.

Similarly, farmers argue that the part their land plays in carbon sequestration is not taken into account. Nevertheless, the recent surge in popularity of plant-based diets can largely be attributed to mounting public concern about the ill-effects the global beef and dairy industries are visiting upon our planet.

But does that mean it’s environmentalists in one camp and farmers in the other? Not at all.

Tadhg Dempsey, a 21-year-old student and activist with Extinction Rebellion, an environmental organisation that advocates for mass civil disobedience in order to effect system change, tells me that “the environmental movement has got to encompass everyone. We’ve got to get everybody on board, and that’s not going to happen if groups like farmers are being victimised”.

Dempsey is a coordinator of what is known as the “inclusivity circle” within Extinction Rebellion, and his remit essentially mandates him to ensure the movement is as accessible and all-encompassing as possible. He explains: “We need a holistic view on the issues of this country if we want system change. We can’t unite people if we don’t acknowledge and stand for the struggles they face. That includes small-scale farmers. They’re not the bad guys here.”

people need to realise that farmers are facing a very difficult situation, and their very existence is on the line

Dempsey believes diagnosing the real problems associated with the industry involves analysing the increasing corporatisation of farming practices. He says the problem centres around large-scale farms with thousands of cattle on feedlots, exporting to factories in China, gaining multi-million euro trade deals – and wielding massive lobbying power over our government.

It’s also why, on a beautiful sunny day last July, I found myself being energetically jostled around by a heaving crowd of angry “small” farmers protesting outside the gates of the Dáil. I was timidly holding a placard stating “Extinction Rebellion supports small farmers”. Together with a small contingent of fellow climate activists, I hovered at the sidelines of the action to take in what was happening. Thousands of farmers had travelled from all over rural Ireland and descended onto Molesworth St, in a fierce and organised display of outrage.

Whole families chanting, giant thundering tractors, slogans scrawled on wellingtons symbolically flung in front of the government buildings: it was the first of what would become a relentless campaign of similarly awe-inspiring demonstrations that is only just now simmering down. Their radical direct actions continuously made national headlines, as they blockaded meat processing factories and retailers such as Aldi, halted traffic in the capital, and lambasted government policies and attitudes towards their livelihoods in the media.

Daniel Long, a 27-year-old Tipperary dairy farmer and spokesperson for Individual Farmers of Ireland, one of the many representative groups engaged in the protests, corroborates this version of events. “I think people need to realise that farmers are facing a very difficult situation, and their very existence is on the line”, he says. In January of this year, Long led a convoy of tractors to Dublin, blockading streets in the city centre for two days in a row, ultimately attracting roughly 700 tractors to the capital. He tells me planning this took huge effort from many farmers, all committed to improving conditions for people in the industry.

The tractor blockade was a radical move, but did the protestors feel like they had a choice? Not a fair one, according to Long. “The decision to take [that] protest to Dublin was not taken lightly … farmers are not getting a fair price for their product. They’re losing money every day of the week.” The price Irish farmers are getting for their beef is 23 per cent less than the EU average, and 50 per cent behind the UK. Long spoke too of the carbon tax being imposed on small farmers, which seems hugely unfair given that there is no such charge on aviation emissions. With evidence such as this, it is hard not to concur with Long that Irish farmers are really struggling.

I have seen first-hand my grandfather’s ecological expertise and the quiet, conscientious respect he holds for his land and animals

Personally speaking, I don’t eat meat, choosing instead a plant-based diet due to its lesser environmental impact (the Lancet Medical Journal has called for a 90 per cent reduction in meat consumption, while it is said our national herd must be reduced by roughly 40 per cent to avert climate catastrophe). However, my grandfather has been a small-scale dairy farmer in Mayo his whole life, and I have seen first-hand his ecological expertise and the quiet, conscientious respect he holds for his land and animals. If he is the archetypal small farmer, I know that they care for nature just as much as any environmentalist.

When I ask Long for his thoughts on the future of agriculture in Ireland as the climate crisis worsens, he speaks of a better way of doing things. He tells me that the current system of farming subsidies from the government, essential for making a living, does not make it easy to operate sustainably, and disproportionately benefits the large-scale farms. There are very few subsidies available incentivising more biodiverse forms of operating such as mixed cropping, agroforestry or organic farming, for example, which are grouped under the “regenerative agriculture” model being called for by environmentalists.

And neither are the interests of small farmers adequately represented by the powerful industry lobbying bodies, with the same Lancet report calling for the removal of these groups’ power to influence policymaking.

As George Monbiot – the environmental journalist, writer, and activist with Extinction Rebellion UK, put it when he humbly backtracked on his vehement pro-veganism position – “let them eat meat – but farm it properly”. As Monbiot contends, the challenge for environmentalists and small farmers alike is a just transition to a low-energy, diverse, small-scale farming system, with a lot less focus on maximising meat and dairy output for export. The only thing standing in the way? The system.

While current structures are widely believed to be immutable, recent mass movements have very obviously notched cracks in this order. United under a system that serves the few and not the many, supposedly divergent grassroots movements have a lot more in common than it might initially seem.