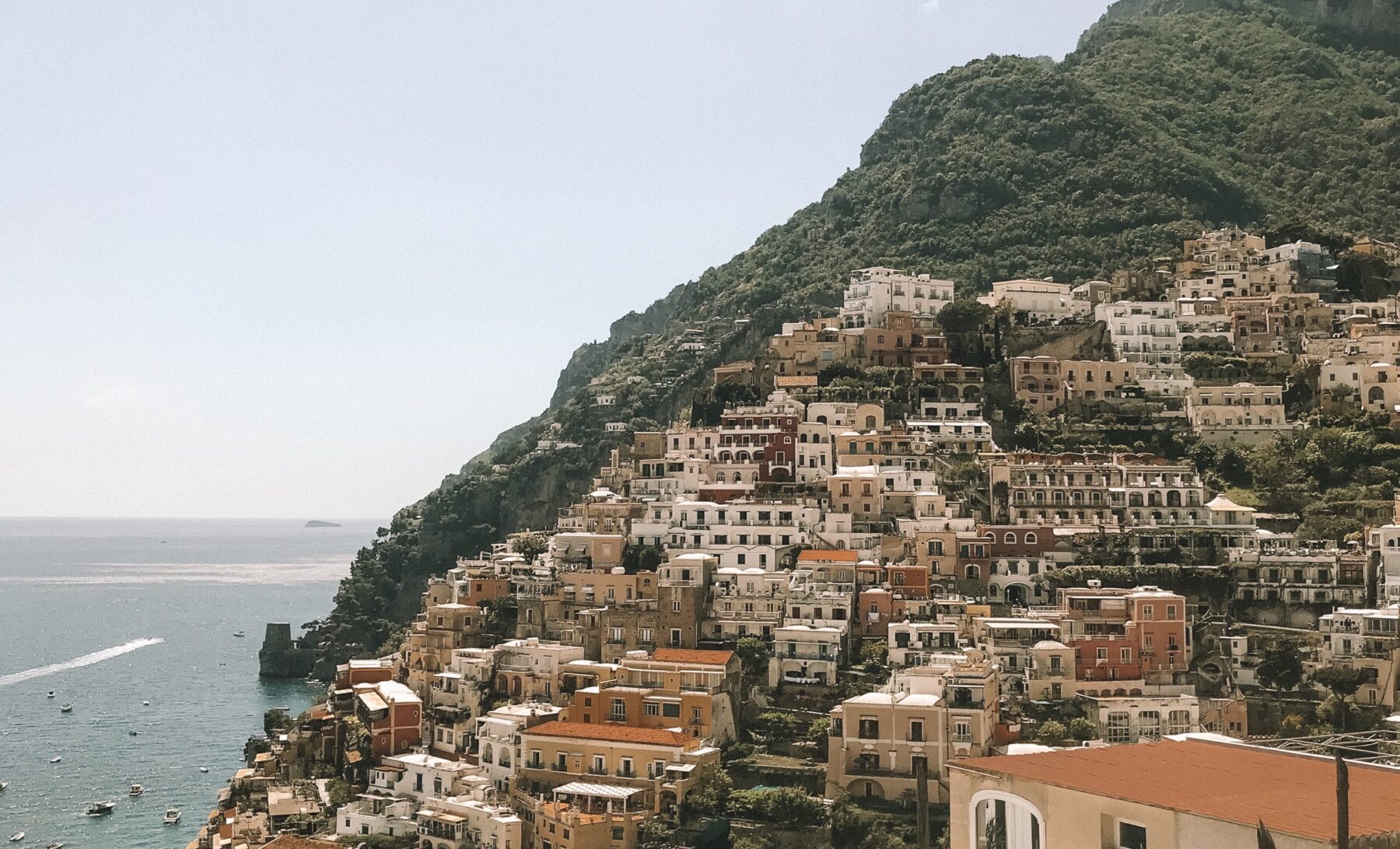 Moya Mawhinney visits Positano, one of the Amalfi Coast's famous cliffside villages – and finds a gorgeous town that's as expensive as you'd expect.

Ah yes, the idyllic Amalfi Coast. Driving along cliffside roads in a powder-blue vintage Fiat 500, the hot Italian sun beats down on your hand as you stretch out of the open window and feel the cool sea air blow through your fingertips. “Ciao bella!”, a handsome, sunkissed local shouts at you from his Vespa, precariously balancing a crate of fresh lemons on his lap.

You turn round the sharp bend and a breathtakingly beautiful pastel-coloured town comes into view, elegantly sprawling down the cliff, until villas turn to beach and beach meets the glittering turquoise hues of the Tyrrhenian Sea. Are you ready for the Italian dream?

I certainly was. My friend and I had decided to take a road trip down Italy’s west coast for a few weeks and, of course, my most anticipated stop was Positano, one of the famous cliffside villages along the Amalfi Coast. I was beyond ready, armed with a whole folder of saved photos on Instagram from other people’s picture-perfect trips to the postcard town. Skippered yachts, Aperol Spritzes on hotel balconies, lounging under striped umbrellas on the beach – we were about to attempt it all. But, here’s the catch: we were trying to do it on a semi-broke student’s budget.

Is it possible? In all honesty, it was a stretch. First things first: we managed to bag ourselves a (vaguely) good value apartment in the hills overlooking Sorrento, about a 15-minute drive from Positano and a two-minute walk to the public bus stop. Unless you want to pay an arm and a leg for the very limited in-town parking, the public SITA bus is the way to go, but unfortunately, it’s not the most reliable of systems, especially in high season where tourists outnumber bus seats by 50 to 1.

On the first day we tried to figure out the bus system. Rule number one – you can’t buy tickets on board. We were trying to beat the crowds, getting up at an ungodly hour for a holiday but feeling very satisfied with ourselves, until we realised the closest tabac (where you can buy bus tickets) wasn’t yet open. After wandering down the streets of San Pietro, missing the bus we were meant to catch, we stumbled across a run-down hotel where the receptionist amazingly sold bus tickets.

A breathtakingly beautiful pastel-coloured town comes into view, elegantly sprawling down the cliff, until villas turn to beach

Tragically, she wouldn’t take card. God, a millennial’s nightmare – especially when you’ve gone all the way to get yourself a highlighter-orange Monzo for prime student-abroad aesthetic. Thankfully, we scrambled together some loose change from pockets and bum bags and were able to get back to the stop. Yet tickets, apparently, were only half the battle. The first bus that came sped right past us, the driver not even batting an eyelid at our desperate waves, which swiftly turned into offensive hand gestures. (In hindsight, I do apologise. It’s definitely not his fault that there are too many tourists on the Amalfi Coast.) But, finally, after another 20-minute wait, we were en route.

We got off at the edge of Positano (most of the town is pedestrian only) and began the descent down the many, many steps carved into the streets. We weaved behind floral-covered verandas and boutique hotels, and past busy restaurants dishing out fresh scialatielli ai frutti di mare. I don’t know how they do it, but somehow the whole town smells like limoncello. I mean, of course Positano smells nice, but it’s so gracefully beautiful and elegant that even the air has to have a charmingly sweet aroma.

The streets were crawling with tourists ready for a day of sunbathing, strolling and stuffing their faces with pasta. It seemed absurd that there could be so many people in a town of so few square feet, but, after basically being “influenced” by endless photos of Positano, I really couldn’t be complaining about the crowds.

But what actually is there to do in Positano? Truthfully, not much, and therein lay the crux of the problem for the slightly broke student traveller. It’s one of those slow-paced holiday destinations where all you want to do is rent a sunbed, neck Campari sodas and visit different fine-dining restaurants each night.

You can of course easily visit the neighbouring towns by bus. I’d highly recommend Ravello. It’s a quiet village, hidden up in the cliffs with unbeatable views of the coast, and it’s worth the hike up from Amalfi if you’re down for it. (It also cancels out the pizza you had for both lunch and dinner yesterday.) If you have spare cash to splash you can rent a boat and spend the day lazing in the sun exploring the coast by sea, or take an excursion to Capri, Tiberius’s famed island for debauchery, and now the favoured yacht-docking spot for the rich and famous. 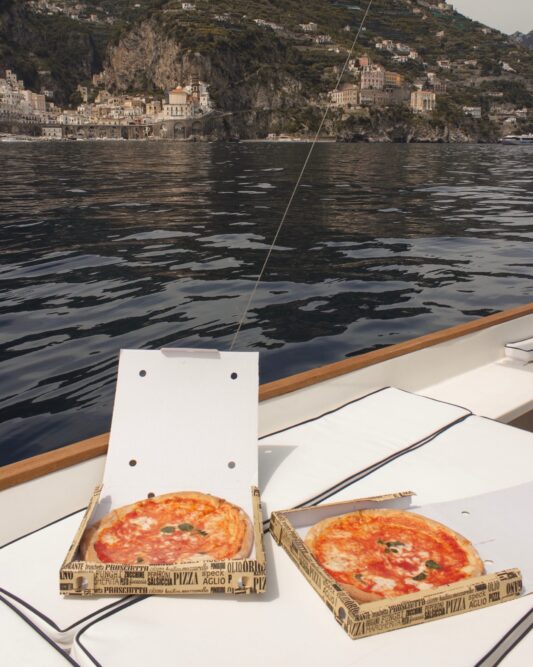 If you have spare cash to splash you can rent a boat and spend the day lazing in the sun exploring the coast by sea.
Moya Mawhinney for The University Times

After having come from non-stop sight-seeing in Rome, I was more than happy to spend a few days doing very little. For the unbeatable price of zero euro we threw our towels down on the Spiaggia Grande, the main pebbled beach (that means no sandy sandwiches, yay) with the iconic view of the cascading terracotta and pastel-tinted houses. We brought an impeccable supermarket picnic of pesto, burrata, bread and beer, and entertained ourselves between swimming in the crisp, clear waters and indulging in non-reading-list-required books.

You can bet we were feeling pretty good about ourselves. It felt delightfully sinful to be having such a nice time in such an ostentatiously expensive place for only the few euros we spent on the bus and food.

And maybe we got too cocky.

That evening we decided to celebrate our excellent afternoon in the sun with a cocktail and a view, just in time for sunset. I’m not saying we didn’t do our research but after a few wrong turns we ended up in the terraced-bar-slash-Michelin-star-restaurant of Le Sirenuse hotel, famed for its luxury, and not its affiliated cocktail bar Francos, which promised a fairly reasonable (for the Amalfi Coast) menu of €8 glasses of wine and €11 cocktails.

The receipt came in a gold-foil-lined envelope that called me stupid and broke on so many levels. Alas, this is the Amalfi Coast

We were ushered to an unbeatable table overlooking the Duomo Positano and the bay, all lit up and sparkling with the golden hues of sunset. Opening the menus, we realised our mistake. Some €25 for an Aperol Spritz? We couldn’t, surely. But it was too late to leave. We were already entranced by the opulent surroundings. The waiter had also made a slightly snobby comment about us not being guests.

There and then, feeling bold, I decided to pick an expensive drink to prove the point that I could sit in Le Sirenuse and have a cocktail with a friend if I wanted. So, we did. The receipt came in a splendidly embossed, gold-foil-lined envelope that called me stupid and broke on so many levels. Alas, this is the Amalfi Coast.

Positano on a budget – can it be done? Technically, yes. Realistically, no. Maybe it’s the lingering limoncello in the air but after a few days I was ready to make a habit of spending €25 on a cocktail. It’s the kind of place you just want to spend money on. You can kid yourself by thinking you’re better than all the nouveau riche, flamboyant tourists sipping prosecco on the beach but really you kind of just wish that was you.

So, until I manage to swindle a high-paying job with my useless arts degree and am able to do the Amalfi Coast in style, I’ll hold off on returning.