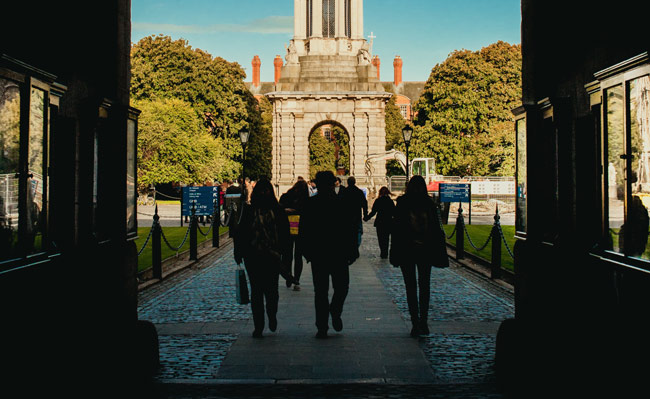 Students have blasted the College amid widespread timetabling issues for this year’s summer exams, with many fretting due to assessment pile-ups and others reporting scheduling mistakes ahead of an unprecedented exam period.

Students got their timetables yesterday for this year’s summer exams – which will take place between April 27th and May 9th, and run remotely as a result of the coronavirus pandemic.

But conversations with students and class representatives in courses across the College have revealed a number of College errors and a timetable that’s packing together exams despite the extension of the assessment period to account for coronavirus-related issues.

Many say they were already worried ahead of the exams – which they’ll complete in a remote format, new to students and administrators alike – and argue Trinity’s handling of the situation doesn’t stack up with its promise to “mitigate the difficulties” they’ll face this exam period.

Second-year students of Spanish met a timetabling error yesterday that saw them facing into a modern poetry exam on April 22nd – five days before the exam period was set to start. This meant they’d been given six days notice of the exam.

Katie Clavin, a second-year Spanish class representative, told The University Times that the issue “caused a lot of worry and upset for the class”. She added: “I think I can speak on behalf of my class in saying that we’d all organised our own study timetables and assignment schedule based on the fact that we wouldn’t have exams on the 27th.”

Last night, students set to take the exam were told in an email from Dr Brian Brewer – head of the Department of Hispanic Studies – that the “Department’s understanding, based on the Senior Lecturer’s emails, was that exams would be scheduled beginning on 27 April”.

“I don’t know why your exam has been scheduled early”, Brewer wrote, “but we will follow up with the Exams Office to find out what is going on. In the meantime, don’t panic”.

“Six days”, Clavin said, “I do not think is enough time at all to announce that we have an exam”.

Leona Coady, the director of Trinity’s Academic Registry, wrote in an email statement to The University Times: “Since publication of the timetable yesterday based on assessment requirements that were finalised last week, the Academic Registry has been working with a small number of Schools and students who brought to our attention today some challenges the timetable presents.”

“The Academic Registry is committed to resolving issues to alleviate the pressure on students”, she said, “and to this end is looking at the issues on a case by case basis and where possible they will be resolved”.

Second-year chemical sciences students are still waiting for lecture slides and other coursework to be uploaded online from classes in recent weeks.

Speaking to The University Times, Leo Monahan, a class representative for the course, said: “We still have lecturers posting content – tutorials and lectures – even though we’re meant to have two study weeks this semester.”

“We feel we haven’t really been accommodated considering the circumstances”, he said. “It’s a bit ridiculous. Like, we all expect a delay, we understand the departments must be hectic right now because of the circumstances – we allow for that – but we all thought that, given the Council approved two or three extra contingency weeks for the exams, that our exams would be pushed back to accommodate for that.”

Second-year biology students take many of the same exams as chemistry students. Aislinn Gallagher, one of their class representatives, said: “I think a lot of people were just annoyed at the mix of information.”

Students on Gallagher’s course were initially told they would have a 32-hour period to complete one of their exams, but when the exam was posted to myTCD the timeframe allocated was less than this.

“We all got a bit stressed over that”, she said. “We started emailing and it got resolved really quickly.”

An email sent to biology students – signed by Kevin Devine, the director of biological and biomedical sciences, and seen by The University Times – said: “We are aware that the exam timetable published on mytcd.ie is different from the details you were given last week.”

“Please be assured that we are sticking with the original plan and you should follow the instructions originally issued by the Biology Teaching Centre”, Devine said.

Gallagher added: “I think a lot of people were just annoyed at the mix of information. It’s obviously a very stressful time right now. Little things like that can stress people out so quickly. We were told two different times – but once it was clarified everyone seemed to be fine.”

We feel we haven’t really been accommodated considering the circumstances

Nina Chen, a second-year chemistry student, said that “the information that the Academic Registry gave to us, and that we got from the co-ordinator, were just inconsistent”.

“And it’s also just a big inconvenience. It’s already so stressful just to try to plan and prepare.”

Third-year maths students, meanwhile, were originally scheduled to start their exams next Friday, three days before the assessment period.

They were told today by Paschalis Karageorgis, the director of undergraduate teaching and learning in the School of Mathematics, that the exams – which they’ll complete over the course of a week – have been pushed forward until April 27th.

“Some of you have expressed your concerns about the early start of our take-home exams”, Karageorgis said, “so I have decided to shift the start date by 3 days”.

For Conor O’Malley, a final-year student of economics and political science, the issue came in the overlap between his first and second exams.

“There’s a clash because my first exam is a 48-hour exam from Monday the 27th until Wednesday the 29th, and then my second exam is due to start on Tuesday the 28th and end on Thursday the 30th”, he said.

He said his biggest frustration about the exams is “that they’re so soon, that they overlap and that it seems to fly in the face of what they [College] were trying to say less than a week ago”.

Fionn Casey, a final-year PPES student, had a similar issue, with two exams on May 5th that he’s expected to complete in 48 hours. “I was honestly very shocked”, he said of opening his timetable. “It seems so obviously unfair that I’m honestly surprised that they would even announce something like that.”

Casey said the problem with putting the two exams together – which some students won’t have to sit alongside a second exam in the same timeframe, depending on the modules they’re studying – isn’t that we don’t have enough time to do the time to do the exams”.

“The problem is that I will have half as much time to do the exam as everyone else.”

It’s not impossible, because the exams were only meant to take 90 minutes anyway, but it’s just we’re not given the flexibility we thought we were going to get

He said the timetabling is “not impossible, because the exams were only meant to take 90 minutes anyway, but it’s just we’re not given the flexibility we thought we were going to get”.

“It’s stupid that we have exams starting over the course of three days, yet the week after – the second week of exams – we just have a blank week where multiple exams could have been fitted and evenly spread out. That just wasn’t taken advantage of.”

Heloise O’Sullivan, a third-year global business student, described a “fiasco” that took place when she was registered on her timetable to sit an exam for a module she hadn’t taken.

“One of my modules has no exam (just a final essay), so then I worried that maybe they’d registered me incorrectly for that class instead of the one I’m actually taking”, she wrote in an email to The University Times.

“I double checked my module choice form to ensure I hadn’t made a mistake. I emailed the professor to ensure I was registered on her Blackboard, as well as academic registry and my undergraduate dept. The professor replied saying that she was surprised that I didn’t know what classes I was taking.”

“This only added to my stress, so I double checked the timetable, but it had disappeared”, O’Sullivan added.

“This whole fiasco so close to the exams made me immensely stressed, anxious and worried and I missed out on a day of essay writing and study.”