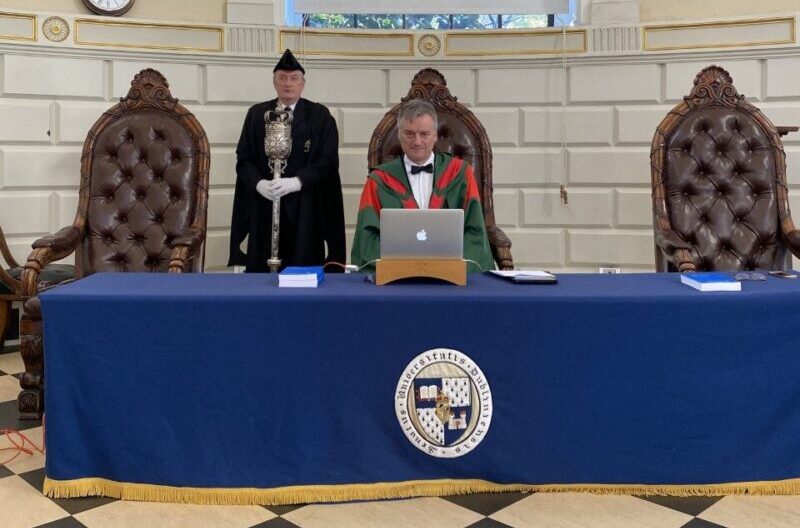 Some 532 Trinity students have been conferred with their degrees in absentia in a commencement ceremony on Zoom, marking the first time a graduation has been held online.

Chancellor Mary McAleese conferred the degrees in the traditional Latin, in a ceremony that will be later uploaded online, according to Provost Patrick Prendergast.

Prendergast wrote in a tweet that McAleese had conferred 532 degrees over the online video platform.

The ceremony was “all done in Latin”, he said. “Congratulations to all our new graduates. The recording will be put on the web.”

Last month, The University Times reported that all in-person commencement ceremonies were cancelled, with graduations to be live streamed instead and students conferred with their degrees in absentia.

An email sent to all staff and students, signed by Senior Lecturer Kevin Mitchell and College Secretary John Coman, said that “public ceremonies are not possible” as a result of the coronavirus pandemic. College contacted graduands set to receive their degrees in April to ask their permission to be conferred in absentia.

Mitchell and Coman said College hopes to live stream the ceremonies “so that graduands can hear their name being entered into the University record”.

Yesterday, 190 medicine students in NUI Galway graduated early to increase the number of doctors available to work during the coronavirus pandemic.

The Irish Times reported that the college held its graduation ceremony over Facebook live stream, after the students’ final exams were held earlier than scheduled to allow them to enter the workforce as quickly as possible.

Dr Michael Ryan, the executive director of the World Health Organisation’s health emergencies programme, and a graduate of NUI Galway, told the students in a recorded message that “it would be unusual if you weren’t afraid”.

“You are now the heroes of the world. Learn well, protect yourselves and protect others.”

Minister for Health Simon Harris also addressed graduates in a recorded message, asking them to “come work with us as we fight to save lives in our country and to keep our people safe”.