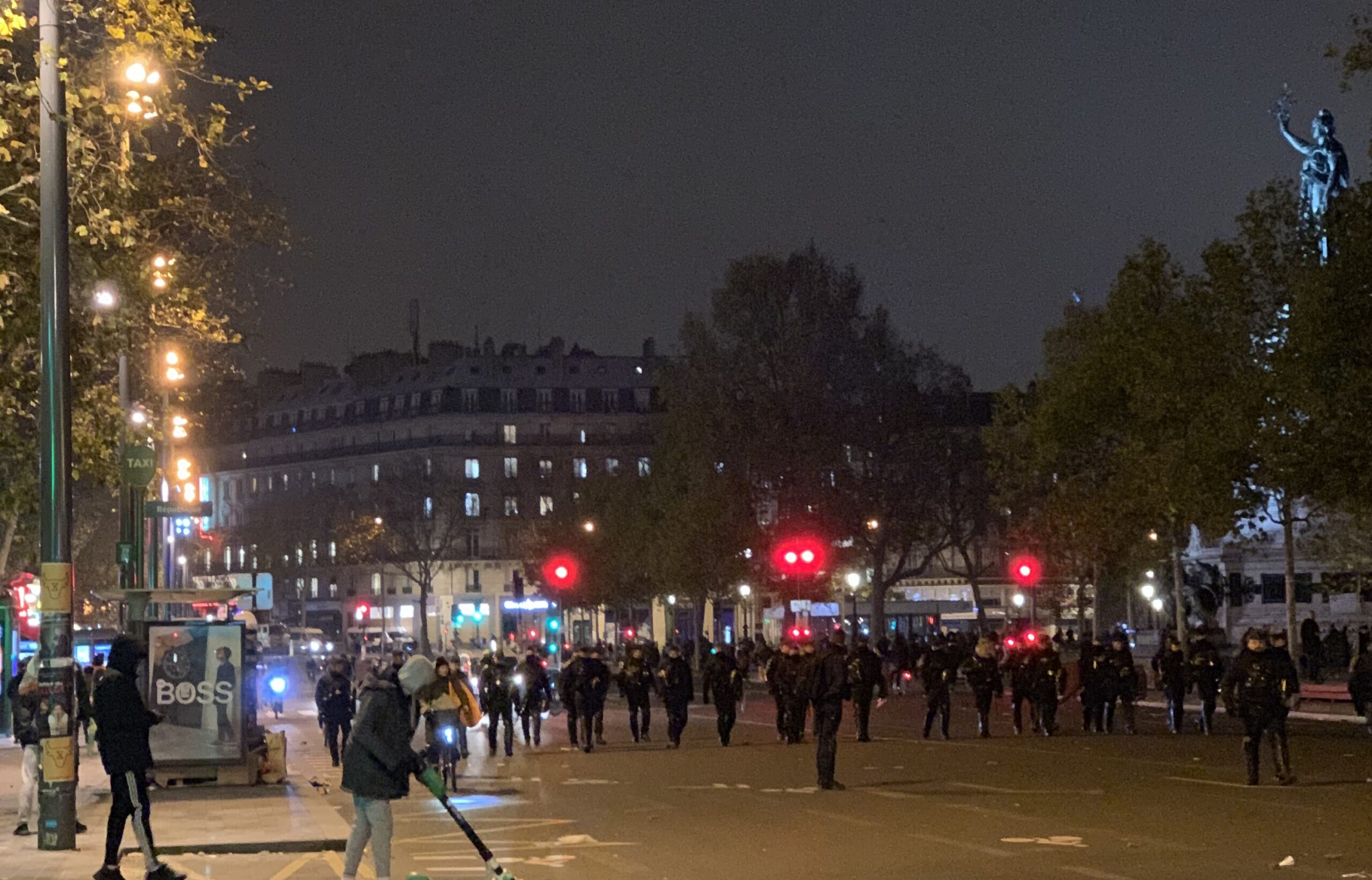 Yellow Vests and Unrest in the Home of Protest

After spending the first semester of this year on Erasmus in Paris, Ross Malervy reports back on a city in a state of perpetual volatility.

I’ll admit it: I knew little about France before deciding to go on Erasmus to study there. In fact, I had never even been to France until I started studying at Sciences Po, Paris, an internationally renowned university of political science where 50 per cent of students come from abroad.

Most of my classes were in English, and I lived in the Irish Cultural Centre in the Fifth Arrondissement, an English-speaking area in the heart of the Latin Quarter. This part of Paris was rich, filled with tourists and situated near good restaurants and bars. In essence, it was a bubble. But outside it lay a country seething with anger and resentment – and it was impossible to ignore it.

I now realise that even if I had simply tied myself to the university, gone to Erasmus events and stuck with other international students, I still wouldn’t have been able to shut my eyes to the acrimonious realities and burning grievances that currently grip French society. It’s no exaggeration to say that France in recent times has been in a state of tumult, and with insurrection raging all around me, wilful ignorance wasn’t an option.

Sciences Po is the epitome of the establishment in France. It is one of the “Grand Ecoles”, the top private universities in the country, and seven of the last eight French presidents studied there. French universities are notoriously politicised and the politics of each university is public knowledge. For example, Sciences Po is thought to be somewhere between centre and the centre-right on the political compass, whereas Paris VIII is considered to have more left-wing values.

France in recent times has been in a state of tumult, and with insurrection raging all around me, wilful ignorance wasn’t an option

When I got to explore the city myself, and practise my broken French with the locals, I was very quickly struck by the deep fissures in French society. The northern reaches of Paris, past Porte de Clignancourt and into Goutte d’Or, reveal a very different city to the salubrious Latin Quarter. These areas are very deprived, with high rates of unemployment and an ethnically diverse makeup. Many of these people feel as though they have been left with no choice but to protest by the French political classes.

I lived close to the Jardin Du Luxembourg and soon became accustomed to large groups of activists rallying in the area, hoping to stir some dissatisfaction and fury in the locals that had long been lying dormant. Seeing armed police everywhere I looked became something of a quotidian affair – my new normal.

France has a system called the Vigipirate, which defines different levels of emergency by dividing the threats into separate tiers. Due to the constant demonstrations in France, it became extremely common to see Vigipirate soldiers from the French army in every public space – from the Louvre to the Metros.

Soldiers were among the first people I saw upon arriving in France at Beauvais airport. I jokingly said to many French people that their National Police, who are armed, are their equivalent to special force Garda, their Gendarmerie are equivalent to the Irish army and the Vigipirate is incomparable to anything we have. I found living in a city with a constant armed presence more unsettling than it was reassuring, but many French people see it as a necessity.

A further source of daily consternation was the liberal placement of riot police at every large public demonstration. Many of the protests were quite peaceful but others were quite violent – a problem exacerbated by this heavy-handed presence.

It is a well-known stereotype that the French love to protest, but 2019 was a particularly active year in France. Paris averages 11 demonstrations a day, ranging from the quite small to the simply enormous. During my time in the city, I witnessed small stalls protesting political prisoners in Iran and missing Tamils in Sri Lanka, as well as large commemorations for the massacres of 1961 – where the French police, lead by Nazi collaborator Maurice Papon, murdered over 200 Algerian protesters in Paris and threw their bodies into the River Seine. However, most of the large protests are based on current and local grievances. 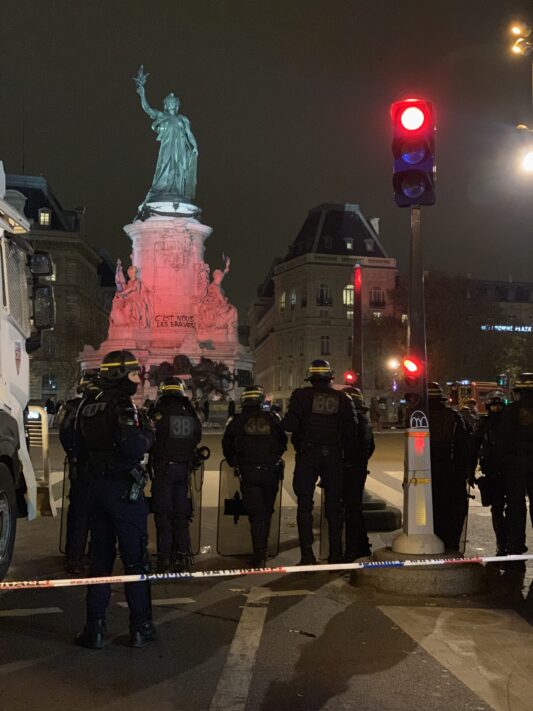 “Due to the constant demonstrations in France, it became extremely common to see Vigipirate soldiers from the French army in every public space.”

One of the most memorable protests was the so-called “Rave against Climate Change” last September, which saw tens of thousands of people walking through Paris with large speakers, dancing and marching to raise awareness of the crisis.

Another similar, but much more effective, demonstration was the Extinction Rebellion protest that took place in October. The demonstration took place in the very heart of Paris, where most of the Metro and bus lines meet. Protesters barricaded most of the bridges to the island and even directed traffic, effectively shutting down the city centre for hours.

Paris is covered in political graffiti, but by far the most prolific in this most artistic of political actions is the Noustoutes movement, which translates roughly to mean “all of us”. The movement is lead by feminist groups, which could be seen as a response to the country’s spiralling epidemic of domestic violence against women.

At least 120 women were killed by their partner or ex-partner in France in 2019, so the city is coated in black-and-white graffiti of various sentences such as “elle la quitte, il la tue”, meaning “she left him, he murdered her”. November saw the Noustoutes movement plan its largest Paris protest, with more taking place throughout the country. Tens of thousands of people demanded a response from the government and society about why domestic violence was destroying the lives of so many French citizens.

The protests I witnessed in France were incomparable to any of the movements I have seen in Ireland. For instance, huge crowds assembled to protest against reforms to IVF laws that proposed to give lesbian couples access to the treatment. Conservative protesters took to the streets under the banner of France’s national slogan – “Liberté, Égalité, Fraternité”, or “Liberty, Equality, Brotherhood”.

The “gilet jaunes”, who generated a lot of coverage in the press in 2018, still represent a strong political movement in France. Outside Paris, many demonstrations still take place every week.

I found living in a city with a constant armed presence more unsettling than it was reassuring, but many French people see it as a necessity

Though it initially assembled as a response to a regressive fuel tax introduced by Emmanuel Macron, the movement has since escalated into an anti-establishment force riding on widespread malaise. Last November marked the first anniversary of the birth of the protests, and the occasion was marked by a massive protest in Paris. I remember walking near Place d’Italie and seeing smoke and hooded individuals in the distance. The movement has widespread support within France and it shows no sign of wilting.

The largest protest of the year, though, was a mass strike action taken by Parisian public transport workers and national railway employees from December 5th. Macron’s government had been attempting to change the pension system for these workers and increase their retirement age, so they mobilised and called the largest mass strike in France since 1995.

“La Grève” (the strike), as it is known, quite literally paralysed the city of Paris for my last month there. Nearly all the Metros and most of the bus routes were either completely shut down or under massively reduced service. Many flights were delayed as air traffic controllers also went on strike. Science Po’s end-of-term exams had to be run online, as it became impossible to reach the exam hall.

The strike has also been accompanied by several mass demonstrations in solidarity with the striking workers, and it has become extremely difficult to even get around the city. Its reverberations were also felt in France’s political sphere, with Jean-Paul Delevoye, Macron’s cabinet member for pensions, resigning over the strike. It is estimated that between 800,000 and 1.5 million people have protested across France, and there is no evidence of the political unrest subsiding any time soon.

My time in France was marked by a growing discontent in the country – across all communities and all places. From Noustoutes, to the Gilet Jaunes, to La Grève, it would have been impossible to avoid French politics, even if I had wanted to.

“La beauté est dans la rue”, which means “the beauty is in the streets” is a famous slogan that emerged from the May 1968 protests. During my time in France, it seemed as pertinent a tagline as ever.