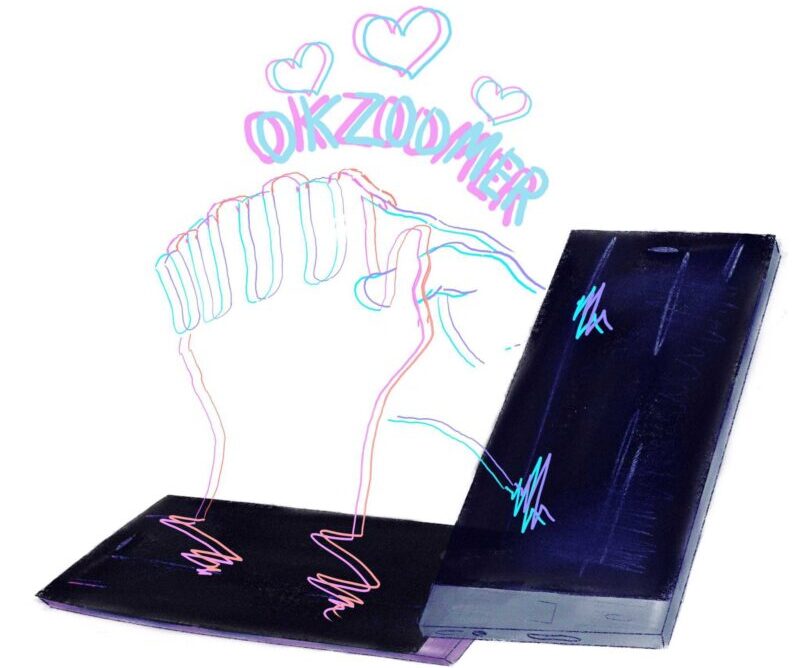 Dating apps have seen a surge since lockdown came into force, with more people than ever swiping right on dating apps like Tinder and Bumble. But if Tinder isn’t your thing, there’s plenty more options – including the internet sensation Zoom – to bring virtual dates into your living room, kitchen and (daresay) bed.

It’s happening as academics around the world explore the long-term consequences of isolation on dating and romance.

OKZoomer is a virtual Zoom dating site created by two Yale students, Ileana Valdez and Patrycja Gorska. It asks users to complete a Google Form, in order to be matched up with others on either a romantic or platonic basis, and Valdez tells me that the aim of OKZoomer “is to connect people based on our algorithm and non-superficial biases”.

The inspiration behind the idea was quite simple. When memes were created and spread about how upset many college students were about no longer being able to find love on campus, Valdez and Gorska sought to bring that love to their homes – virtually. Seeing the potential of Zoom, they launched OKZoomer with the aim of dissipating some of that disappointment.

Shortly after they set up and shared the Google Form, it went viral. Students from over 200 colleges in the US have signed up to be matched on either a friend or romantic basis.

But the creation of the site was inspired not only by memes but also by popular dating shows such as “Love is Blind” – which, like OKZoomer, uses non-superficial biases to match couples. In contrast, mainstreaming dating apps, such as Bumble and Tinder, centre around physical appearance. Valdez says: “We’re trying to help people find something else to connect on and help them build relationships off of more than just a face that you are swiping left or right on.”

OKZoomer, then, is a platform of its time – and of its generation. Valdez says: “OKZoomer definitely exists because of the Gen Z desire to be connected all the time.” At a time of physical disconnection, we have flocked to online sources for social connection more than ever before.

“We hope that people realise from our app that they can associate with people based on non-superficial biases and still build really beautiful friendships or romantic relationships”, Valdez says. Aspiring for people to look beyond their usual cliques or groups to seek friendships or relationships, Valdez says that she and Gorska “hope people realise that they don’t have to be locked into the echo chamber”.

If Valdez and Gorska are touching on universal impulses with their site, then it’s hardly surprising that they’re not the only students creating platforms allowing others to find romantic connections in lockdown.

MBA Blind Love, a platform for US students on master’s of business administration (MBA) courses, is another fish in the sea for students looking for socially distanced romance.

Anna Li, an MBA student at Pennsylvania University’s Wharton Business School and one of the creators behind MBA Blind Love, tells me about the roots of the idea – and the similarities with OKZoomer become clear. “The initial idea”, she says, “was to take advantage of COVID-19 and social distancing to get people to branch out of their social circles and meet other people”.

After setting up the Google Form, the creators found themselves inundated with responses from MBA students across the country looking to find love.

But if MBA Blind Love is a dating platform, then it comes with a twist. After entering your details, you get matched up in the next round and in true “Love is Blind” style, you can only disclose limited personal identifiers for the first week of being matched up. While dating culture nowadays can often be centred around dating apps focused on speedy hookups, Li sees MBA Blind Love as a counterpoint to that culture.

For Li, the platform takes “a more values-based approach to dating, and the blind aspect has forced people to focus more on the content of the conversation”.

Like Valdez, Li isn’t a fan of the superficiality that characterises modern online dating: “When you do have photos involved, you can’t help but have people swipe left or right just based on physical appearance as opposed to getting to really understand the person and their thoughts.”

It’s very frustrating to not have touch be part of your relationship, and I have heard that expressed – especially among young people

On the future of online dating, Li says: “I think COVID-19 could potentially change the way we interact with each other more permanently.” It’s a compelling argument – and it’s being backed up by academic studies.

Prof Tiffany M Field, the director of the Touch Research Institute in the University of Miami, is carrying out a “Covid-19 Lockdown Activities Survey”.

Field, who works in the university’s Miller School of Medicine, says her study has found people who are spending lockdown alone are “a little more stressed out” than those with their families or loved ones. She says she was unsurprised that people had reported receiving less touch than normal.

The consequences of this, she says, are far-reaching – touch is one of life’s most fundamental aspects, and with social interactions as simple as handshakes now facing an uncertain future, it’s easy to imagine an increase in isolation and loneliness. Field says it’s “very frustrating to not have touch be part of your relationship, and I have heard that expressed – especially among young people”.

Studies on loneliness aren’t just happening west of the Atlantic – they’re taking place in Ireland, too. Research carried out by Trinity’s Centre for Global Health has found that in the first wave of results from the Irish COVID-19 Psychological Survey, 41 per cent of respondents reported feelings of loneliness. The mental and emotional implications are very real. Field says lockdown isn’t just causing problems for people in the here and now – it’s causing them to be “more reflective about their lives”, and reconsider many news aspects of them.

“Lockdown has given people a pause – time to go deep within themselves and think about what they’re going to do when this is over.”

For the first time in human evolution, the affinitive touch that we would take for granted is now being restrained and, in some cases, prohibited

Field isn’t the only academic doing research on the effects of the coronavirus on how we interact. Francis McGlone, a professor of neuroscience at Liverpool’s John Moores University, is currently running a study on touch deprivation because of the pandemic. McGlone’s study, offered in four languages, reaches across cultures. Its global outlook will offer an insight into how different people in countries and cultures are dealing with lockdown.

McGlone tells me that “the lockdown has changed the whole tactile dynamic across the planet”. His study isn’t purely sociological, though – he’s adopted a neuroscientific approach that he says has its basis in the fact that “all social mammals have a nerve fibre in the skin that responds to gentle affinitive touch”.

While self-isolation is of course the best strategy for containing a virus, it is important to note that it gives us little opportunity to connect with others and so we should be aware of how it impacts our well being. McGlone says: “For the first time in human evolution, the affinitive touch that we would take for granted is now being restrained and, in some cases, prohibited.” MGlone and his team are looking into how that may be affecting people’s mental health, amongst other things.

Indeed, as we shift our communication online, it means a large part of the way in which we connect and socialise with others is no longer done face-to-face in a tactile environment. The full impact of these changes remains to be seen – on our wellbeing, and our ability (or otherwise) to come closer together by staying apart.