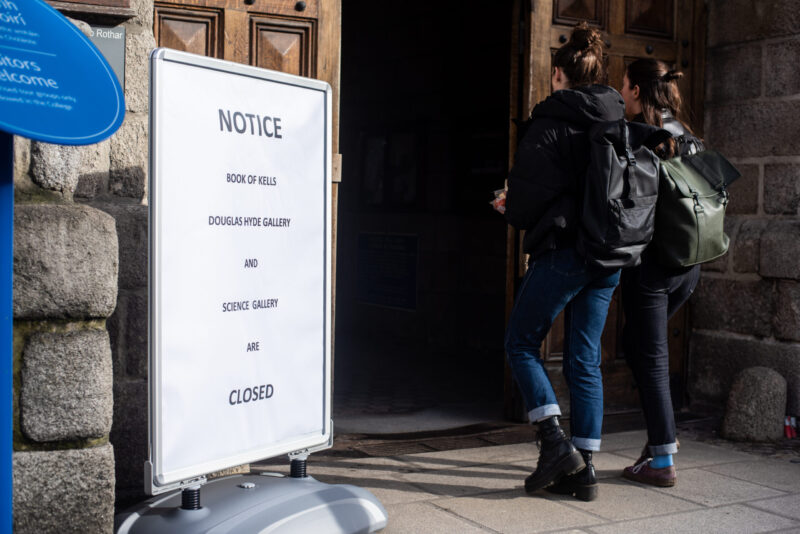 Although it means that politicians won’t get to send their annual tweet wishing students well in the leaving certificate and radio stations will lose a month of content from disgruntled parents, students and those with no affiliation to the exams whatsoever ringing in to complain about it, the decision taken by the government today to cancel the leaving certificate exams and replace them with calculated grades has been painted by the media as one of relief for students. Although some will be ecstatic and others disappointed with this decision, for most sixth-year students, the relief of finally having an answer after weeks of uncertainty will surely outweigh everything else, at least for now.

Although this marks a final clarification regarding the exams, issues surrounding entry to third-level education remain vague as ever. With the leaving certificate existing as a stepping stone for entry into higher education for the majority of students, the lack of clarification regarding how these students will begin third level seems to negate the helpfulness of elucidating the exams themselves. Here’s how everything stands with regards to third-level entry for the 2020/21 academic year.

CAO Timeline Still Up In The Air

No date has been finalised for the release of results to students under the calculated grades system. Although McHugh has said he would like it to be as close as possible to the traditional mid-August date, it seems more likely that students will receive their calculated grades in early September.

In either scenario it is unclear when CAO offers – which traditionally come a few days following results – will be issued. Students’ calculated grades will be transferred directly to the CAO for points calculation in the same way that examination results usually are. The CAO timelines will aim to run as close to normal as possible so students have the time to take up offers and transition to further education.

The Irish Universities Association (IUA) today confirmed that calculated grades will be used to determine admissions, and said that it hopes for “early confirmation by the Department of Education and Skills of the date by which the calculated grades will be made available to the CAO, so that new university students can begin their studies as soon as possible in the new academic year”.

For now, the change of mind facility for the CAO will operate as usual, meaning applicants have until July 1st to change their preferences.

As well as a lack of clarity regarding the CAO process, university applicants have not been told when they can expect to begin their further studies. The government’s website says that while it “can’t be specific” about what date first-year students will start college, it will most likely be in late September or early October.

Earlier today, this paper reported that Trinity has said that it is “too early to say” when first-year students will be admitted to College in the next academic year.

Tom Molloy, Trinity’s director of public affairs and communications, told The University Times this afternoon Trinity was still working through various issues caused by the new leaving certificate format and could not say when first years will start college.

This move marks a change from colleges’ initial plans for the start date for incoming freshers. In April – while plans to hold the leaving certificate over the summer were still in place – Taoiseach Leo Varadkar said that incoming freshers were likely to start their college term “in October or November”.

What of SUSI grants and free fees after appeal?

The new arrangements for the leaving certificate means that students who start college next year but get an improved course offer after appeal will remain eligible for “free fees” and SUSI grants as if they were starting college for the first time.

The government’s website says that under its new plans for the leaving certificate, students can still avail of €3,000 fees – not normally available to those starting a course for the second time – and can apply for the SUSI grant “as appropriate”.

As a part of the appeals process, a student who remains dissatisfied at the end of the process, can seek verification of the department’s processes by independent appeal scrutineers. The CAO will continue with the norm of subsequent rounds of offers.

A Long Wait For Defiers Of Calculated Grades

At a press conference announcing the decision today, Harold Hislop, the chief inspector of the Department of Education, confirmed that students who don’t opt for calculated grades will not be able to start college next semester.

Students who opt to sit the leaving certificate exams at the later date and receive an improved CAO offer as a result of those results will receive a deferred offer to start their course in 2021, meaning that students will not have to wait until the following August for the release of CAO offers.