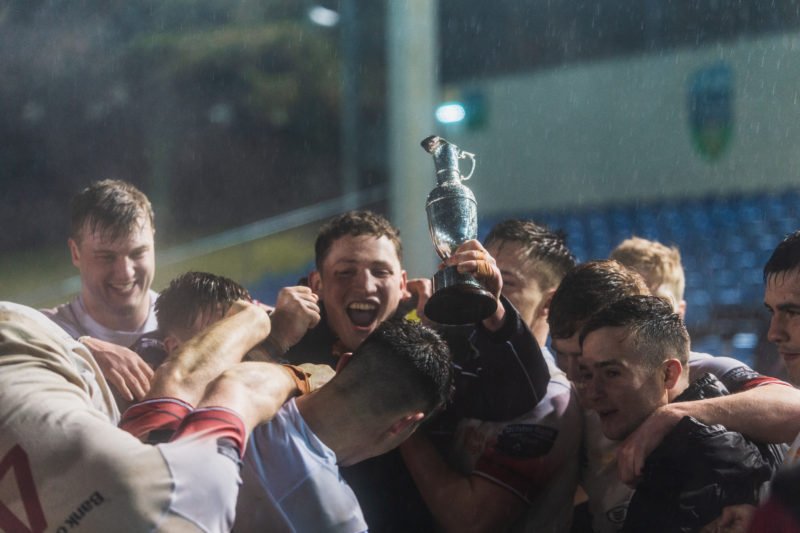 The rain had been falling for about 15 minutes when Rowan Osborne ducked through the University College Dublin (UCD) defensive line and saw the pitch open up in front of him.

Half-time was approaching on April 5th, 2019, and Dublin University Football Club (DUFC) Men were down 6-0 in a critical All-Ireland League (AIL) Division 1A clash against their oldest rivals. Max Kearney was coming along with Osborne for the trip. The latter waited, waited – and waited again – before offloading.

The ball bounced off Kearney’s torso and ricocheted forward. As quickly as the move had begun, it was over. Kearney lay down on the pitch prone, hands covering his face.

It was a blow. The build-up to Osborne’s break had been typical of Trinity’s display to that point. Their failure to score was a sign that maybe, tactically, Smeeth and co had got it wrong. DUFC were running themselves into the ground, contesting every ball with a ferocious intensity. Their rucking was desperate, and exhausting. For scores, they were relying on open space and having the pace to exploit it.

For the casual onlooker, the first 30 minutes made it obvious that both these sides were almost perfectly matched. In the scrum, distance gained was measured in inches.

The difference? UCD’s game had been much less expending than Trinity’s, and in the first half, it had proved the more effective approach. The Belfield men were quick to put boot to ball, and it was working. On a number of occasions, fly-half Conall Doherty looked for blue shirts in the corner of the Trinity 22, probing economically.

The terms of the match changed drastically five minutes after Osborne’s break was scuppered by a knock-on. The Leinster scrum-half was again the talisman, making ground down the flank. Rob Russell was on his shoulder the whole way, and dived over five to narrow the gap to one. Trinity suddenly had something to show for the physical strain they had put on themselves. Now they had UCD where they wanted them.

In the second half, the visitors were smarter with how they used the ball. The rain wasn’t letting up any time soon, and Trinity took a leaf from their opponent’s book, with a more liberal approach to kicking the ball.

The introduction of James Fennelly was part of the tactical switch. Fennelly began to ask questions of UCD that his side had failed to do in the first half. The Trinity backline gave chase as he continuously launched the ball deep into UCD territory. 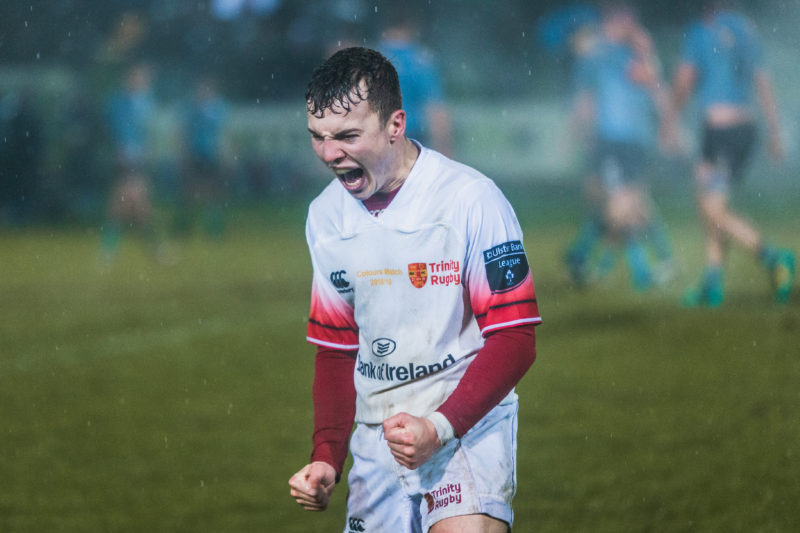 Winger Ronan Quinn played a huge role in DUFC’s second try, which was scored in the end by Dan Sheenan.
Ivan Rakhmanin for The University Times

Osborne also began to opt for the box kick as an offensive approach – a pragmatic alternative to Fennelly’s long-range efforts. The scrum-half was popping up everywhere, mopping up in the breakdown and leading the charge.

Trinity’s second-half display was effectively a happy marriage between the frantic energy of the first period and the distance kicking introduced after the break. The shackles had come off – if their running game had seemed forced in the first half, there were no stutters in the second. They knew how they needed to play their opponents, and the UCD Bowl’s greasy surface.

In essence, Trinity looked more sophisticated than their opposition. They understood their adapted gameplan, and they had more in their arsenal.

One of the game’s defining moments saw DUFC at their most hybrid – and their most effective. The visitors had gone ahead courtesy of a Fennelly penalty, and UCD had come back looking for blood. Pummelling the Trinity backline with pick and carries, UCD were gaining distances little by little.

Trinity were snapping at the ball in every breakdown of play, however. Digging for the ball with the same intensity afforded to the first phases of the match, Trinity were rewarded for their persistence and forced the turnover. Roars of approval met Stuart Gaffakin’s whistle. With 10 minutes to play, they had one had on the Colours trophy.

Trinity’s seemingly endless reserve of energy confirmed the victory. Not long after the decisive turnover in play, Dan Sheenan forced the ball over the line at the other end, before Fennelly added two points from the tee. With the final score reading 18-12, DUFC created a small bit of history – this was the first Trinity team to ever claim a Colours victory at the Belfield Bowl.

The 2018/2019 season will not be forgotten by those who frequent College Park on Saturday afternoons for a long time, and this victory will be counted amongst the most famous outings of that campaign.