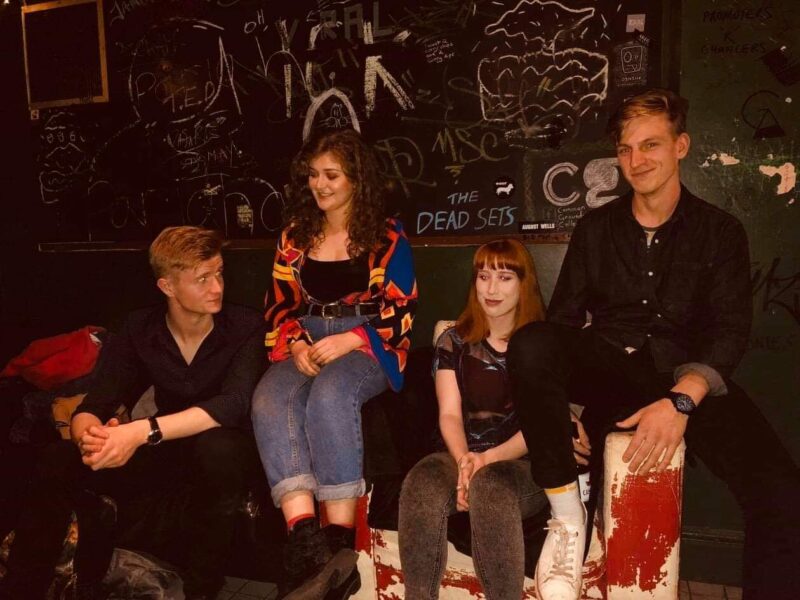 With annual festival and summer-time gig cancellations now part of life in lockdown, some Dublin artists have opted to make use of such restricting times. Experimental rock group Ghostprint are among this cohort: they released their debut EP, The Bluest Blue, on April 10th.

Speaking to The University Times, guitarist Fiachra Robinson emphasises the silver lining to isolation for the band, in terms of co-ordinating the release of The Bluest Blue: “The quarantine has actually been pretty good for us. It gave us a chance to put all of the finishing touches together for the EP – to release it properly, with a little bit of PR – so that’s been great.”

Ghostprint were started by Robinson and Trinity student Hannah Kate Ní Shioradáin, the band’s drummer and primary songwriter. The ensemble made an immediate impact on Dublin’s music scene, and supported Declan McKenna and Otherkin at Longitude in 2016.

The circumstance arose from a battle-of-the-bands-style competition over a few months, which vocalist Sophia Desay recalls fondly: “It was more like a positive experience of having loads of young songwriters in the same place. It was nice, rather than competitive.” Shortly afterwards, Ghostprint added current bassist Fearghus Montague.

You have this bridge that in some of the songs is almost a little bit jarring compared to the rest of the song. But I think it’s quite refreshing

The Bluest Blue was recorded and produced by a friend of the band, Luke Carey. Tracking took place mostly in Carey’s bedroom, and the unconventional recording method led the group to be as efficient as possible: “I think I might have done two sessions in there with just him”, recalls Montague. Members would often record their parts individually.

The bassist emphasises that the group were prepared for such diligence through their extensive gigging: “That was music that we had performed to quite a high standard. I think we had planned the recording to a certain extent, in that six months previously we were trying to get a run up of gigs to give ourselves momentum going into it.” Robinson agrees: “Everyone knew what they were doing basically.”

Desay also affirms that avoiding the route of self-production provided the tracks with a constructive fresh set of eyes in the form of Carey: “He didn’t have a reference of what the songs sounded like, other than maybe hearing us live once or from the odd SoundCloud track that we had. So I think that gave him a little bit more creative license as well.”

Musically, The Bluest Blue sees Ghostprint employing a variety of techniques to convey a pensive, almost hypnotic tone. Bearing reverb-adorned guitars and meticulous cross-stick percussion, tracks often see a gradual build-up in intensity – with the crescendo reaching its apex following the bridge of most songs.

“You have this bridge that in some of the songs is almost a little bit jarring compared to the rest of the song. But I think it’s quite refreshing – in ‘Camouflage’ you hear that a lot. I think that it’s a structure that we’ve fallen into unintentionally, but it seems to work for us well”, says Desay.

I feel like having a bass playing just root notes is kind of a waste of an instrument in a way. You’re just filling space

While the feature is almost innate by now to the band, the aspects of the tracks are still crafted with the live nature of the group in mind. “I think we jammed out some of that stuff quite naturally”, recalls Montague.

With Desay predominantly on vocals, much of the band’s melodic instrumentation comes down to a single guitar and bass. In light of this, Ní Shioradáin makes a point of making each aspect of the band’s sound purposeful in her songwriting: “I feel like having a bass playing just root notes is kind of a waste of an instrument in a way. You’re just filling space, which is unnecessary.”

Robinson says Ní Shioradáin’s transparency while writing, coupled with Montague’s keen ear, results in such novel melodies: “I think our basslines actually are probably one of the things that make our music pretty interesting – it’s not just conventional 1–4–5 progressions. It’s pretty different.”

The band are unanimous about their personal highlight of the latest release. Ní Shioradáin muses: “I think ‘Blue’ is my favourite to play live, because it’s really cool as a songwriter to hear people singing your songs.” The drummer is referring to the rich overlapping vocals on the track from Desay, Montague and Ní Shioradáin herself – employing audiences to often sing along, as recounted by Montague: “It always gets a great reception, overwhelmingly.” Desay nods in agreement: “It’s really nice to have a mix of different vocals on the track. It gives it a little bit more than a lot of the other tracks have, which is really cool.”

With thoughtful melodies and gratifying frameworks, The Bluest Blue stands as a beloved representation of Ghostprint as a group to date. The EP is available on major streaming platforms now.