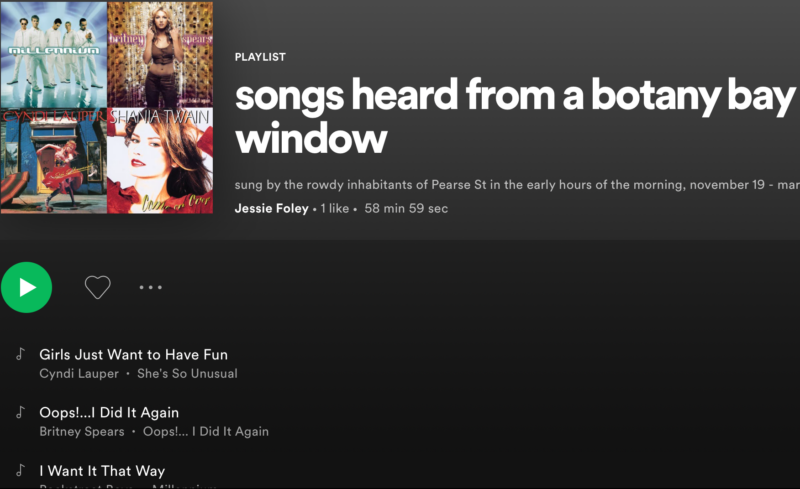 There are certain things you learn when you live for a year in a room overlooking a busy street in Dublin: the Viking Splash tour guides always extract a cheer when they hit the lights just before College Green, the women aboard hen party pedi-buses are – against all the odds – actually enjoying themselves and drunk people really, really like to sing.

I might have arrived at that last universally acknowledged truth without the benefit of my time spent living on campus. But it certainly helped to hammer it home. My room in Botany Bay overlooked Pearse St – specifically, my window opened out directly onto Doyle’s.

This meant that during the day, my living space was filled with the sounds of the Luas, Dublin buses and other ambient street noise. By night, I enjoyed the full spectrum of the human experience in the form of rowdy smoking-area conversations. This is not a complaint – I am extremely privileged to have lived on campus and I loved my time there. But it does mean that I spent the first few weeks struggling to sleep and becoming increasingly irritated with the noise of the pub-goers, who would yell and sing loudly outside my bedroom until the early hours of the morning.

I needed a way to protect my sanity. Being the kind of person who pays very particular attention when the song changes at a party, I found myself obsessively tuning in to identify the mangled songs that filtered in late at night through my paper-thin window panes. I realised that I had to find a way to make this fun for myself, and so I began to compile a playlist of every song that floated up to me courtesy of the enthusiastic inhabitants of Pearse St.

A more accurate reproduction of this experience would have each of these songs filtered through a lo-fi “x, but you’re crying in the bathroom of a party” YouTube effect. This was, unfortunately, beyond the scope of my streaming service. It would also include many, many more football chants, which are (perhaps mercifully) not on Spotify. Otherwise, this playlist is an entirely faithful documentation of every song that was shouted beneath my Botany Bay window since November. In the meantime, here are some highlights.

Is anyone surprised? This song was the only one I heard on repeat occasions. It’s never left the charts, the lyrics are easy and it’s in absolutely everyone’s range – admit it, we’ve all drunkenly belted it at some point.

“I Want It That Way” – Backstreet Boys

This was a disappointment. I couldn’t see how many men were singing this particular rendition, but they did not even attempt the classic five-part harmony. Minus points for the Pearse St Boys.

Yes, ladies, we are feeling empowered! No, ladies, please not at two in the morning I have a 9am tomorrow.

A tasteful and surprising choice over the more traditional singalong “Truth Hurts”. The woman singing this was no Melissa Jefferson but she gave it socks. Almost made up for missing the acutely sold-out Olympia show in November.

This was actually somewhat touching. Despite craning my neck out of the window I could not see who was being serenaded (but I can at least confirm there was no ukulele involved). I can only assume I was accidental witness to a marriage proposal.

They really went for it with the grunts. Props to the lads for never actually knowing when the chorus loop ended but instead resolutely continuing the refrain for a full minute-and-a-half.

“Dancing On My Own” – Robyn

Is there anything that speaks to the true spirit of “Dancing On My Own” more than a woman singing it alone at 3am, drunk, walking down an empty city street? I am here for this song in literally any format (we do not speak of Calum Scott) and am honoured to be able to continue adding it to every playlist I ever make. To my absolute favourite midnight performer, wherever you are: Robyn would be proud.

As might be guessed from this selection, I will by no means attest to the quality of this playlist – I forced myself to maintain sociological accuracy rather than editing for my own personal preference. Many of the songs here are excellent. Some are truly horrific. But they are all demonstrably, relentlessly, sing-along-able, and I thought that at the very least it was a neat encapsulation of one particular aspect of Trinity life. If nothing else, it might be a fun list to throw on for a quarantine sing-along.