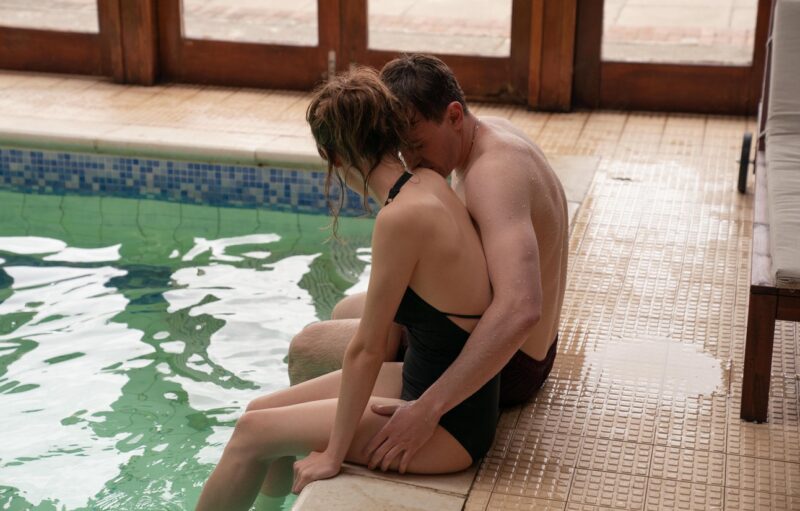 Last week, in episode four of Normal People, Connell and Marianne arrived in Trinity. In doing so, they re-entered one another’s spheres of awareness. Episode five opens with Marianne on a midnight phone call. She declares to Connell that seeing him made her realise she had missed him. She invites him back into her life.

She hears his casual “sounds good”, but doesn’t see his smile – and so she doesn’t learn of his deep relief.

Connell is next presented to Marianne’s collection of socially fluent (and aware of it) friends. His awkward handshakes don’t quite hold up. Peggy, wanting Connell to paint a portrait of Marianne at school, finds a way to turn the situation into an appraisal of herself, relishing people’s titters about how she is the kind of girl who is superficially nice but a monster deep down. Meanwhile, Mariannne and Connell, in a crowded room full of affable drinkers, are alone in their private and painful knowledge of the other’s past.

The following scene is set in Rathmines, in Blackbird bar. Pool is played and jokes are made. With Connell present, Marianne is now only partially interested in these new college friends. At every juncture, she watches for his reaction to whatever clever comeback has just been wielded. In the smoking area, finally alone with him, she asks: “Are you hating every second?”

Her big brown eyes search thoroughly in Connell’s face for his conferral of approval. “I just don’t think I understand them is all”, he tells her. When Marianne pushes him, he concedes: “I suppose they’re just a bit different from my own friends.”

If episode five was about Connell and Marianne getting back together, then episode six is a brutal depiction of outside influences working their way in

As the episode progresses the background noise of College continues to grow dimmer in the two protagonists’ ears. We cross-cut between images of Connell waiting tables and Marianne living a comparably luxurious life, showing how materially different their college experiences are.

This episode is all about how the twin tendencies of Connell and Marianne to retract from deep connections with other students inevitably lead them back to one other. Connell ignores a classmate’s attempts to get him to attend a literary society event or allow him to read his Joyce essay, for which he got the highest mark in the year.

His behaviour mirrors Marianne’s lack of interest in her boyfriend Gareth’s attempt to involve her in some backstabbing about the “tiring” politics of his society’s committee. She doesn’t care and says, bluntly: “I really need to finish this before class.” Soon she leaves him for good, in a typically to-the-point manner.

An hour later Marianne (having lost in Gareth – or, in Peggy’s words, “10 stone of boring!”) is driven to a summer party by Connell. A water bottle of straight gin adds an adolescent accessory to an otherwise sophisticated party look. At the party, Marianne’s brewing jealousy over Connell’s relations with her friend Theresa are revealed: “Do you like her more than me?” Ever diplomatic and measured (to a fault), Connell gives her half-reassurances that that isn’t the case.

Respecful sex is deferred until the following morning. In the balmy yellow light of dawn, the couple rediscover one another for the first time since school again. The camera focuses more on Marianne’s face than Connell’s, so we see from his perspective. To him, Marianne is bathed in light, and radiant. “It’s not like this with other people”, she says. He, in his careful way, gives their togetherness approval: “I know. I think we’ll be fine.”

At a summer party, Marianne’s brewing jealousy over Connell’s relations with her friend Theresa are revealed.

If episode five was about Connell and Marianne getting back together, then episode six is a brutal depiction of how outside influences work their way in. The episode opens with a shot of a shattered glass, freshly dropped by a dejected Marianne. What has happened? The narrative rewinds six weeks.

A number of scenes build the sense that Connell isn’t being open with Marianne about his unsteady sense of himself and his dependency on her. One such scene is his mother Lorraine’s phone call where she reminds Connell that it was through Marianne that he got his job.

It seems no coincidence, however, that shortly after the exchange, perhaps realising his power over her, he asks Marianne to send her a photo of herself, preferably naked. Marianne responds willingly, and with possessive playfulness, says that if he should do the same for her, she would never delete the evidence.

His room-mate is stupefied – why can’t Connell just ask to stay with Marianne for a few weeks? Connell can’t articulate why

Marianne returns home for her mother’s birthday lunch. Once the guests – in-laws from Cork – leave, Marianne’s brother Alan finds occasion to verbally abuse her, allowing his insecurities to justify squeezing a dishcloth over her hair. Her response to this bullying is obviously entwined with her relationship to Connell: in tears after the altercation, she takes the promised nude picture.

Connell’s already tentative hold on his life in Trinity is shaken when a story he writes is rejected for publication by a college magazine on the basis that it lacks “a clear voice”. His job is also set to dissipate for the summer. “What the fuck am I supposed to do, like, go looking for a job in the middle of exams?” Niall, his room-mate is stupefied – why can’t Connell just ask to stay with Marianne for a few weeks? Connell can’t articulate why.

The answer is sketched during another birthday party, this time Sophie’s. Having excelled at a round of water-polo with a group of girls, a shot lingers on Connell’s face as he emerges from beneath the pool’s surface. A panorama shows what he sees: privileged young adults lolling by the poolside. He doesn’t belong. Despite joining Marianne’s side a moment later, being physically close once again – as they have so many times been – he can’t bring himself to say how he feels, and how he’s just lost his job.

The episode ends with its opening shot of a fragile Marianne above a broken glass. The actual conversation, in which he must have said that he’ll be leaving for the summer, is left to our imagination.