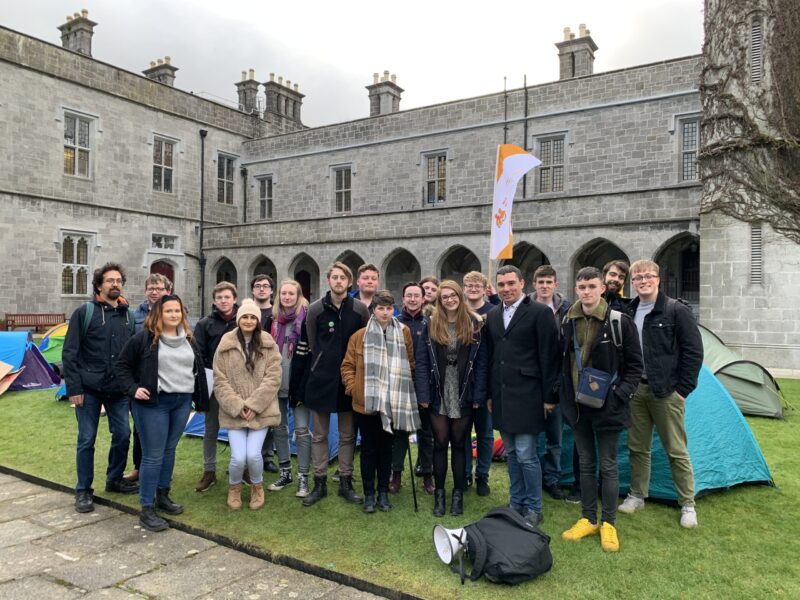 NUIG students staged a number of protests against the increase earlier this year.

NUI Galway has become the third university to reverse rent increases for next year, U-turning on a four per cent hike on its Goldcrest and Corrib Village accommodation.

Students who paid deposits in February for the complexes will be refunded the extra amount they paid while the increase was in place, and will pay existing rates for their occupancy for the rest of the year.

Dublin City University and Maynooth University have already reversed rent increases pencilled in for next year, as students and parents grapple with an uncertain financial future as a result of the coronavirus.

NUI Galway Students’ Union (NUIGSU) has welcomed the college’s decision, after campaigning earlier this semester to have the increase – one of many in Ireland’s universities – abolished.

Under rent pressure legislation, four per cent is the maximum amount that universities’ can increase their rent by.

In a press statement today, NUIGSU President Clare Austick said the union is “delighted that the University has listened to the student body and reversed their earlier decision”.

Students had camped out in NUI Galway’s quadrangle earlier in the year after the college announced the rent increases.

Austick said NUIGSU’s officers “expect to be consulted if any big decisions are made in the future. We are determined to break down the barriers to education and will continue to work with the University to create equal opportunities for all”.

Rent increases brought students out in droves earlier this year, with protests staged on campuses all over the country amid efforts by colleges to hike up the cost of accommodation.

In Trinity, a four per cent rent increase was scheduled for discussion at a meeting of Finance Committee in February, but the College removed the issue – first reported by this newspaper – from the agenda after widespread student opposition.

But students in Trinity came out nevertheless to voice their concerns over rent increases and warn College not to introduce them at a later stage.