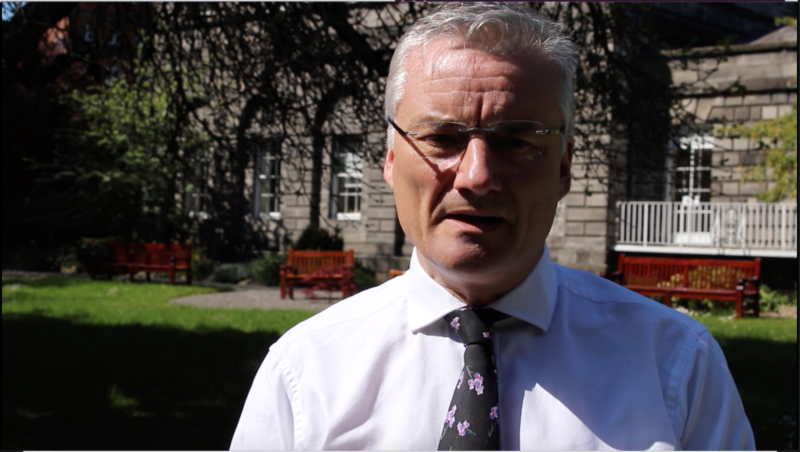 Patrick Prendergast addressed staff and students this evening in a video taken in the Provost's Garden.

Online classes are likely to continue into next year, along with a return to real-life contact “in a responsible way”, Provost Patrick Prendergast said this evening.

While large lectures will be delivered online, smaller lectures, seminars and tutorials will return to campus, Prendergast said, in a video released on Twitter tonight. Groups will, however, be moved into larger lecture theatres to allow for social distancing.

Speaking from the Provost’s Garden, Prendergast said that “for the rest of the year and likely into next year, we’ll all have to find ways of working, studying and maintaining vital social connections”.

“We will do this through maintaining the excellent online contact we have established in lockdown, while resuming real-life contact – in a responsible way.”

“It won’t be either/or”, he added. “We will still have many online meetings and talks, but we will also meet face to face.”

Prendergast also announced the cancellation of the August weekend – a weekend when Trinity hosts “black-tie banquets”, lectures and campus tours for alumni.

He said: “For alumni who are looking forward to the August weekend, traditionally this is a packed event and I’m afraid there’s no way to socially distance hundreds of people, so the Alumni Weekend cant go ahead this year.”

“And in terms of myself and my colleagues’ attendance at alumni events abroad, we’ll have to see what’s possible”, he added.

In a speech that was at times poignant, the provost said that he looked forward to talking to students and colleagues next year and walking “through our resurgent campus in the autumn, pulsating again with people and ideas”.

He also expressed sympathy for final-year students, saying: “After four years, you deserved the ‘post-Finals euphoria’: saying goodbye to your lecturers and a last long evening outside the Pav. We share your disappointment.”

He added, however, that College hoped to organise an event next year for this year’s graduates.

It is still unclear, however, when first-year students will enter Trinity.

Tom Molloy, Trinity’s director of public affairs and communications, told The University Times this afternoon that Trinity was still working through various issues caused by the new leaving certificate format and could not say when first years will start college.

Minister for Education Joe McHugh today announced the government’s decision to introduce “Calculated Grades” – which will be decided by teachers based on the previous performance of students – while also giving students the option of sitting the leaving certificate at a later date.

The government’s website says that while it “can’t be specific” about what date first-year students will start college, it will likely be in late September or early October.

Vice-Provost Jurgen Barkhoff said at College Board last month that first-year students were likely to begin at the start of November, three members of Board told The University Times.