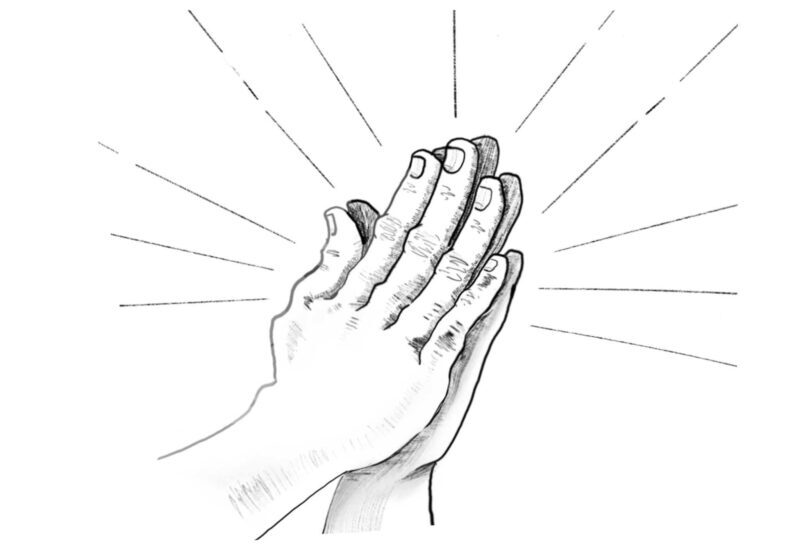 My relationship with Catholicism has always been strange. When I was younger, we went on a family holiday to the Sanctuary of Fátima, a Catholic pilgrimage site. The tour detailed the Virgin Mary’s apparition to three young children, and took place in a dimly lit basement with a heavy door that slammed behind us after we entered. I felt trapped.

I hid behind my mom’s handbag, terrified of the wax depictions of hell behind a glass screen. Afterwards, I drank bad chocolate milk and stared at the door of the hotel bedroom all night, praying that the Virgin Mary wouldn’t come to confirm my fears that I was the Messiah.

It all started at my cousin’s 11th birthday party. I was nine, but felt much younger than my cousin and his friends. When my aunt walked in with the Xtra-Vision disc of Paranormal Activity, I immediately planned my escape. I could have snuck out and asked my aunt to call my mom, but 11-year-olds are so cool, and so much meaner, and I knew that, realistically, there was no escape.

Terrified as I was, I just couldn’t turn away. Surely someone cared and was keeping count of how often I was taking a break to use the toilet, so I persevered and stared at the screen through the cracks in my nine-year-old fingers. It got into my head, every single fragment of it. I loved making Lego stop-motion animation videos – now that was ruined. I couldn’t even look at the tripod that held the camera, or it all just came flooding back.

I sometimes wonder what I’d be like if I’d never seen that movie. Perhaps cooler? More confident? I wouldn’t have missed out on six months of sleep, that’s for sure

Sitting at the kitchen table, with bags under my eyes, eating Coco Pops, I would have to turn the mirror away from me so that I couldn’t see my own reflection. The real issue came, of course, when I had to brush my teeth. I never wanted to be in the bathroom at midnight. When I’d dip my head to spit water in the basin, I would never look back up in the mirror in case I saw someone that wasn’t me.

I was never the same after that movie. I sometimes wonder what I’d be like if that never happened. Perhaps cooler? More confident? I wouldn’t have missed out on six months of sleep, that’s for sure.

This fight against my own self-torment is what sparked my investment into Catholicism. I was raised in a Catholic family and we went to mass every Sunday – even when we were on holidays. I was already an altar server and made good money at the weekends for funerals, but I wanted to make it clear to the spiritual world which side I was on.

I asked my mom if I could buy a necklace with a crucifix on it at the shop across from the church. I found a framed night-time prayer in the bottom of a wardrobe and put it on my wall. I had another crucifix over the head of my bed. I’d pray every night for a sleep without interruptions, but it rarely worked. I’d wake up in the middle of the night alone and frightened of the silence. I was terrified of every shadow.

Prayer began to mean something menacing, and the more I prayed, the worse it got. After months of unrest, I finally found that I slept better when I closed my eyes and imagined I was a Jedi or a footballer. As you can imagine, this worked much better than reciting my nightly mantra – “dear Jesus, protect me from evil and Satan”.

I realised after a long day of delivering post in the rain, alone in Newbridge, that I am very lucky to have such a good relationship with myself

All these years later, things have changed for me. I realised after a long day of delivering post in the rain, alone in Newbridge, that I am very lucky to have such a good relationship with myself. Somewhere between my cousin’s 11th birthday and now, I’ve learned to live with my own fears and insecurities, and I think that prayer in some way has helped that.

I still go to mass quite frequently with my family, and although I usually drift off and feel embarrassed when my mom asks me afterwards what I thought of the homily, I feel that a day or a moment of reflection must do some good. Admittedly, I find it more effective to reflect somewhere other than in a church, on a topic that’s not Catholicism. My friends and I decided we’d aim to implement a Sunday hike into our lives. Sometimes we walk the Sugarloaf together, and sometimes I do it alone.

I can’t quite articulate how exactly I prayed for the first time in years, on the top of that mountain, alone with no headphones on. There weren’t words of devotion and praise in my head. Although it felt abstract, I instead focused on the idea of wellness for sentient beings and prayed for the lives of people I loved. I almost felt embarrassed when I noticed that these thoughts were being directed to a god, because I hadn’t believed in one in years. But why not try? I directed my feelings towards a higher power, sat up, realised I had been sitting in sheep droppings and descended the mountain a much happier man than the one who had ascended.

Regardless of whether or not prayer has a purpose or intention, I feel it must have some effect. To pray for someone’s well-being, or upon the loss of a loved one, surely helps your mind to cope with anxieties and find peace in some shape or form. Half a life later, I’ve accepted that prayer might come back to me in this new format and maybe I have finally forgiven my younger conscience for its association of prayer with fear. Everyone has their own way of dealing with the silence in their head, and I think prayer just might be mine. Amen.