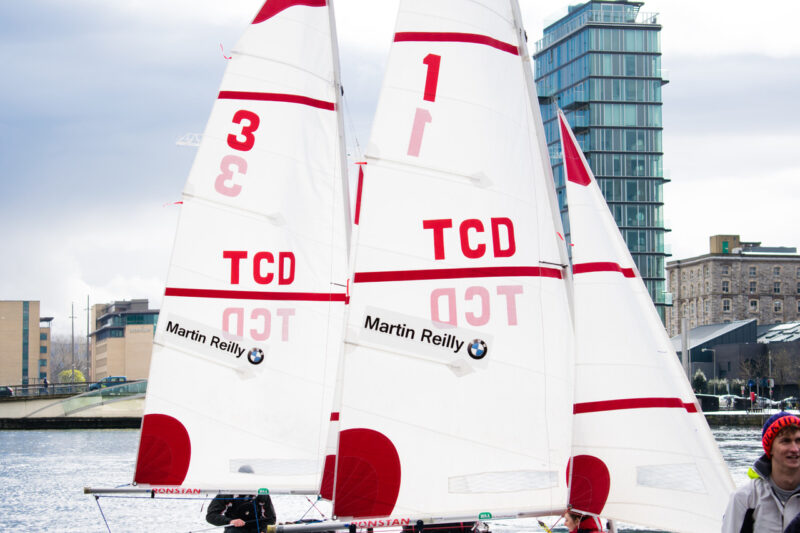 Dublin University Sailing Club (DUSC), in collaboration with university sailing clubs across the country, raised over €4,000 last weekend for two of Ireland’s charities – setting a new round-Ireland sailing record in the process.

The fundraiser involved a collective effort to beat the round-Ireland sailing record – set in 2016 by the Mod-70 trimaran Musandam-Oman Sail – of 38 hours, 37 minutes and seven seconds. To succeed, the participants had to collectively run 702 nautical miles (1303.81km) – the distance of the Round-Ireland Yacht Race – before the record time expired.

The Round-Ireland Yacht Race – held biannually since it began in 1980 – was due to take place this June, but has been postponed due to the coronavirus pandemic.

The fundraiser was successful in the challenge of beating the Mod70 Record, with the participants completing the distance in 31 hours and 37 minutes.

In an email to The University Times, DUSC Secretary Hannah Collins wrote: “Over the two days, Trinity Sailing were joined by sailors from UCD, TUD, DCU, UCC, CIT, UL, NUIG, QUB and RCSI and their family and friends to walk or run the 1,303.81 km around Ireland.”

Those who took part practiced social distancing as they did their own individual exercise while being part of a group effort to raise funds for two causes.

For Collins and the rest of DUSC, the two charities, RNLI and Jigsaw, were chosen with the intention of combining a cause directly related to themselves, as well as one more relevant for the wider college community.

In a blog post on their website, DUSC wrote: “We see these as two causes very close to our hearts, not only as sailors with a deep appreciation for the work of the RNLI year-round to keep us safe while we do what we love, but as young people who recognise the mental toll that the Covid-19 pandemic is having on people, and who want to break the all-too-common stigma that exists in the conversation surrounding mental health.”

In her email, Collins also said the club’s fundraiser exceeded its goal of raising money for the two causes last weekend: “We exceeded our fundraising target of €2,000 within the first nine hours and have doubled this clocking a phenomenal €4,000 as of this morning for Jigsaw and RNLI.”

“There were 158 participants involved in breaking the circumnavigation record, with kilometres covered by individuals all over the island of Ireland, in the UK, Gibraltar and Barbados. We are extremely grateful to everyone who got involved and made donations. We will be leaving our donation link open until the end of May if anyone still wishes to donate”, Collins added.

DUSC competed in the Irish University Sailing Association intervarsity competition over reading week, just before the coronavirus pandemic brought all sporting events to a halt.

The competition, hosted by University College Dublin (UCD) Sailing Club, was held in Killaloe, Co Clare. All three of DUSC’s sailing teams earned quarter-final positions. Their first team went on to finish third in the gold fleet, while the second team finished fourth. DUSC’s third team were runners up in the silver fleet, after being narrowly outsailed in a close final.

As a result of the coronavirus pandemic, the sailing Colours competition, scheduled to take place in April, had to be cancelled. UCD and DUSC hope that the event will take place on a rescheduled date towards the end of the summer, or at the beginning of the new academic year.

Over the last number of weeks, Trinity sailors participated in the eSailing National Championship. Virtual sailing has allowed DUSC members to compete against prospective Irish Olympians during lockdown.

As is the case for all clubs, it is uncertain how the coronavirus pandemic will impact DUSC’s upcoming season, though they have elected their committee for 2020/2021 through a virtual AGM.

DUSC were set to organise the first event of the new college sailing season this September, planned to be held somewhere in the east of Ireland, but the coronavirus pandemic has left the club bracing for the possibility that it will need to be postponed.

DUSC are celebrating their 90th year in existence this year.