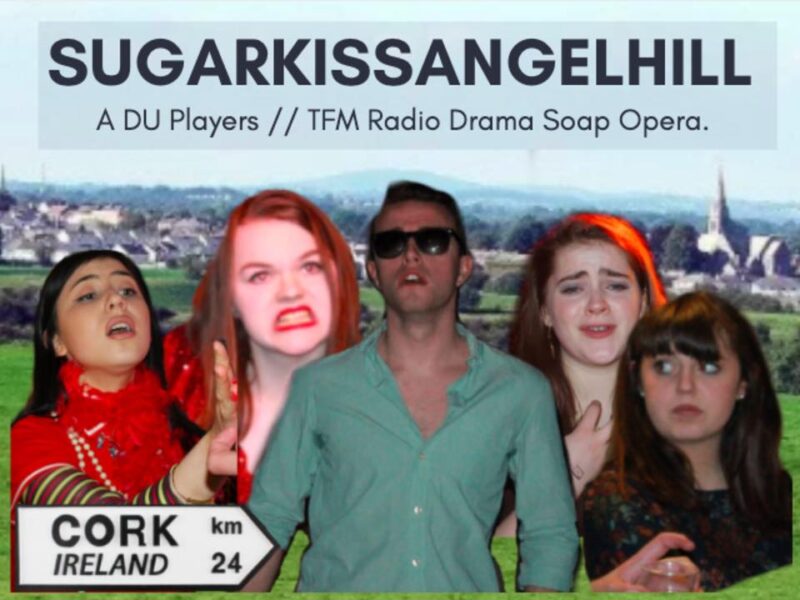 SugarKissAngel Hill, written and performed by the members of DU Players in collaboration with Trinity FM, is a radio play like no other. The show follows the Faulkners, a family who have just moved from Cork to find the long-lost son of Lorraine, the mother of the clan.

Crafted by a team of 10 writers and voiced by an ensemble cast of 24, it uses many of the tropes of a soap opera and magnifies them, satirising the fantastical storylines.

The most recent episode, titled “Fire,” opens with Lorraine Faulkner confronting local woman Peggy Marshall over the truth of her son and their past relationship. The slow burn of the conversation between the two “matriarchs” is contrasted against the fast action in a pub that catches fire in the episode. The switch back and forth between the residents trapped in the pub and the two women trapped by their past builds tension and sets the audience on edge.

Despite Lorraine’s character sometimes being oblivious, mention of particular tea bags gives her a better grasp of the situation. It’s significant that tea bags, a quintessential part of Irish life, lead to the truth – demonstrating how themes of embracing heritage and enabling progress aren’t always opposed.

A heartwarming moment takes place between Seamie Faulkner and Emily, the town’s young lovers. Up to this point, Seamie is a comic figure, frequently the butt of the joke, but here the audience sees his softer side. The dialogue reveals Seamie’s lack of confidence as he is terrified of ruining something he cares about, and Emily’s fear of never being seen as a real person due to her disability.

The two exchange a heartfelt kiss and Seamie carries Emily out of the pub, saving her from the blaze. What makes this moment even more poignant is Seamie’s death in the fire because of his desire to help others, such as Peggy’s son Francis Marshall, to escape. Seamie proves he is more than just a joke, and Lorraine loses one son in place of another, believing Francis to be her long-lost son.

Another heart-wrenching moment occurs when the town hooligans, Oisin and Fionn, discuss their future now that their mother figure Fiona is trapped in the burning pub. The brothers decide that they have to follow Fiona’s creed and look out for themselves. They flee the town but only make it as far as the local petrol station, before returning and being consoled by Lorraine, distraught after the loss of her son for the second time.

Elements of these town hooligans often felt repetitive such as their frequent listing of the circumstances that shaped their chaotic nature – moments that could have been quicker or shorter to avoid feeling stale. However, in this scene Berry Murphy and Lora Hartin really show the emotion in their voice acting. Their pain is audible as the boys once again have to leave behind their chance at family life. Here the audience sees not only the depth often missed behind the trickster figures, but also the essence of the story – SugarKissAngel Hill is, at its heart, about relationships and second chances.

It’s clear that DU Players has excelled in this new format, with an engaging story, brilliant voice acting and a premise bound to raise laughs from the first. Speaking about the online format, Ultan Pringle, the society’s chair, says the series has given structure to the week as the script is finished by Thursday, the episode recorded on Friday, and the team begin a new episode on Sunday. He also believes radio drama is the way forward with a future of social distancing and limited live theatre. He says that “the ability to have over 35 people involved each week has been brilliant for us as a society”.

While radio drama can never replace the magic of the Players Theatre, the writers and actors of SugarKissAngel Hill are certainly onto something that could be the next step for the society and could bring the energy behind this drama to a whole new audience.

The sixth and final episode of SugarKissAngelHill airs at 4pm this Friday on TrinityFM, with the entire series so far available to stream on Spotify.