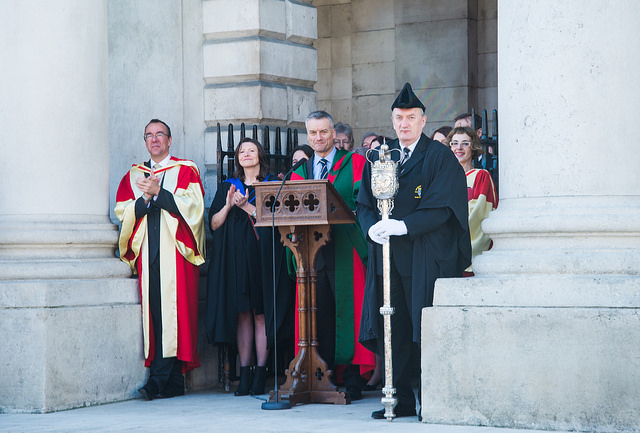 Scholars are elected every year by Provost Patrick Prendergast, and are entitled to free accommodation, as well as free fees and dining rights in Commons.
Sinéad Baker for The University Times

Provost Patrick Prendergast has said that accommodation in College “will not be denied to any Scholar” who wants it next year, but said Trinity is asking Scholars to forfeit their right to free accommodation “in the interest of the overall community”.

In a letter to the Scholars today, seen by The University Times, Prendergast wrote that “what is being asked for is the voluntary forfeiture of the privilege of free accommodation in the interest of the overall community”.

In the letter – which came after more than 160 Scholars opposed a move by the College to not allocate rooms to Dublin-based Scholars in the first round of offers – Prendergast clarified that “free accommodation in College will not be denied to any Scholar”, and admitted that doing so would contravene Trinity’s statutes.

He said he had spoken to Philip Coleman, the registrar of chambers, who he said told him that the intention behind the decision was “to ensure that college rooms are used during the pandemic by those who genuinely need them most, and clearly the needs of students from outside Dublin are greater than those who have family homes in Dublin”.

He said that “it seems to me, therefore, that what is being asked for is the voluntary forfeiture of the privilege of free accommodation in the interest of the overall community”.

On Tuesday, an email to Scholars said Trinity had decided “not to allocate rooms to students whose home address is in County Dublin in the first round this year”.

In response, 165 Scholars penned a letter to Prendergast last night, denouncing the decision and arguing it put College in conflict with its own statutes.

The letter criticised the “unfair nature” of the decision and said Scholars oppose the measures “in the interests of fairness and legality”.

“The College Statutes clearly indicate that all Scholars are entitled to campus accommodation over the course of term, and it is not within the Provost’s jurisdiction to remove such privileges”, it said.

Trinity reacted angrily to the Scholars’ letter: media relations officer Catherine O’Mahony wrote in an email to The University Times that the decision “in no way challenges the Scholars entitlements” under the statutes.

Scholars are entitled to free accommodation, as well as free fees and dining rights in Commons. Some 57 Scholars were elected this year. Provost Patrick Prendergast announced the newly elected Scholars and Fellows outside the Exam Hall as usual, in a Front Square that was nearly empty as a result of the coronavirus pandemic and closure of the College.