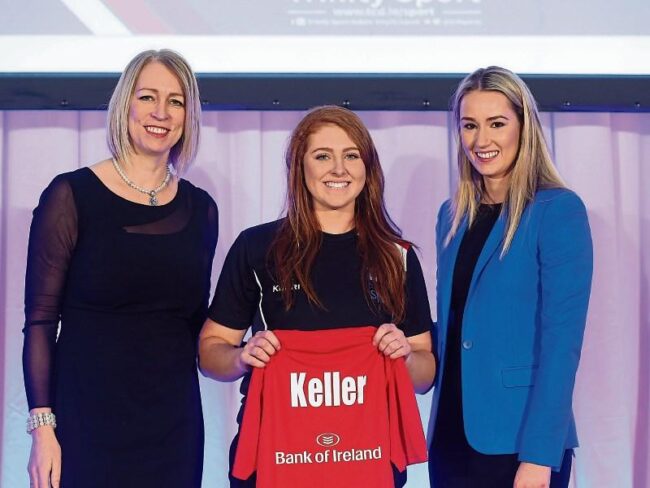 Keller was a sports scholar in College in 2017/18.
Trinity Sport

The last time I spoke with Aisling Keller, it was September 2019. She had just secured a berth for Ireland in the laser radial class at the Tokyo 2020 (now 2021) Olympic games. While she had not qualified herself for the games yet, her mood that day was buoyant and lively.

Fast forward nine months and so much has changed. Speaking The University Times about missing out on that Olympic spot, she is understandably flat.

On Thursday, Sailing Ireland announced that Annalise Murphy would be going to Tokyo after two scheduled trial regattas were cancelled due to the coronavirus pandemic. Murphy’s nomination was based on her performance in February’s World Championships in Australia, where she secured a 12th-place finish. Keller finished 63rd.

“I found out on Monday morning”, Keller says of the decision. “I got a call from the performance director. I had an inkling that this was going to happen, so I was a little bit prepared. Looking back on it now I was a little bit numb – I didn’t know what to feel. Then it was only really on Tuesday after I had slept on it I was disappointed obviously.”

Having qualified the boat, being denied the opportunity to compete for the spot is what is most frustrating for Keller: ‘Thinking about it more and more I realised that I didn’t think the decision was fair to be honest. I was disappointed with that and with Irish Sailing and the OSG [Olympic Steering Group]. I thought that they would respect myself and the other triallists enough to at least give us a fair trial. That’s my biggest issue with it.”

Murphy will be given the chance to go one better than her silver medal in Rio 2016 and, asked if Murphy’s experience and big-name draw may have swayed the decision, Keller remains gracious: “I don’t know. I can’t really say why they’ve done what they’ve done. But obviously Annalise has loads of results behind her that are world class. At the end of the day she did very well in the worlds which the decision is based off.”

“I wouldn’t like to base who they think the best sailor is off one regatta, but that’s how they’ve done it now. At the end of the day she beat me in Australia, and she beat me well. She sailed better than me there so I can’t go around saying that I’m the better sailor, and you have to send the best sailor.”

Irish Sailing’s move wasn’t in keeping with other organisations’ handling of the pandemic. Keller believes that the decision didn’t have to be made so hastily, a year out from the Olympics: “Most other Olympic sports, when coronavirus hit and competitions were cancelled, sat down and rejigged their trials and selection processes.”

“That’s what I thought would happen. I thought we’d continue the trials and have two more regattas later on in the year, or next year. The latest point, now, where you have to nominate an athlete had been pushed later. So time wasn’t against them.”

Keller resigned from Irish Sailing in April and was planning to continue the Olympic trials as an independent sailor: “I wasn’t happy with my progress and how the team dynamic was working. I wouldn’t have had any support from Irish Sailing. So I wouldn’t have had the same coach or the same team. I would have either had to find my own coach or go without a coach. Or team up with another team, which I would have probably done.”

In a statement on Thursday, Keller said of her resignation that “I wasn’t happy with my progress or how I was treated by Irish Sailing”.

Pushed on the specifics of her resignation, Keller singles out issues with coaching: “I don’t want to get into too much, but in the team I wasn’t happy with the coaching I was receiving, and that was more or less the main reason.”

While Keller could never have known how important that Regatta in Australia would be at the time, she looks back on her performance with a heavy dose of regret: “I was very, very disappointed with my performance in Australia. I felt like that at the end of the week, anything that could have gone wrong did go wrong.”

I don’t want to get into too much, but in the team I wasn’t happy with the coaching I was receiving

“There’s a whole range of conditions. I would have said that the conditions in Australia weren’t my strongest. So I was relying on the other venues to give me more of a chance. For now, I think that would be the last big event I do in a laser. So it’s disappointing that I went out on such a low.”

“I had known that this was the way the system works and have known it for years. I knew I was going to have to beat the other Irish girls in a trial. It is a little bit sickening.”

Keller will now turn her attention to finishing her physiotherapy degree in Trinity. While sailing will always be a love of hers, returning to the Olympic cycle is not something at the forefront of her mind: “I’ll always sail, but I don’t know whether I’ll do any Olympic-class sailing in the future.”

“For the moment, I’m just going to enjoy sailing, and try sailing different boats and not put myself under any pressure to perform. I just want to broaden my horizons in the sailing world.”

Keller will have to watch on as Murphy takes to the Tokyo tides next summer. As agonising as this may be, she can find some solace in knowing that she played an integral role in taking Ireland to the Olympic games.