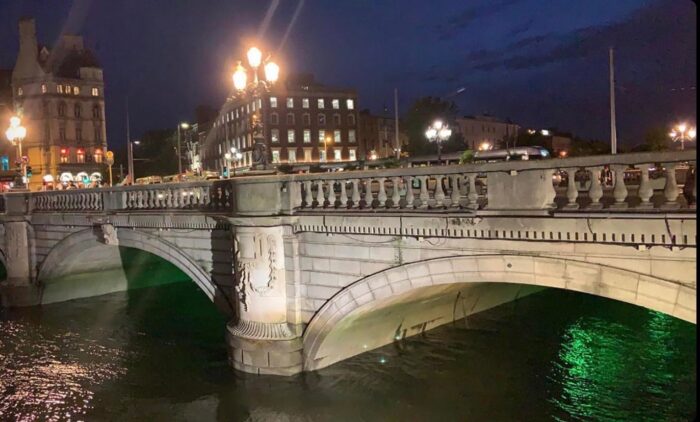 As I boarded my plane at Dublin airport on March 15th, already delayed almost two hours, the words of my country’s former commander in chief continued to echo through my mind. I had heard the quote long before I arrived in Dublin, famously uttered by former US President John F Kennedy.

They were directed at the Irish parliament, during his iconic 1963 trip that would change the course of US–Ireland relations. Kennedy had professed to have had the best four days of his life in Ireland, the same place where I had just had the best eight months of mine. In the face of a global health pandemic, though, it was hard to feel anything except sadness and fear.

My journey to Ireland did not start when I boarded the plane that would take me to Dublin in August of 2019. Far from it. It started many years ago when I first heard the catchy Irish ballad, Will You Come to the Bower, performed by Luke Kelly and the Dubliners. In the years to come, I would find ways to work Irish history and culture into my middle and high school studies. During the penultimate year of my undergraduate studies when it became clear that I would need to seek an advanced degree, I seized the opportunity to finally see the land of my ancestors.

No one was surprised when I opted to pursue a master’s degree in Trinity rather than King’s College London or the University of St Andrews. As soon as I walked through the gates of Trinity’s main campus and recognized the ironic bell tower that I had long been seeing in photographs, I knew that I was “home”.

From Paris to Luxembourg
Síofra Collins moved home to Luxembourg when the virus struck while she was in Paris on Erasmus. She had eyes for Ireland.

When word reached Ireland of the deadly new virus that had quickly made its way from China to Italy, I didn’t think much of it. I remembered my first year of high school when the infamous H1N1 virus, or “swine flu”, had broken out, and despite the initial panic, it had been contained fairly quickly. As time dragged on and what was now called coronavirus continued to spread, I was forced to gradually come to grips with the severity of what we were dealing with.

Even before the World Health Organization (WHO) labeled the outbreak an official pandemic, I knew that we were facing a crisis unprecedented in our lifetime, a notion confirmed when the entire country of Italy entered a lockdown state – the government equivalent of a “hail Mary” pass in the final moments of a sporting event.

Despite what many people were trying to convince themselves, this wasn’t “just the flu”. Medical and scientific researchers were working around the clock to try and combat this virus but until they could, all others were thrust into a sudden battle against an enemy they couldn’t see.

As reports of the dangers at hand lengthened, so did my list of assignments. My second semester promised to be more challenging than the first. As the days became weeks, I found myself torn between worrying about mastering the programs required for my Quantitative Research Methods module or worrying about staying safe from the invisible danger we all knew was coming. “When it reaches Dublin”, many students wondered, “will Trinity be shut down? Can all our modules be digitised?”.

As the course representative for my master’s program, I was fielding plenty of questions that no one seemed to have the answers to.

I’ll never forget how fast everything seemed to happen when the virus first arrived on American soil. This isn’t to say that there were no cases previously, but as with many other things, often it takes a celebrity endorsement for something to be taken seriously. On March 11th, the news broke that Tom Hanks and Rita Wilson had tested positive for the virus while on location in Australia.

Less than 24 hours later, it became even more real for Americans when it was reported that National Basketball Association star Rudy Gobert had tested positive for the virus, and that the league was responding by suspending the season indefinitely. I knew immediately that most Americans would likely start paying attention to the severity of the disease. If there are two things that Americans care about, they’re sports and entertainment. The far off threat that had started in Asia had breached the gates of my world – both at school and at home.

Even after Trinity announced that all classes would be held remotely for the time being, I found it harder to concentrate than ever. I had considerably more faith in Ireland’s government than in my own country’s, but as soon as the university confirmed we wouldn’t be needed on campus, my parents decreed that I should return home before either Ireland or the US closed their borders. I knew that this made more sense than me staying in my student living community in Dublin 8.

Nevertheless, it was with the heaviest of hearts that I agreed to leave Dublin, the city that had welcomed me like nowhere else. From the minute I first stepped off the plane, I felt it was where I belonged. As my cab slowly wove through Dublin’s technology district making its way toward the airport, I silently reassured myself that I would be back. As uncertain as I was, I couldn’t bear the thought of never seeing the city I loved again. Unlike Joyce’s Ulysses, my Dublin odyssey had not yet been completed.

It’s been months since that delayed plane landed in New York City at the airport named for the American president who also loved Ireland so well. I’ve been back at my childhood home deep in the Massachusetts countryside. As I stroll down the winding country roads nearby, I often hear the voice of Irish country music icon Big Tom McBride singing about the “four country roads” that led him on his journey.

I now know that my path is similar and one such road led me to Ireland. Unlike the musicians who inspired this journey, I wasn’t part of Dublin city in “rare auld times”, to borrow the words of Luke Kelly, but I was part of it in an era I know I will never forget. If there is a “town that I loved so well”, it will always be Dublin.