Trinity’s Scholars tonight denounced Trinity’s move to restrict places in its accommodation next year – a decision that could deny some Dublin-based Scholars a room on campus or in Halls – as well as arguing it puts College in conflict with its own statutes.

A letter from more than 160 of College’s Scholars, sent tonight to Provost Patrick Prendergast, criticises the “unfair nature” of a decision that will see Trinity prioritising accommodation applications from students outside of Dublin on the first round.

The letter – circulated to all Scholars by Felix Frank, secretary to the Scholars, and seen by The University Times – says Scholars oppose the measures “in the interests of fairness and legality”.

“The College Statutes clearly indicate that all Scholars are entitled to campus accommodation over the course of term, and it is not within the Provost’s jurisdiction to remove such privileges”, it says.

Trinity’s statutes, which are available online, state that Scholars are “entitled to reside in College free of rent for such period of no longer than nine months in each academic year”.

Up to 70 foundation scholars are part of Trinity’s body corporate, meaning the College is legally incorporated by “the Provost, Fellows, Foundation Scholars and other members of the Board”.

Responding to the letter tonight, Trinity media relations officer Catherine O’Mahony wrote in an email to The University Times that “the decision not to allocate rooms to Dublin-based Scholars in the first allocation round was taken in light of the public health crisis”.

“The decision in no way challenges the Scholars’ entitlements under the statute”, she said, adding: “The fact is that no Dublin-based Scholar will be denied rooms this year.”

“In fact as of Wednesday evening, 15 of the Scholars – every one that has written to us in the past 24 hours – have already been granted exemptions and will have rooms.” 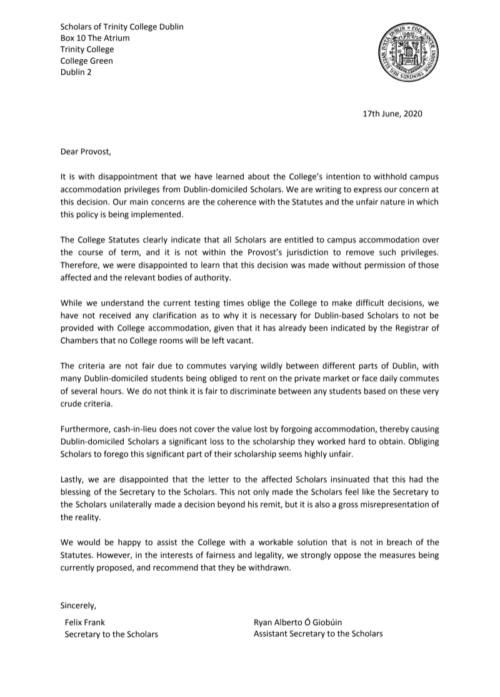 The letter was sent to Provost Patrick Prendergast this evening.

Yesterday, an email to Scholars – signed by Junior Dean and Registrar of Chambers Philip Coleman, Trinity Hall warden Roja Fazaeli and Head of Accommodation Neal Murphy – said that after “careful consideration and following discussions with the Provost and the Secretary to the Scholars, we have taken the decision not to allocate rooms to students whose home address is in County Dublin in the first round this year”.

Today, Coleman told this newspaper that Trinity will “prioritise” applications from students outside of Co Dublin when making its first-round accommodation offers, but students who initially lose out may receive an offer in later rounds.

“If a student is not offered accommodation in the first round, they may receive an offer in subsequent rounds”, he wrote in an email.

Tonight’s letter – addressed specifically to Prendergast – says Scholars “have not received any clarification as to why it is necessary for Dublin-based Scholars to not be provided with College accommodation, given that it has already been indicated by the Registrar of Chambers that no College rooms will be left vacant”.

The criteria, it says, are unfair on Dublin-based Scholars, “due to commutes varying wildly between different parts of Dublin”.

“We do not think it is fair to discriminate between any students based on these very crude criteria.”

Frank tonight told The University Times that he was only told about the decision after it had been taken, and was not consulted as part of the process.

Trinity has been grappling for weeks with the question of how best to re-open its accommodation amid ongoing social distancing regulations and fears about the spread of the virus.

Earlier this month, Prendergast told RTÉ Radio 1’s Drivetime that College is weighing up a “rotation system” next year, which could see students allowed to use shared kitchens on a rota.

He argued the pandemic “doesn’t mean much-reduced numbers” in Trinity’s accommodation next year, claiming that a rotation system for the kitchen – coupled with the ensuite nature of most of College’s accommodation – could allow “quite a number of students to be in college accommodation”.

In May, unpublished minutes seen by The University Times revealed a warning from Prendergast of the “need for students in College accommodation to do things differently by ensuring that kitchens and shared spaces are kept clean and tidy of all times”, as part of a plan to re-open Trinity’s accommodation “on a phased basis”.