The story of George Francis Fitzgerald’s ascendency is one of intangible influence, correspondence and unparalleled commitment to scientific education. His seminal work, Maxwellian electromagnetic theory, addressed an area of research that had previously been largely ignored by the scientific community. This was a fortuitous step, for him and for science.

But much of his groundbreaking work went largely unacknowledged, due in part both to the sporadic nature of his work and his indifference to accreditation. Today, little is known of his legacy.

But before getting to that part, it is perhaps best to start at the beginning.

Fitzgerald’s career embarked on the expected trajectory of the intellectual wing of the Irish Protestant elite. Born in 1851 to a privileged Protestant family, he didn’t go to school, but was tutored by Mary Ann, the sister of pioneering mathematician at University College Cork, George Boole, under what Oliver Lodge described in his obituary as “stimulating circumstances”.

He entered Trinity at the age of 16 to study mathematics and experimental science, graduating top of his class and in 1877, Fitzgerald was elected to Fellowship on his second attempt and later became the Erasmus Smith Professor of natural and experimental philosophy at Trinity.

But much of his groundbreaking work went largely unacknowledged, due in part both to the sporadic nature of his work and his indifference to accreditation

Denis Weaire, a fellow recipient of this title, has written extensively on Fitzgerald’s life and work. He tells me in an interview that Fitzgerald was “a striking figure” in the history of Trinity’s physics department. “I had a professional admiration for him but a personal one as well. I identified with him to an extent – if that doesn’t sound immodest.”

Fitzgerald’s development of the theory of electromagnetism was, perhaps, his most notable academic achievement. James Clerk Maxwell’s Treatise on Electricity and Magnetism, widely unacknowledged and difficult, was pivotal in constructing a new framework for theoretical and experimental physics, and provided a springboard for Fitzgerald’s work. So much so, he led “the Maxwellians” a group consisting of Heinrich Hertz, Oliver Lodge, Joseph Larmour and Oliver Heaviside. Together, they formed an interconnected network of scientists communicating through fastidious letter-writing and linked by their concern with electromagnetic theory.

However, Bruce J Hunt, associate professor at the University of Texas and author of The Maxwellians, insists that during his life, Fitzgerald was not celebrated extensively in the Dublin scientific community, and that even after his death, his immediate influence was limited.

“He was up apparently for consideration or possible promotion to become a senior fellow but there was apparently some doubt as to how prominent he was inside of this world,” but this is perhaps because, as Hunt points out, “he didn’t pursue credit for the work he had done”. 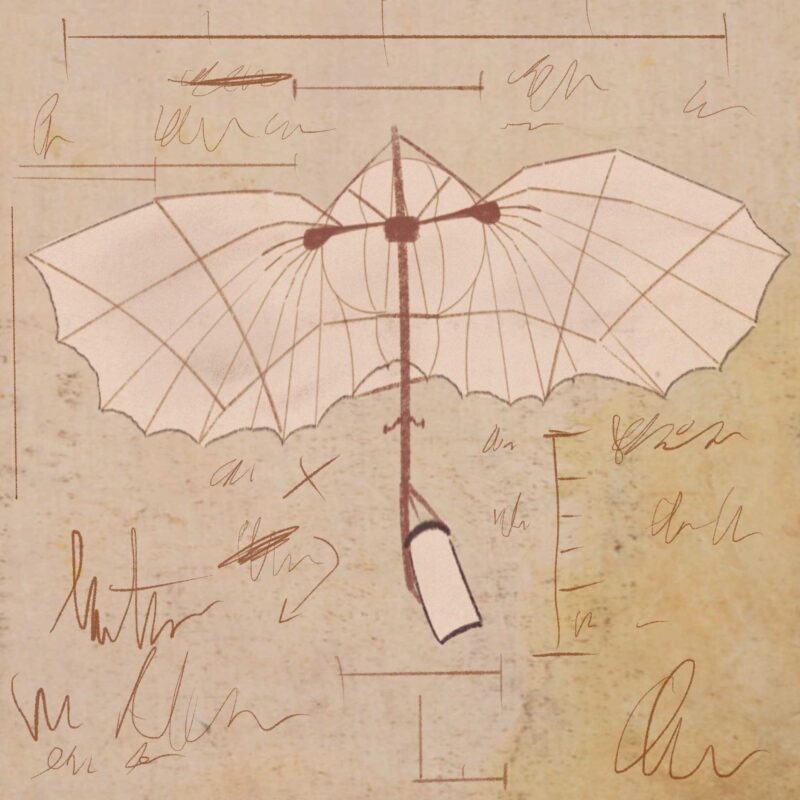 Although “very generous with his time”, Hunt explains that Fitzgerald “didn’t really publish very much and what he is known for now is largely things that were very, very short papers – an idea that had been tossed off that would later prove important. But he almost never followed up with ideas to really carry them through to completion; he let other people do that.”

The sentiment was echoed by Lodge, who “loved him as a brother”, and noted that he worked “free from petty ambition, caring nothing for himself: throwing out his ideas right and left with splendid prodigality, rejoiced if they were absorbed and utilized by others”.

This is perhaps unsurprising, given that Fitzgerald was restless and constantly seeking to delve into new areas of science, rarely persevering in any particular facet of learning to see his many theories and experiments through to completion. In fact, Fitzgerald himself was very conscious of his restlessness, which he attributed to laziness. In a letter to his fellow Maxwellian, Heaviside, in 1889, he wrote: “I rush out with all sorts of crude notions in hope that they may set others thinking and lead to some advance.”

It was in College Park then, in 1895, that his aviation abilities were tested – but he didn’t exactly get off to a flying start

Certainly, Fitzgerald’s flighty behaviour served him well for one of his more elaborate endeavours: his flying of one of the very first glider planes.

Although Irish-born Harry Ferguson is credited with being the first person in Ireland or Britain to design, build and fly his own plane in 1909, Fitzgerald, such was his deep preoccupation with aviation, was in fact the first Irishman to attempt to fly.

It was in College Park then, in 1895, that his aviation abilities were tested – but he didn’t exactly get off to a flying start. In fact, he failed spectacularly, scarcely leaving the ground with his “Icarus” glider, and was given the nickname “Flightless Fitzgerald”.

Interestingly, despite the fact that the notes of Lodge indicate that he was a man of great mechanical thinking, Fitzgerald didn’t build the aircraft himself. Instead, he bought it from Otto Lilienthal, a German pioneer of aviation who became known as the “flying man”.

Photographs from the time show Fitzgerald wearing a top hat, sporting an impressive beard, and running at high speed across College Park with the glider, surrounded by a flock of his students. The literary critic, Hugh Kenner, suggested that thirteen-year-old James Joyce may have witnessed the spectacle and that the character of Stephen Daedalus, Joyce’s literary alter ego appearing in A Portrait of the Artist as a Young Man and in Ulysses, was inspired by the sight.

Hunt notes that this seems “pretty speculative, but sounds reasonably plausible to me”, because, he says, “Fitzgerald was a well-known character around Dublin at the time and certainly his public effort to fly drew a lot of attention”. 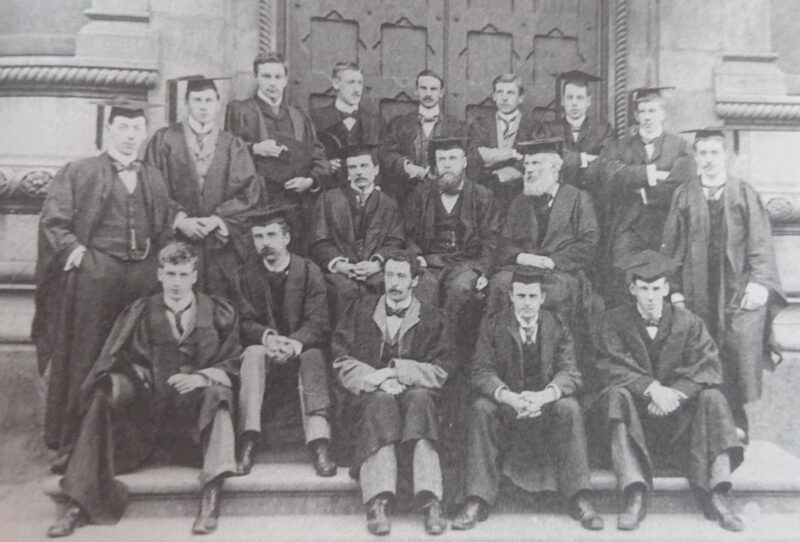 The Engineering Class of 1897 – Fitzgerald is second from the right in the second row.

But attention scarcely seemed to occupy much of Fitzgerald’s mind – even if it meant refusing to take credit for his seminal work.

In 1887, American scientists Albert Michelson and Edward Morley conducted an experiment using light waves to try to look for the motion of the earth through the ether. However, their result was inexplicable. Although it was accepted that the earth was moving, they could not detect any motion.

It was while discussing this experiment during a visit to Lodge’s house in Liverpool in 1889 that the conclusion of this experiment struck Fitzgerald. He reasoned that when something is moving, it is actually contracted along the line of motion. Fitzgerald sent his hypothesis to the obscure American Journal Science, where it appeared in May of the same year. “This is what his whole reputation among physicists is based on: this one-paragraph paper on the Fitzgerald contraction, as it’s called now,” Hunt explains. “He never even knew it was published.”

However, Dutch physicist Henrick Lorentz reached the same conclusion on the contraction hypothesis in 1892. After hearing indirectly of Fitzgerald’s work in an aberration paper of Lodge’s, Lorentz wrote to Fitzgerald, proposing to accredit him for this work. Fitzgerald replied, advising that he was unsure whether his paper had been published and that, in any case, he was happy for Lorentz to take all the credit.

Hunt notes that this was “typical” of Fitzgerald. Given the significance of his discovery however, his behaviour cannot be overstated: Fitzgerald’s research contributed to the demise of the all-pervading medium and it was this discovery which informed Einstein’s theory of relativity.

Despite a remarkable century of scientific progress, uncertainty remained about how these developments could be accommodated in Irish society and the education system. Fitzgerald’s great concern in later life was public policy in education. Weaire notes that his “diatribe” against university teaching methods and the Irish education system was radical for the time. He opposed “the authorities who were busy emancipating Catholic education at the time when he was living. He thought that was overdone.”

This is what his whole reputation among physicists is based on: this one-paragraph paper on the Fitzgerald contraction, as it’s called now

Fitzgerald was appointed to the Board of National Education in 1888 but his attempts to reinvigorate scientific education and his advocacy for financial support for applied research in Irish laboratories and universities were met with fierce opposition. According to Weaire, while on the board, he expressed his unreserved frustration with the lack of technical and practical education in Ireland, decrying in typical “diatribal” fashion: “The people are starving of bread and you have given them educational stones, and their blood cries out against you.”

Although Fitzgerald’s achievements have been largely forgotten, Trinity has nevertheless sought to commemorate him. For many years, Fitzgerald’s glider hung in the Museum Building until it was destroyed in a blaze, when a student set fire to a rope from which it was hanging. Less dramatically, Weaire’s efforts saw Trinity’s Physical Laboratory undergoing a name change to become the Fitzgerald Building, a “deserving” move, Weaire argues, because “he conceived it in order to join the international trend of having proper professional physics departments, which really didn’t really exist until the late 19th century.”

Fitzgerald died prematurely, at 49, after difficulties arose following an operation to remove an ulcer on 22th February, 1901. His legacy is one of striving for advancement – in all facets of Irish society, but especially science and education – even at the expense of personal recognition.