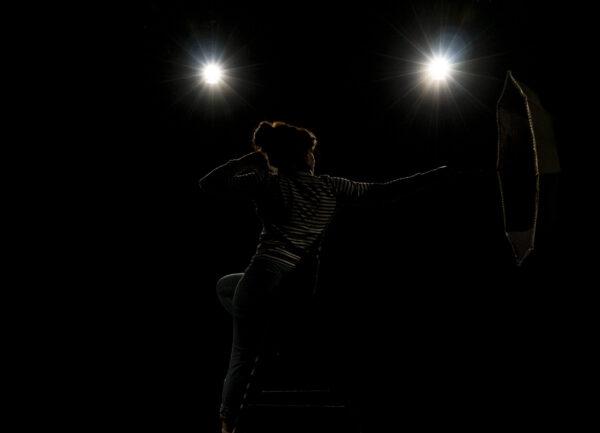 A degree course graduate picture from the Gaiety School of Acting.
Thom McDermott

The hastened easing of restrictions and recent injection of Arts Council funding has brought glimmers of hope to dark and dusty cultural venues across the country. As the fog begins to dissipate, however, let’s not overlook those still squinting at dark clouds.

For instance, what happens to the graduating theatre classes of 2020, who have stepped out into the spotlight only to find no one in place to operate it?

“I think in years to come we’ll look back at all the after-effects of the shut down that no one is considering at the moment”, says Andrea Basquille. As chair of Technological University Dublin’s (TUD) drama department, Basquille has her own graduates firmly in mind.

For final-year performance students, physically interactive modules such as “stage combat” may have been paused indefinitely, but the hardest blow has been the loss of their industry showcases. These are hallowed performance events for a theatrical debutante, where they strive to endear themselves to, and ideally secure, an agent from the sea of industry-folk in attendance.

For TUD students, the industry showcase is the culmination of a “recitals” module, which divides students into mini-theatre companies and asks them to present a selection of polished scenes from existing scripts. The best of these are brought together to form the showcase. Head of Marketing at the Gaiety School of Acting Lauren O’Toole confirms that her full-time students undergo a similar process, though their first showcase had been due to take place mere days after the lockdown on March 12th, with their industry showcase scheduled for early May. “They were right in the middle of rehearsals for it”, O’Toole recalls. “That was pretty devastating for them.”

They were right in the middle of rehearsals for it”, O’Toole recalls. “That was pretty devastating for them

Highly aware of all that graduating classes are having to sacrifice, both schools have rolled out industry-focused lecture series. In TUD’s sixth installment of its “Career Speaks” series, Gaiety graduate Claire Monelly shared a snippet of her inner monologue during her final weeks of training: “Best-case scenario you get signed by an agent, and either way you’ll just keep cracking on.”

She explained that “the leg-up that an agent can give you is they can get you into a room when no one knows who you are”. Monelly was signed at her own showcase, opening doors that eventually led her to secure the role of Fidelma on Moone Boy, among many theatrical feats.

Basquille says that of last year’s 14 TUD graduates, just three secured agents from their industry showcase, with one or two more getting signed weeks later through contacts established on the night. “It varies from year to year”, she says. “This year, with things the way they are, I don’t know if agents are going to want to take people on.”

It’s in this same spirit that the Gaiety School of Acting, working in collaboration with TUD and the Lir Academy, has re-imagined the traditional industry showcase to present “Empty Space”, an online equivalent taking place across July 13th and 14th, for the 2020 graduating classes of all three schools alongside relevant agents. Inspired by a quote from Director Peter Brooke – “I can take any empty space and call it a bare stage” – this online initiative gives graduates a platform to present their work to, and network with, a range of industry professionals and fellow graduates, while also availing of a programme of seminars, workshops and questions and answers sessions.

Best-case scenario you get signed by an agent, and either way you’ll just keep cracking on

And so, while citing the “pressure environment [of] those last few months of showcases” as necessary, O’Toole recognises that taking some emphasis away from “this one day of showcase or this one play that will break you” is ultimately healthy. For the industry, being able to see all of this year’s graduates in one place is “fantastic”. She hopes the amalgamated showcase will dissolve any lingering notions of competition between graduates of different schools and replace it with enhanced and continued collaboration.

For upcoming technical theatre graduates, similar concerns are bubbling to the surface, albeit backstage. Barry Conway, the director of technical training at the Lir Academy, says he empathises with final-year students’ anxieties over prospective employment. “Traditionally, a massive amount of our students would tend to be employed before they graduate”, Conway says, recalling that “100 per cent of [last year’s graduates] had jobs lined up before they’d finished the term”. This year, he says, as early as February 2020 “a significant number of this year’s final year had work lined up … with International Opera companies and some of the biggest names in Irish theatre”. That work has now fallen away, though.

The diversity of the technical theatre course also called for a more multifaceted response from faculty than its performance equivalent. With two Shakespeare productions – A Comedy of Errors and As You Like It – going ahead online, many technical theatre students have maintained and re-imagined their roles in these adapted processes, while others have turned to alternative virtual projects.

Stage management students have substituted “being in the room” for virtual presence, using Zoom and Google Teams software for “those key [check-in] conversations that you would normally have in a green room”, Conway says. Sound design students have adjusted their working methods to incorporate more video design elements, while costume, set construction and scenic art students respectively are concentrating less on practical delivery, such as constructing full sets, and are instead honing in on earlier parts of the process: compiling a comprehensive costume bible or “book”, interrogating model-boxes or creating sample boards to discuss with tutors lead designers.

Between the benefits of photoshop technology for prop-design and students’ innovative use of technology to collaborate on live lighting designs, learning through lockdown has taught Conway just how fruitful technology can be for the theatre sector. The universal issue affecting the industry, he says, “is time in the space. Time in the space is the most precious time and the most expensive … so whatever you can do to prepare yourself to maximise the value of that time is being sought after”.

Conway is well aware of the relative invisibility of backstage staff compared to performers when people think about theatre. He’s still optimistic, though, about the future of his trade. “Historically, every time there has been a great health crisis in the world, what has come after it is this huge celebration of life”, he explains. He places the theatre and entertainment sector at “the core of it”, and points to the fact that “many of the buildings in Broadway, New York were funded from the ticket sales that came just after the Spanish flu”.

“We expect to see an upsurge in the future”, he concludes, “but we don’t know how long the period of time between now and then is”.