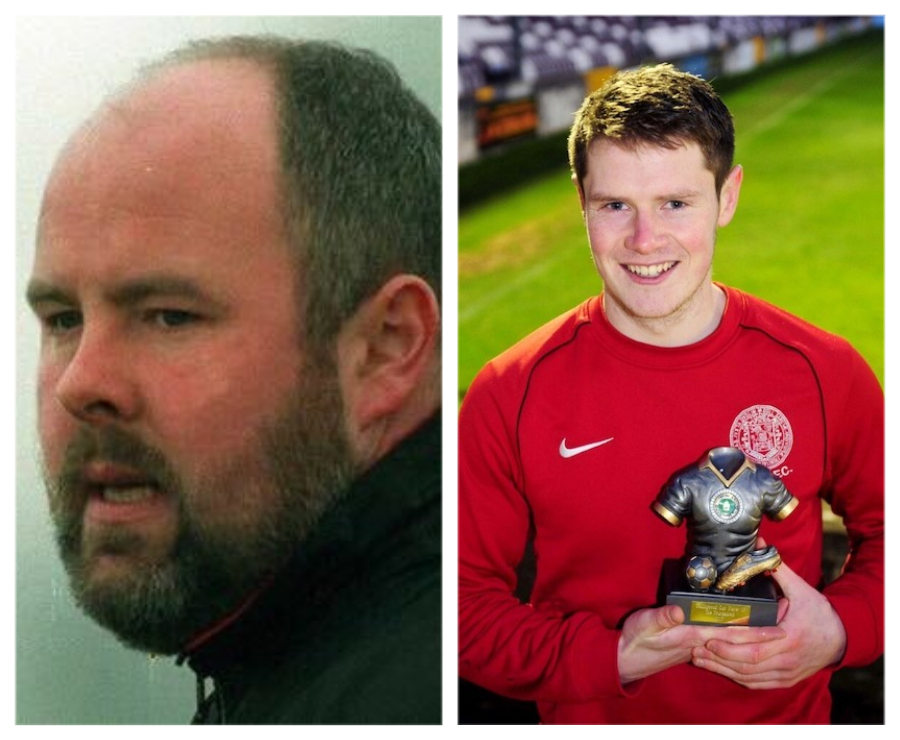 Fitzpatrick (left) brought Trinity to the cusp of Collingwood glory on two occasions. David Minihane (right), Player of the Tournament in 2015, says he brought a winning ethos to the club.

Adrian Fitzpatrick is one of the most qualified football managers in the country. Boasting a UEFA Pro Licence, the Dublin native spent two separate stints as manager of Dublin University Association Football Club (DUAFC), where he led the team to countless promotions and several superb cup runs.

Yet there was one hurdle he could never clear: a Collingwood Cup final at Eamonn Deacy Park in Galway City.

When he first came to Trinity in mid-1992, though not yet a holder of the pro licence, Fitzpatrick had an extensive CV.

We worked hard for him back then – there was no question on that. The players from back then still strongly remember Aido

When Fitzpatrick arrived in Trinity, this experience shone through, according to Ray O’Malley, a player at the time. O’Malley, who was also Fitzpatrick’s assistant coach during his second period in charge, says he immediately upped the workload of the team, focusing particularly on fitness.

“Back then we were originally training twice a week and he insisted on three times a week. Players just rolled up their sleeves and committed to the team. We had a good rapport with him.”

“We worked hard for him back then – there was no question on that. The players from back then still strongly remember Aido.”

Fitness was the backbone of the team, and was a large part of a famous win against an experienced Bohemians team to start off the 1995/1996 season, the year of Fitzpatrick’s first Collingwood final.

“I often think back to when we played Bohemians away on the first day of the season. That August was a very warm August, and I remember that day in Dalymount … with 15 or 20 minutes to go we ran Bohs off their own pitch. We were that much fitter than them”, O’Malley says.

Both Fitzpatrick and O’Malley understood the importance of this win for the team as it set the tone for what would be a spectacular season. The display in Dalymount showed Trinity what they were capable of.

With 15 or 20 minutes to go we ran Bohs off their own pitch. We were that much fitter than them

“It was a huge win for us and a massive confidence boost against a very strong Bohs side”, says Fitzpatrick. “We ended up 2-1 winners, and that set us up for a very good season in the League of Ireland B. We transferred that form into the Collingwood.”

O’Malley echoes Fitzpatrick’s logic: “Beating Bohs away from home on the first day of this season in a venue Trinity wouldn’t be expected to go and compete in, let alone win – the whole season grew from there.”

Despite the win, Fitzpatrick and Trinity weren’t given much of a chance ahead of the Collingwood Cup, especially after being drawn in the so-called “group of death”. Trinity were to face NUI Galway, Queen’s and University College Cork (UCC). Galway and Queen’s were the previous season’s finalists.

“We were the cannon fodder in the whole thing”, Fitzpatrick admits.

But Fitzpatrick and his side chose to see this as a positive thing, happy to take the tag of underdogs and go unnoticed. In 2015, Fitzpatrick took DUAFC to a Collingwood Cup final for a second time.

“On the opening day all the talk was Cork and Galway, and which one was going to knock the other one out. I was happy to let them talk about it, but deep down we were quietly confident that we would certainly have a go”, Fitzpatrick says.

Following wins against both Galway and Queen’s, a draw against UCC in front of “400 or 500 people” was enough to see Trinity top their group.

The semi-final wasn’t much of a contest, either, with Trinity confirming their status among the college elites that year with a 7-0 victory over the University of Limerick. Fitzpatrick’s charges would travel to Eamonn Deacy Park to play Jordanstown, a top-quality side, in the final.

“Jordanstown were very very strong”, Fitzpatrick tells me. “They were managed by Jim Lawler, who is now the chief scout for Manchester United, the head of recruitment … they had seven really good Irish League players.”

However, Jordanstown also had some luck on their side that tournament. Having been drawn in a three-team group as opposed to Trinity’s four-team group of death, they had played one game less than DUAFC.

He brought so much success in the College, in terms of both the club team in the Leinster Senior League as well as the university student team

Ultimately, that year, it wasn’t to be. From a throw-in that Fitzpatrick insists should have gone Trinity’s way, Jordanstown won a corner and scored a 91st-minute winner. The game finished 2-1.

Fitzpatrick would have another shot at glory with Trinity. He returned to the club in 2012 with O’Malley as his assistant manager and his UEFA Pro Licence in hand. O’Malley noticed the difference the course had made.

“There was a lot more technical input into the sessions – that was very evident on the training ground”, O’Malley recounts.

“A real high level of attention to detail, a lot of explaining and stuff – coaxing answers out of players and directing them as to what they should be doing, as opposed to barking orders at players. Not that he did bark orders at players originally!”

David Minihane, who was a goalkeeper during Fitzpatrick’s second term and eventual Player of the Tournament at the 2015 Collingwood Cup, explains what it was like as a player during that time.

He was tough at times – he really really wanted to win at all costs, so it was difficult

“It was great. He brought so much success in the College, in terms of both the club team in the Leinster Senior League as well as the university student team.”

“He was tough at times – he really really wanted to win at all costs, so it was difficult.”

“I have loads of admiration for the guy because of what he did. He really pushed everyone to the absolute limit”, he tells me.

Much like in 1996, Fitzpatrick’s team were underdogs going into the tournament – bookmakers had DUAFC as 33/1 outsiders. Despite this, Minihane tells me that the feeling around the team was good.

“From what we could see the only way was up, because we had done so well the previous couple years. I know in my first year – in the Collingwood Cup in 2013 – we didn’t do terribly well, but after that we still got promoted that year from the Leinster Senior League, so it was a plus.”

He was tough at times – he really really wanted to win at all costs, so it was difficult

Wins against RCSI and Galway in the first two rounds set up a semi-final grudge match against favourites University College Dublin (UCD). The weather was horrible. “We couldn’t have gotten a better day for it either – it was absolutely lashing, a gale of wind was blowing”, Minihane jokes.

It took a moment of magic to beat UCD that day. Then-captain Darren O’Donohoe scored a 30-yard free-kick to seal a famous 1-0 victory, and set up a Collingwood final against Cork, once again in Eamonn Deacy Park.

Almost as if history was repeating itself, Cork – much like Jordanstown 19 years prior – were on the lucky side of the draw, and had a bye into the quarter-finals, meaning they had played one less game than Trinity. Like the goal that had sealed DUAFC’s fate in 1996, Cork opened the scoring with a goal that stemmed from a refereeing mistake.

“If you ask any of our players who played in the final, they’ll tell you the first goal should have been a free out. He handled the ball in the box”, O’Malley tells me.

From there, Cork never looked back, and ran out comfortable 3-1 winners.

After the game, Minihane witnessed a side of Fitzpatrick he hadn’t seen before.

Even though it’s two runners-up medals, I still look back on them with fondness

“I kind of almost saw a different side to him when the final whistle went. Normally he wouldn’t give much away, he’d keep his personal thoughts to himself, but it definitely seemed like he opened up in the dressing room afterwards.”

“The first thing he came in and said to me personally was that he was delighted for me, and it was great for me to get the recognition for the Player of the Tournament award. You could go a year and you wouldn’t really get many compliments from Adrian, so that was nice!”

“His demeanor even after that was great, because he showed that he really believed in us and that it just wasn’t our day at the time.”

Fitzpatrick departed Trinity in acrimonious circumstances in 2016, amid frustrations over access to the College’s facilities and a lack of communication from Trinity Sport. Overall, though, he looks back on his time as coach of DUAFC – particularly when it comes to the Collingwood Cup – fondly and with few regrets.

“Even though it’s two runners-up medals, I still look back on them with fondness. They’re good memories and it was a privilege, it really was. I’m just sorry for them, that we didn’t come back with the cup either time.”