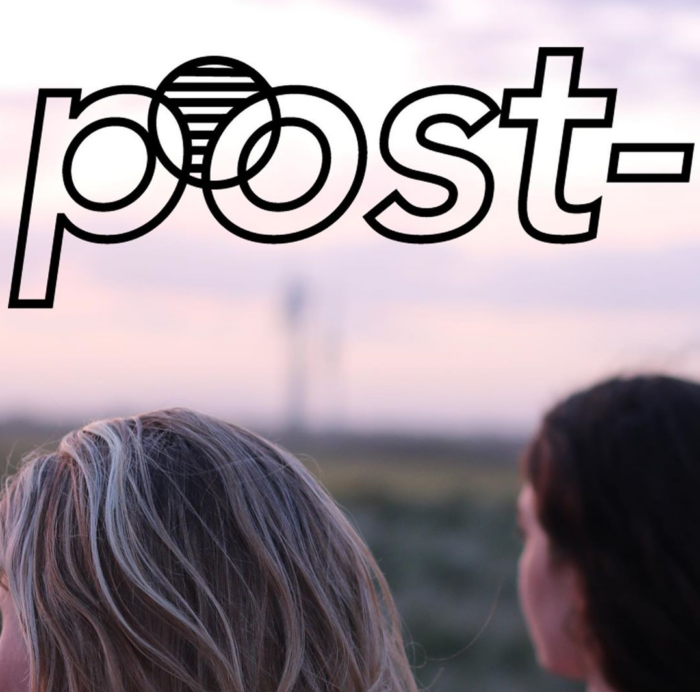 In recent months, we have all been adapting to the reality of our newly shrunken worlds. While the rhythms of regularity essentially disappeared, our perception of time and space changed entirely.

At some point during this muddle of days and weeks and months, Aoife Breen and Rachael Gunning had a revelation. They thought to themselves: “We have loads of free time.” They thought, in fact: “We have a silly amount of free time.” This revelation has no doubt reared its bulbous head in the lives of many over the last few months and is likely to have manifested as a vigorous – perhaps slightly over-ambitious – attempt to run a half-marathon. Or perhaps you find yourself a new but no less fully-fledged cinephile? Breen reiterates: “Yeah, the thing was, I lost my job and I didn’t really have anything to do.”

And so, struck by boredom’s damp hand, the pair shed the heavy veils of the mid-lockdown slump, stepped out of quarantine’s black ether and – naturally – they made a magazine. POST– is due to come out on June 30th.

As with much of the world’s recent activity, the publication will run online. But unlike much of this recent online activity, which tends to wield a “latest in lockdown” approach – why it is absolutely necessary to name your sourdough starter or 10 things I probably didn’t need to know about Paul Mescal – POST–’s central theme muses on what the world might look like in the aftermath of this unique and uncertain period. Simply put, the publication will explore the gaping, unknown territory of post-lockdown and will centre around the question: “What do you think is next?”

Breen and Gunning, the magazine’s editors, looked for a response to this question. “We wanted to ask people, in a very broad way, what do you think will change? Or do you think anything will change? Maybe you think nothing will change”. The online publication will feature works ranging from opinion pieces to video installations, from poetry and prose to digital animation. Both editors noted the diverse ways in which people interpreted the brief. “I just kind of said to people: ‘Give me your hottest take – I would love something ridiculous’”, offers Breen. “People just completely ran with it, took it in completely different directions and I think that’s great. I’m such a believer in giving people loads of freedom and getting something a bit weird out of it.”

Breen, who designed the magazine, attributes a lot of her practical skills to the time she spent working with The University Times. She was grateful to have spent the year laying out the culture section of the paper. “Being involved with Radius this year was honestly the best learning experience. In terms of real skills I will have for the rest of my life, I learned more during those print weekends than I did in the entirety of college.”

She continues: “When I started I had no idea how to use any of the programmes. You just get completely thrown into the deep end, but you learn really fast. It was a really good place to cut my teeth.” As well as the publication offering a platform for writers and artists to share their work, it has been an exciting project for Breen to develop her own design style. “I’ve taken what I learned in Radius and expanded on it and I’ve looked to do things in a different way – in my own way.”

It seems quite a daunting prospect, perhaps now more than ever, to create something and release it into the world for it to be examined by the critical eye of today’s average scroller.

Questions concerning the legitimacy, worth and purpose of art emerge frequently. Breen explains: “I found I was always asking myself: ‘Well, what legitimises writing something or making something?’ And what legitimises it ultimately is just getting people involved and putting in the time – the act of you just sitting down and doing it.”

With this sentiment, both Breen and Gunning call for support among young creatives – a hopeful reassurance during this time of vast uncertainty in the arts. “I think it’s really important to try and bring everyone with you ,and just try and give a platform to the people that you know – provide a space for them to show off all their work.”

Rachael Gunning served as art editor of The University Times this year, while Aoife Breen was creative director of Radius – the paper’s culture supplement.