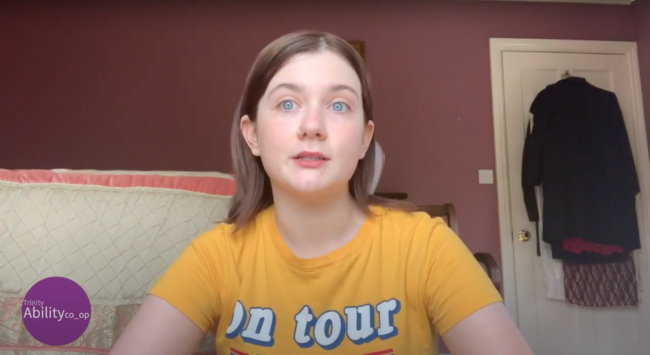 The group has released a video, produced by student filmmaker Niamh Barry, with students discussing online learning and exams.

Trinity students, alongside the Disability Service, have launched a new co-operative with the aim of introducing mandatory accessibility classes for lecturers and promoting awareness of students with disabilities on campus.

The group, called the Trinity Ability Co_Op, hopes to introduce classes that would be developed by the group alongside the Disability Service, with the aim of educating lecturers on how to deal with students with disabilities.

Members hope to ensure lectures understand College-approved accommodations for students with disabilities, and encourage them to make tutorial notes and subtitles for online lectures available.

The group was set up as part of the redesign of Trinity’s Disability Service, which involves a planned move to Printing House Square once construction is completed.

In an email statement to The University Times, Declan Treanor, the head of Trinity’s Disability Service, said: “Critical to our move to Printing House Square and our proposed name change to the Trinity disAbility Hub is the development of a shared partnership with students with disabilities.”

“Students know best and can co-produce with us in the design of services and activities”, he said.

“To be truly transformative, co-production requires a relocation of power towards students with disabilities in Trinity.”

The group will also have access to a space in Printing House Square known as the disAbility Hub.

Speaking to The University Times, Courtney McGrath, a founding member of the group who will serve as a student intern in the Disability Service this year, said that the room will be run by the group.

“If societies did want to use the room”, she said, “they would have to prove that they had accessible events before and they want to be more inclusive, because inclusivity is our top priority”.

“We will have guidelines on rules to be able to use the space”, she added.

Speaking to The University Times, Raphi Patterson, a member of the group, said: “There are loads of systemic problems in Trinity around dealing with students with disabilities.”

“So part of the work of the co_op is to educate and work with student bodies and with the university itself to get greater awareness and greater inclusion of students with disabilities.”

The group also intends on introducing an “ally award” for lecturers who engage with it, and who “are willing to have discussions and listen to students with disabilities”, according to Patterson.

The group also wants to introduce a new process in which College must consult the group before passing policy.

The process of “ability-approved policy” is to ensure that it “takes into consideration the needs of students with disabilities and is as inclusive as we can make it”, said Patterson.

The group also plans to start a podcast and produce videos highlighting difficulties that students with disabilities face.

This week, the group released a video – produced by Niamh Barry, a filmmaker and member of the group – in which students talked about their concerns surrounding the move to online learning and the effects this would have on accessibility.