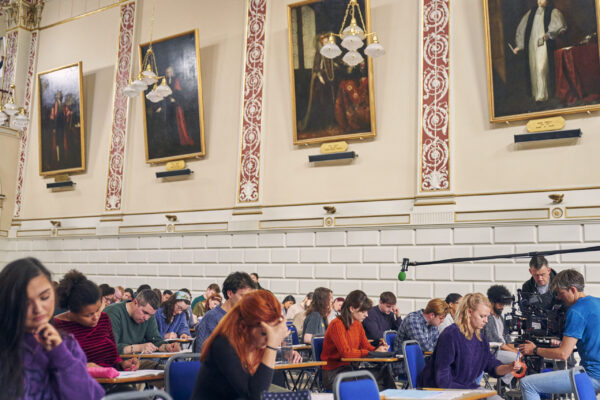 TV’s Normal People gripped audiences all over the world from the moment it premiered in April, catapulting its cast to overnight fame. Filmed in the heart of Dublin’s city centre, and on the campus we all know and love, a large cast was required to replicate the atmosphere of the busy Trinity experience.

Many of these were current Trinity students – including Shane Kenneally, a final-year English literature and history student, who worked as a background extra for three days of shooting when the show was filming on campus last July.

“I was in the Phil [the University Philosophical Society] for two years, and everyone talked about the book so much I felt as if I’d read it by osmosis”, Kenneally jokes when I ask if he enjoyed the show’s source material. He says he jumped at the opportunity to be involved – he wryly calls it a “cash grab” that helped him save for an exchange. He had done extra work in the past, and the agency running Normal People specifically sought Trinity students for the roles.

“Being an extra is a bit like being cattle”, Kenneally says. The work involves a lot of waiting around and standing in the background, or simply standing in groups and being told to walk in a certain direction. But there are positives too, he says. “You get to meet people from all walks of life. There were people who worked part time or who were full-time parents and did this on the side, and it was really nice to meet new people and chat to them.”

Paul Mescal was five feet away from me smoking a cigarette

He describes a set that was relaxed and casual, with the main actors and extras all occupying the same communal spaces. “It’s not like on a big set like Game of Thrones, where if you talk to the main actor you get fired”, Kenneally says. “Paul Mescal was five feet away from me smoking a cigarette!”

Dave Quane, a Trinity nanoscience graduate, had read the book before shooting, but admits that he “had no idea how big it was going to be”. Quane has acted in numerous college shows before but this was his first time acting on screen. “It was very business-like”, he says, joking: “It was very much like, get us in, sit there and don’t speak.” The costume process, he says, was run with military precision, with a crew that “just looked you up and down and were like: ‘No, get him a different jacket.’ It was funny but it was so weird”.

Trinity’s campus was sectioned off for filming so everyone visible in the background is an extra. “There’s scenes where you can see extras in the background coming out of a shop, turning around and going back in again and again”, Quane says, “It was really weird seeing everything in Trinity going on as normal 100 feet away while we were just on this set.”

Despite their place on the periphery of the cast, the extras still had a long day’s work: Quane recalls working a 12-hour day despite “only being in it for three seconds”.

Final-year English and drama student Ciara Berkeley was a cast member, rather than an extra: she was given lines to speak, though her character remained unnamed. Berkeley tells The University Times she read the book twice before beginning filming, adding that she “couldn’t put it down”.

It was very raw and truthful, and agonising in a way that makes it impossible to look away

Berkeley had just finished a 10-week screen-acting course, created by Normal People’s casting director, when she took on her role. Everyone who completed this class submitted a self-taped audition, which “followed on really nicely” from the course, she says.

Berkeley adds that while she had been acting in various productions for about four years, “this was my first ever TV gig, as I’d taken the course to become better equipped for acting on-screen”.

She only met Daisy Edgar-Jones very briefly, because the scenes she filmed were centered around Connell and his first few weeks in college. This, however, meant that she got to know Paul Mescal “quite well. We ended up working together on another TV show shot in Donegal later in the year”.

As a cast member, Berkely had a costume assigned to her and a costume fitting a week or so before shooting. She describes her experience filming as “really good fun”, and notes that most of the actors would be on set by 6am on a typical day. There was a “fair bit of waiting around”, she concedes, but says the time passed quickly.

Berkeley is very proud of the finished product, describing it as “absolutely stunning. It was very raw and truthful, and agonising in a way that makes it impossible to look away. I binged it in two nights!”.