Toilets and shared offices will be designated as “high-risk” zones by Trinity next year, as part of the phased return to campus life.

At a webinar yesterday focused on the return to teaching, staff heard that College’s 300 teaching spaces will all be evaluated to see how they can be used for teaching while adhering to two-metre social distancing protocols.

At the information session, chaired by Tom Molloy, Trinity’s director of public affairs and communications, staff were told that social distancing rules will apply to spaces students travel through – including corridors and libraries – as well as classrooms and lecture halls.

Staff were told that the College will seek to maximise the amount of face-to-face teaching it conducts next year despite the virus, and will attempt to maintain “the distinctiveness of the Trinity experience and the Trinity Education”.

Around 500 members of staff attended the webinar, which told staff that College’s return to work plan will prioritise the return of students and the continuation of research.

The first term of next year will start on September 28th, Provost Patrick Prendergast confirmed on Wednesday, as part of a radically altered academic calendar that will see first-term exams starting in January 2021 and a two-week Christmas break introduced.

Prendergast announced next year’s academic calendar – reported last week by The University Times – on Twitter, after a meeting of University Council this week. 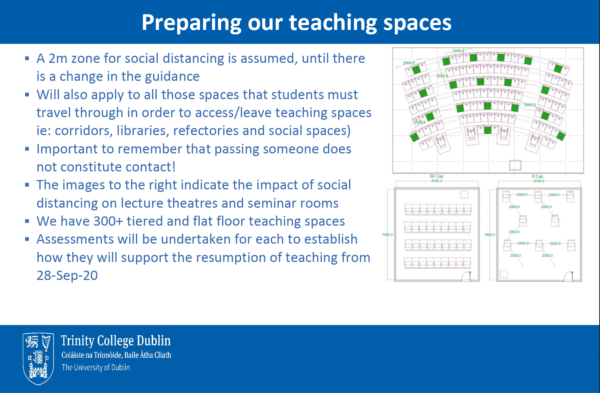 An extract from a presentation delivered to staff at a webinar yesterday.

Prendergast also said this week that Trinity is weighing up a “rotation system” in its accommodation next year, which could see students allowed to use shared kitchens on a rota in order to ensure social distancing protocols are followed.

Speaking on RTÉ Radio 1’s Drivetime, Prendergast argued the pandemic “doesn’t mean much-reduced numbers” in Trinity’s accommodation next year, claiming that a rotation system for the kitchen – coupled with the ensuite nature of most of College’s accommodation – could allow “quite a number of students to be in college accommodation”.

Last week, unpublished minutes seen by The University Times revealed a warning from Prendergast of the “need for students in College accommodation to do things differently by ensuring that kitchens and shared spaces are kept clean and tidy of all times”, as part of a plan to re-open Trinity’s accommodation “on a phased basis”.

On Drivetime, he admitted that social distancing regulations will pose challenges to students as College attempts to return to normality when it comes to teaching, with term set to start on September 28th.

But he said: “Our main objective here is to give all our students a good Trinity education – not to end up, if you like, putting the whole year online.”