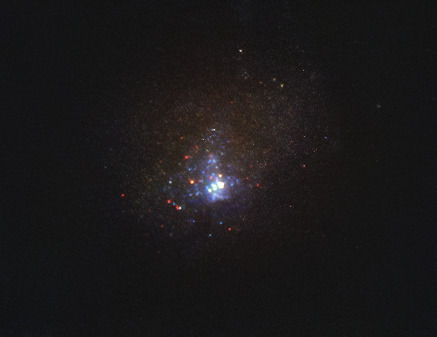 Trinity professor Jose Groh and his team have discovered the disappearance of an unstable massive star in a distant galaxy.

The absence, discovered with the European Southern Observatory’s Very Large Telescope, suggests that either the star has been partially obscured by dust and become less bright, or that it has collapsed into a black hole without producing a supernova – a highly “unusual” occurrence according to Andrew Allan, project leader and PhD student in Trinity’s School of Physics.

In a press statement, Allan, who is supported by a Provost’s PhD award, said: “If true, this would be the first direct detection of such a monster star ending its life in this manner. It would be highly unusual for such a massive star to disappear without producing a bright supernova explosion.”

The mysterious massive star is located in the Kinman dwarf galaxy and was a subject of research for astronomers between 2001 and 2011.

The Kinman dwarf galaxy is located some 75 million light-years away. From 2001 to 2011, the light from the galaxy consistently showed evidence that it hosted a ‘luminous blue variable’ star some 2.5 million times brighter than the Sun.

Allan, along with collaborators in the European Southern Observatory (ESO) and the US, have been investigating how massive stars end their lives and have focused their research on the Kinman dwarf galaxy.

In a press statement, Prof Groh, who is leading the team of astronomers, said: “We may have detected one of the most massive stars of the local Universe going gently into the night.”

“Our discovery would not have been made without using the powerful ESO 8-metre telescopes, their unique instrumentation, and the prompt access to those capabilities following the recent agreement of Ireland to join ESO as a member state in 2018.”

The team used the ESPRESSO and X-shooter instruments on the ESO’s Very Large Telescope, both finding no traces of the star.  Older data from additional instruments and telescopes indicate that the star in the Kinman dwarf galaxy could have been undergoing a strong outburst period that likely ended sometime after 2011.

Prof Groh added: “We will likely need to wait a few years before confirming what fate befell this particular star. We will observe the galaxy again with the Hubble Space Telescope next year, which will provide new clues.”

“Also, planned to begin operations in 2025, ESO’s Extremely Large Telescope will be capable of resolving stars in distant galaxies such as the Kinman dwarf galaxy, which will enable us to solve cosmic mysteries such as this one”, he concluded.