Is it outlandish to suggest that college societies have a world-changing capacity? To some, societies offer nothing more than the noble promise of free snacks and a busy social calendar during the academic year – many an idle fresher has been known to part with their final €2 coin enraptured by the lure of these simple guarantees alone.

But the influence of societies on campus – perhaps initially purchased by Doritos and wine – is far-reaching and significant. Only the green fresher can reasonably claim ignorance to it.

Societies are “uniquely placed to drive the conversation on campus” , writes Lee Cambell, chair of the Central Societies Committee (CSC), in an email to The University Times. In the wake of this summer’s Black Lives Matter protests, one must not think too little of their cache of social influence.

“There are 5,000 people that like the Players Facebook page”, says Ultan Pringle, chair of DU Players. “If we can platform a petition to get 10 or 20 extra signatures on that petition, that’s the least we can do. That’s a really easy action and it’s a really basic thing.”

But you wouldn’t have to be a cynic to query the sincerity of the black squares and hashtags that societies posted when the movement swept into the newscycle in June – the dedication of societies to anti-racism prior to this summer’s protests wouldn’t exactly yield optimism.

In March, for example, the Hist was clouted by a scandal that offered a case in point example of institutional racism at play in Trinity. In April and May, few questioned the election of predominantly all-white committees as Zoom AGMs took place.

But the influence of societies on campus – perhaps initially purchased by Doritos and wine – is far-reaching and significant. Only the green fresher can reasonably claim ignorance to it

As part of its response, TMT has designed a new human resource form to create a “pathway for people who are being made to feel uncomfortable in the society for whatever reason”, Kelly says. The group is also conscious of its show selection process this year. The society feels “a responsibility this year to tell a story and to do it properly, and to tell the right story as well”, according to Kelly.

Players is asking similar questions regarding storytelling and, as Pringle puts it, “the power of the arts”. The society will encourage the use of colour-blind casting in its members’ productions and is opening a library in September that will be used to “platform diverse voices”, according to Pringle.

Both theatrical societies are grappling with their responsibility not only producing shows, but also future theatre-makers. “So many people who left Players went out and made the Irish theatre industry”, Pringle explains. Jen Coppinger, the current head of producing at the Abbey Theatre, and Selina Cartmell, currently the director of the Gate Theatre, are both Players graduates, he points out. “If we do our job and if we are diverse and inclusive then it will have a ripple effect – it will trickle up into the industry.”

But for societies to even entertain the possibility of these far-reaching effects, they have to get to work at home and translate this summer’s spirit of change into a more concrete commitment to anti-racism on campus.

Conscious of this, Trinity Vincent de Paul (VDP) has rewritten its constitution to create a social justice sub-committee that will organise the society’s social justice activism. “They will look to speak to people in VDP and outside of VDP from marginalised communities to see what we can do in terms of our diversity and what we can do in terms of helping people in college from marginalised communities”, Alex Melvin, VDP’s public relations officer, tells me.

“Once we’re gone and our ideas are long gone, it will be written into the constitution that we need someone in charge of social structure and accessibility”, he adds. 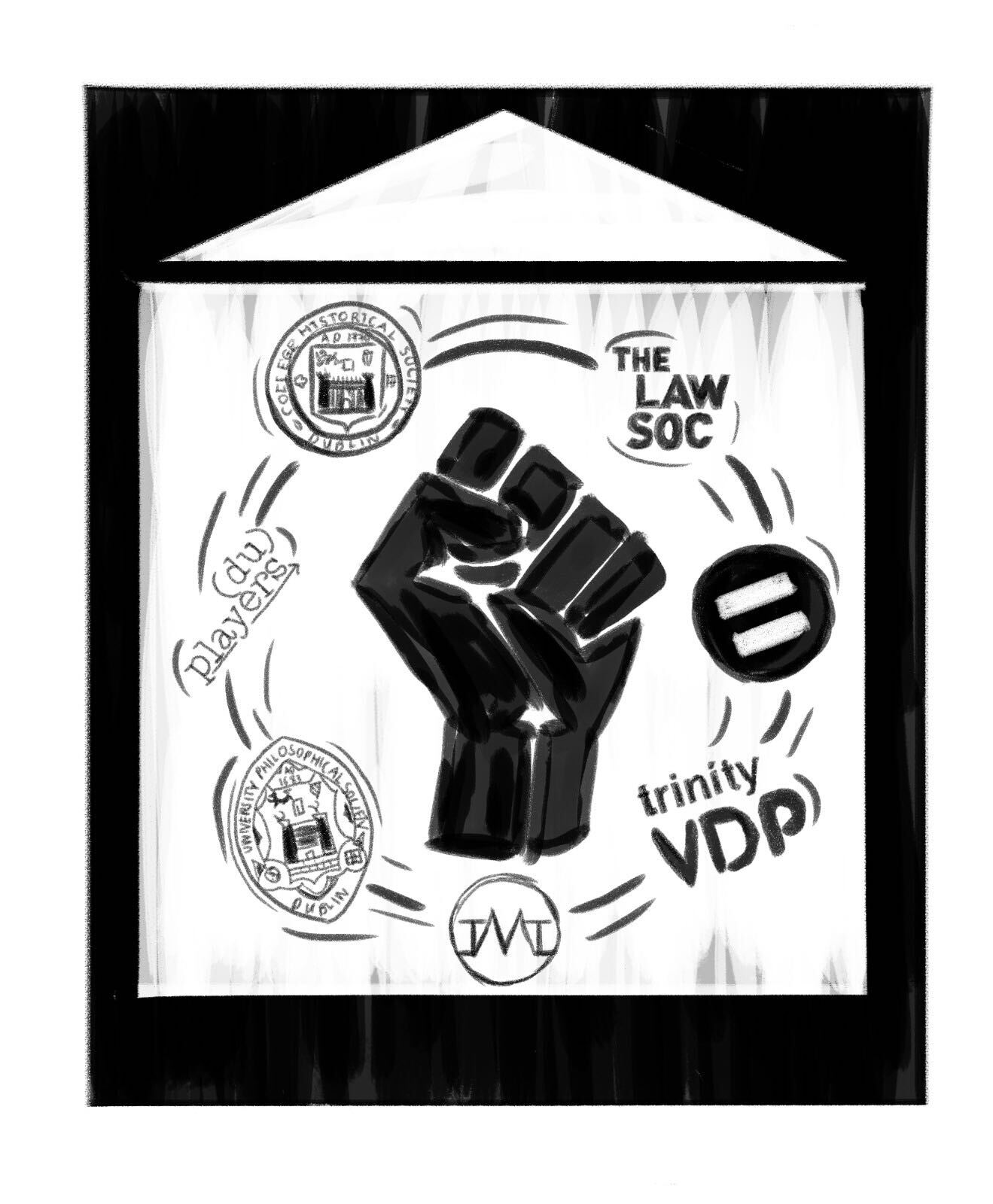 Megan Luddy for The University Times

Securing the potential longevity of this summer’s awakened sense of responsibility among societies is crucial if it is to be remembered as a watershed moment for equality on campus – especially as the changeful spirit of lockdown dissipates with the advent of eased restrictions.

For some, this will involve reforming from the inside out, but for others it will look outside for help. Jonathon Boylan, auditor of Trinity College Law Society (LawSoc), says that his society is set to launch an Access to Law programme in collaboration with the Trinity Access Programme (TAP) whose mission is “to widen access and participation at third-level of under-represented groups”.

“The plan is to have a mentorship programme whereby students who sign up will be put in contact with legal professionals and lecturers”, Boylan explains. The society will also hold a TAP day where “coronavirus-willing, the students that signed up for it could come in and take part in their own mock trial and attend the speakers events.”

Dr Cliona Hannon, director of TAP, says that the programme is eager to work with more societies to “figure out what we can do to support students from diverse backgrounds in second level”.

“One in four students in Trinity is now from an under-represented group”, she explains. “Do people know what those under-represented groups are, or mean? And how are they reflected as well in the culture of the campus in terms of accessibility and also the curriculum?” For Hannon, this “culture” starts with societies – they’re “a unique selling point of Trinity’s”, she says.

Bríd O’Donnell, auditor of the College Historical Society (the Hist), insists that this abstract “culture” is crucial to the implementation of more concrete, institutional reforms. In an email to The University Times, she writes that “the culture needs to change and become proactive about being anti-racist”.

“That culture starts with me, with the committee”, O’Donnell says. “From there, we hope it will spread.”

No doubt, all eyes will be on the debating society in the coming few months given the central position it has occupied in the discussion surrounding societies and racism this year. In March, then committee member Gabrielle Fullam put her name forward for auditorship of the Hist in order to raise awareness of racism within the society having been “frequently subject to demeaning racist remarks” during her time as events convenor.

But for societies to even entertain the possibility of these far-reaching effects, they have to get to work at home and translate this summer’s spirit of change into a more concrete commitment to anti-racism on campus

Fullam’s manifesto included an “accessibility and inclusion pledge”, which she urged incoming Hist officers to commit to. The pledge included the introduction of unconscious bias training, establishing a working group on racism comprising people of colour, and ensuring that “no strict dress-codes (such as black tie) are in force, and therefore making members uncomfortable or unable to participate”.

And in the 700-word statement that the Hist uploaded last month, the society committed to fulfilling each of these demands (although it did not explicitly reference Fullam’s campaign calls of March). In an email to The University Times O’Donnell said that the Hist “decided on these steps through outreach and discussions and there were [sic] a lot of support among our members”.

Speaking to the The University Times, Fullam says that although she is “happy and glad” to see that the Hist has heeded her calls, she points out that “it’s not just whether they do them or what they write down – it’s how it’s executed”.

“It’s good that they vowed to make change now”, she tells me, “but they haven’t been vigilant in recognising the harms that came to people of colour on their committee for the past year”.

When it comes to affecting proper, comprehensive, institutional and cultural change, “vigilance”, Fullam suggests, is everything. “The existence of things like equity policies and anti-racism groups can often be used to belittle or brush aside complaints when they arise”, she explains. “People will think ‘oh, well we have X and Y and Z so how could we have this problem?’.” Introducing these institutional changes is not a box ticked – when it comes to an issue that has been dead in the water for most of Trinity’s societies, this is just the beginning.

“How we develop as people through our time in university”, as Hannon says, “is so much determined by these social networks”. Thus, the world-changing capacity of societies need not be up for debate. How students go about fulfilling it, however, must always be.