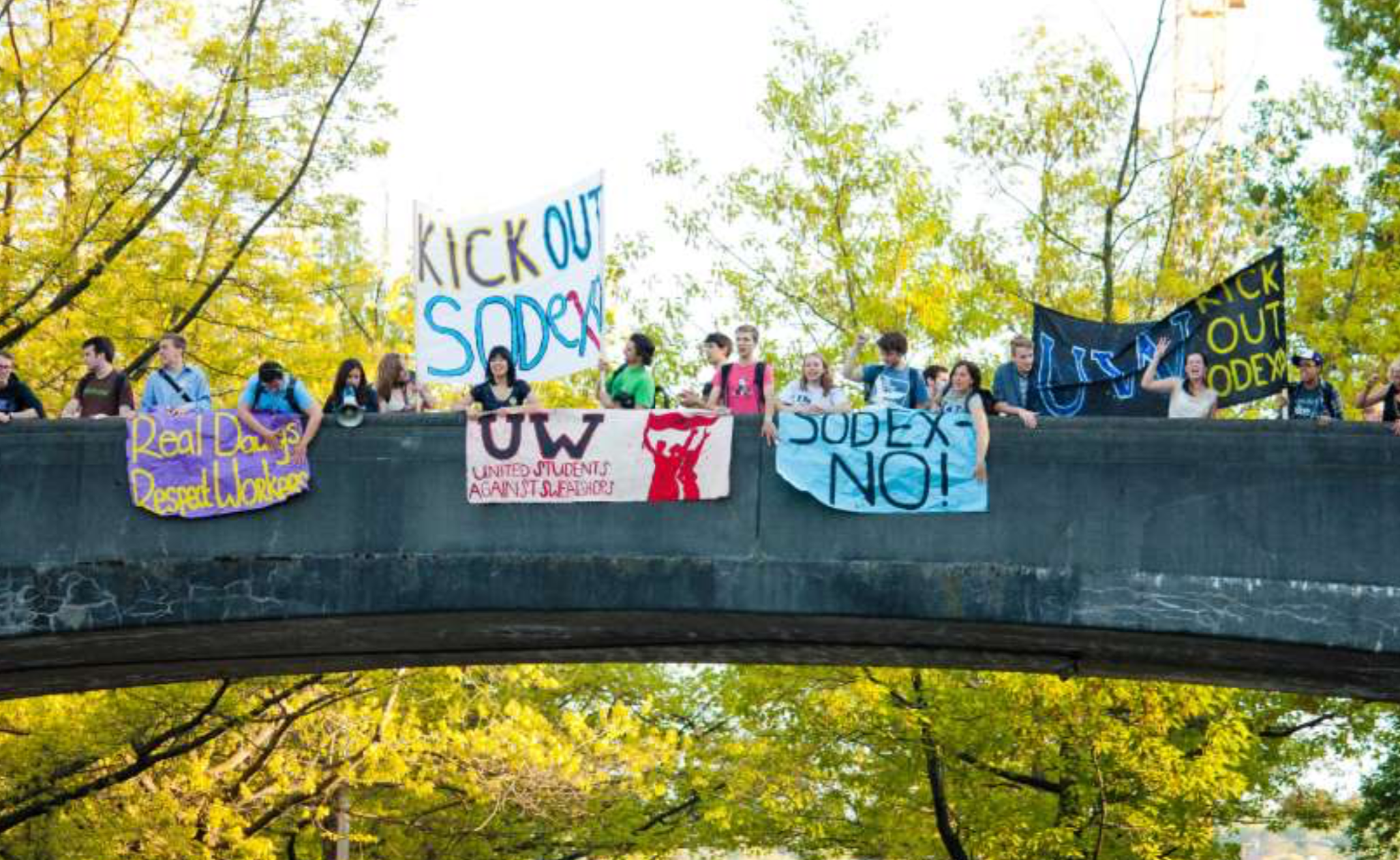 In January, Trinity students kicked Aramark out of the Hamilton. Since 2017, a group of students called Aramark Off Our Campus had protested against a cafe there, which was run by Aramark. The company is a food service provider that helps run direct provision centres around the country. In the eyes of the students, Aramark was therefore complicit in the direct provision system, and they felt that Trinity ought not to be doing business with them.

Kicking them out was a success story for activism. Students had chosen a target and hassled College enough so that keeping the company on campus was more trouble than it was worth. Simple.

But students did not ask who was running Trinity’s other restaurants. The company that ran the direct provision centres was no longer selling burritos in the Hamilton, but who was selling coffee in the Perch? Or croissants in the yet-to-be-opened Trinity Business School?

The answer is – for the most part – a massive multinational food service company called Sodexo. And while it does not run direct provision centres, its record is far from untarnished.

Almost a decade ago in the University of Washington (UW), students just like those in Aramark Off Our Campus were celebrating a similar victory. Sodexo – a company that had recently been outed as a human-rights abuser and union buster – had been kicked off their campus after 20 years of doing business with the university as its stadium’s concessions provider.

What UW didn’t know was that this fight would last for about two years, and involve sit-ins in the university president’s office, meetings with a billionaire donor called Bruce Nordstrom, countless protests big and small and a whole lot of planning

The whole ordeal started at a Huskies game – the nickname of UW’s football team. Members of what would become the Kick Out Sodexo Coalition handed out fliers and told passersby to call the UW athletic director to tell him to cut the contract at Sodexo.

It seemed like a game more than anything: students would shout down the phone at the director’s answering machine, and a handful of protesters stood about flyering. It was quaint – not enough to take down a multi-million-dollar and 20-year-old contract.

What UW didn’t know was that this fight would last for about two years, and involve sit-ins in the university president’s office, meetings with a billionaire donor called Bruce Nordstrom, countless protests big and small and a whole lot of planning.

Morgan Rose, one of the chief organisers of the protests, tells me that this slow build up was strategic.

“You have to strategically lay your cards out slowly little by little and build your case”, she says. “At 13 months, we did three consecutive building occupations where like 50 students got arrested.”

Eunice Su-sian How, another organiser, says that the group had an “escalation chart” – a curve of time versus pressure. This, along with giving members a sense of belonging, helped to drive the campaign forward.

Aramark Off Our Campus activists protesting in the Hamilton.

“I think [keeping the momentum of the campaign going ] was really good planning and also having solid leadership”, she says.

“And also the fact that [the United Students Against Sweatshops] is a very horizontal structure in terms of leadership. Really anyone can be trained to do any task and be a leader and so there is a lot of buy in that way.”

“Students really felt like they were part of the movement because we all had a role and we worked together. And also the fact that we could always recruit more students – I think that helped. Having the energy and stuff like that helped.”

Rose says that “you want to be able to say to the press: ‘We had no choice. We have exhausted every possible strategy to get the university to hear us and they have left us with no choice and that’s why we’re here. We don’t want to be here: we’d rather be in class but we can’t stop until there is justice for the workers. They’ve put us in this position.’”

The protests against Sodexo were also going on simultaneously in other universities – supported by United Students Against Sweatshops (USAS) who were also behind the UW protests.

Universities were a perfect place for USAS to target. Leo Baunach, another member of the Kick Out Sodexo coalition, says that “the university is at the top of that supply chain – even above the brands – and so has a responsibility to act responsibly and students have a responsibility to coordinate with workers that are on the ground and to jointly try to change the supply chains, change the universities, change the brands”. If students can pressure universities into changing their business relationships with companies, they can indirectly hurt the companies and force them to change their ways.

The protesters got creative. Rose says that a good campaign comes from different angles. The Kick Out Sodexo Coalition occupied buildings, handed out fliers, sent letter after letter to the administration asking them to cut the contract, organised stunts, created a map with arrows pointing to countries where Sodexo was violating human rights and brought sympathetic groups including student government under the same umbrella.

Over the course of three sit-ins over 50 students were arrested by UW police and the events were duly covered by local news outlets. The pressure continued to mount on Michael Young, the president of UW, to cut the contract, and eventually on December 14th it was decided that Sodexo would not be given the next contract for the stadium.

In an interesting twist, the UW students were glad to see Sodexo go and be replaced by Aramark: the exact opposite reaction to the students in Aramark Off Our Campus.

President Michael Young was in charge of UW when much of the protests were happening and when the contract was eventually discontinued. Initially, when I ask him for an interview, he seems happy to help – “delighted” even, according to his secretary.

The day before our interview, however, he backs out. His assistant sounds genuinely apologetic: “President Young has decided not to participate in an interview. I sincerely apologize for the inconvenience.”

Interestingly enough, however, that was not the only rejection email I received that day. A few days before – and a few days after I first organised my interview with Young – I had sent an email to Nordstrom company’s PR email address, asking for an interview with Bruce Nordstrom, a billionaire donor for UW.

Nordstrom was a central character in the protests. He had been visited on two occasions by Rose, who had made it clear that his donations would be tarnished if the contract continued. Rose tells me that targeting donors was the “last straw”. 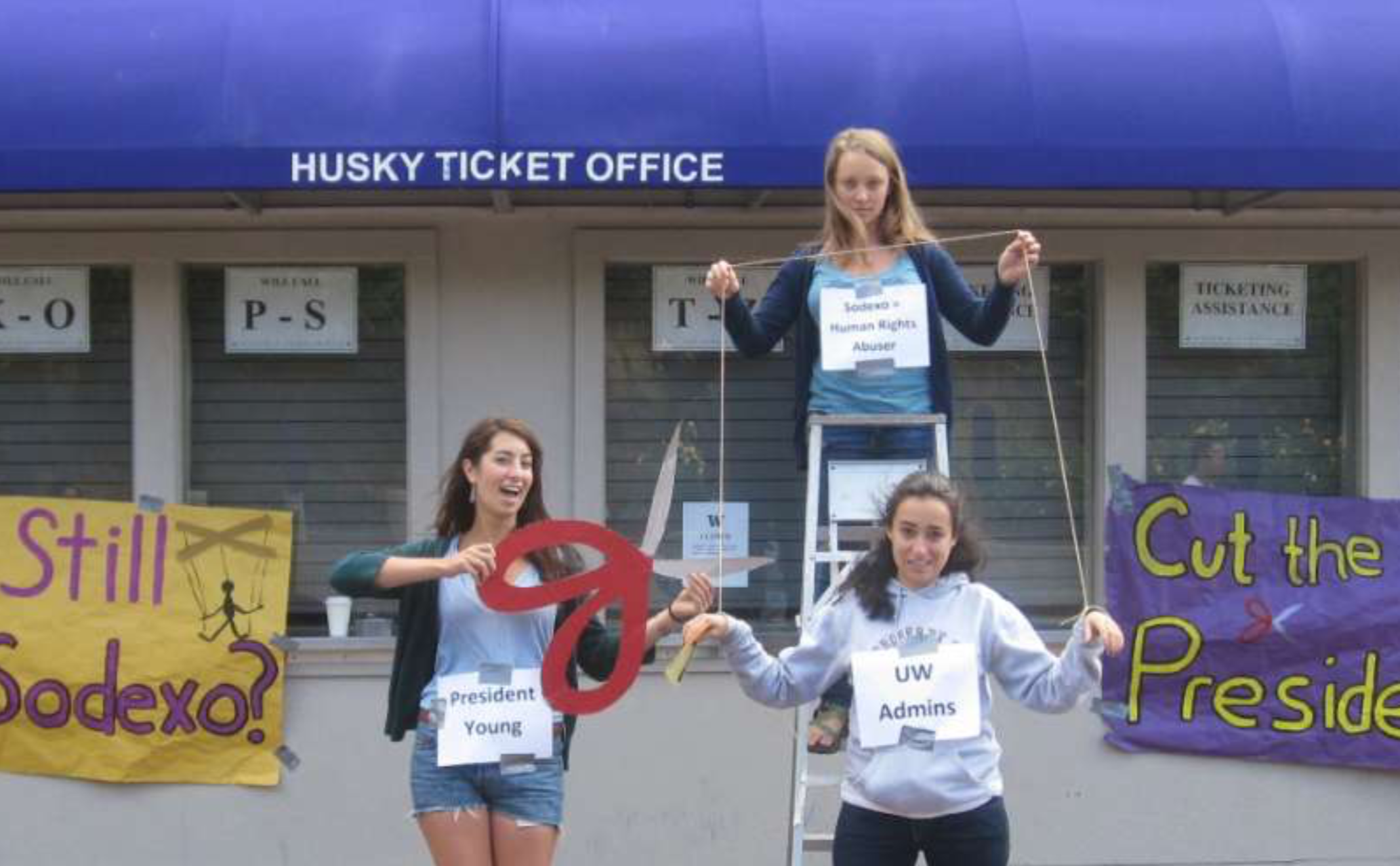 The Kick Out Sodexo Coalition demonstrates the relationship between Sodexo, the UW administration and President Young in one of their many stunts.

Two hours after I receive the email from Young’s office saying he would have to cancel the interview, the Nordstrom company send me an email back – curt and unsigned: “Thanks for reaching out. We aren’t able to accommodate an interview but appreciate you thinking of us.”

My response to the peculiar timing of Young’s abrupt U-turn and Nordstrom’s rejection of my interview request was and continues to be: “Hmm.”

But why were the students fighting Sodexo and why were they happy when Aramark took over the contract? Again and again the protesters came back to a single report as their justification: a TransAfrica Forum report which accused Sodexo of widespread labour rights violations internationally, unsafe working conditions, poverty wages and segregation.

Perhaps closest to home for those opposed to Aramark in Ireland, however, the students also used an $80 million settlement that was paid out to thousands of black employees for racial segregation and racial bias in promotions as justification.

Such concerns are probably familiar to many of the Aramark Off Our Campus activists. But it seems that Trinity kicked out Aramark and replaced it with a very similar company.

It’s our job to get them to that point where it’s like: ‘Fuck, we can’t withstand this anymore. We’re going to just meet with the workers, and recognise their union, and respect them.’ Oh my God, what a novel idea

However, Rose sees the upside to this: “It’s not about [companies] being worse or better. They all suck. They all rely on the same model of subcontracting and creating this downward spiral of wages and working conditions, and competing for who can offer the cheapest contracts by making the most cuts to their labour. So they’re all bad.”

But for the protesters it was about more than just kicking out Sodexo, she says. Firstly it was about scaring companies into doing business in a more socially responsible way: Aramark couldn’t get away with what Sodexo was doing, and the labour criteria that the activists shoved into the new contract made sure of this.

The activists also wanted to push Sodexo and similar companies into allowing workers to unionise. Rose says: “It’s our job to get them to that point where it’s like: ‘Fuck, we can’t withstand this anymore. We’re going to just meet with the workers, and recognise their union, and respect them.’ Oh my God, what a novel idea.”

But finally, the activists succeeded in building a movement. Soon after the contract with Sodexo was ended, the UW Board of Regents had a vote to decide on a proposed 33 per cent increase in student fees. The band of Sodexo protesters immediately turned their attention to this vote and forced the Board to vote the proposal down. Sodexo had started a movement.

While Sodexo is by no means a perfect company – last year in England, for example, a woman’s child died in one of Sodexo’s prisons after the mother gave birth alone in her cell unattended – perhaps this is where activists in Trinity can take solace. Sure, they replaced one dodgy company with another arguably dodgier company. But they also pushed for better corporate responsibility and showed future students that protest and activism was able to force Trinity’s hand – just as it did UW’s hand almost a decade ago.