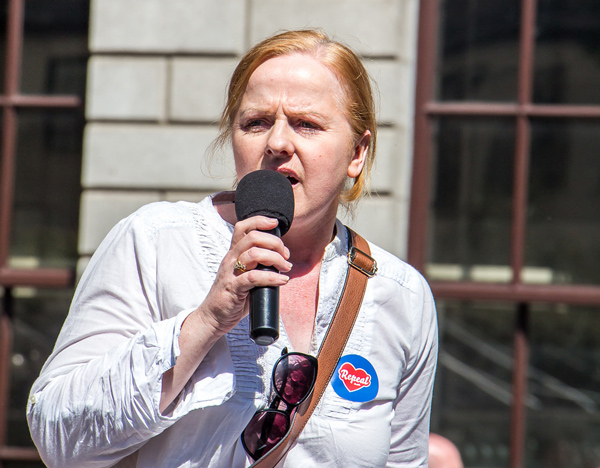 An extensive survey of third level students has revealed that almost one-third of women experienced “non-consensual penetration during their time in college”. The figure is 28 per cent for non-binary students and 10 per cent for males.

Two-thirds of students had been sexually harassed by third year of college. Shockingly, disabled students were even more likely to suffer sexual misconduct.

These and many more stark figures emerge from the biggest ever sexual experiences survey of over 6,000 students in Ireland, devised by NUI Galway’s Active* Consent Programme in partnership with USI.

The outgoing government promised – but didn’t deliver – a framework for dealing with this issue in higher education. College provides a particular opportunity and breeding ground for sexual harassment and assault, but the problem, of course, is widespread in society.

The issue of consent has raged for a number of years as a global youth and feminist revolt has challenged sexism, misogyny, homophobia and inequality. We’ve had the global phenomenon of Me Too. And in Ireland, marches following the Belfast rugby rape trial, victim-blaming in courts leading to ‘This Is Not Consent’ protests and walkouts by Google workers in Ireland and worldwide against sexual harassment.

Penetration without consent is actually rape. Let the fact sink in that almost one-third of female students are raped in college in Ireland. Surely this merits the declaration of an emergency?

The issue of consent has raged for a number of years as a global youth and feminist revolt has challenged sexism, misogyny, homophobia and inequality

Last year, then Taoiseach Leo Varadkar stated there was an “epidemic of sexual violence in Ireland”. If only then the government treated it as seriously as the current coronavirus epidemic.

The comparison may seem forced but the toll on society from gender violence is immense. Students who suffered sexual assault or harassment were more likely to experience anxiety, depression, with higher rates of non-attendance and withdrawal from studies.

Sexual and intimate partner violence debilitate victims, damage their health, their ability to work and of course their children.

My own community of Blanchardstown is reeling after the brutal murder of Jean Eagers in her home. She was a mother, a retail worker, a soon-to-be grandmother.

By coincidence, last October I held a meeting metres from Jean’s home in Hartstown to mark International Day for the Elimination of Violence Against Women. The CEO of Sonas told that meeting up to 500 women a year can’t be accommodated in the local Blanchardstown refuge. Due to lack of funds, they can’t expand their outreach services that assist women to escape controlling, abusive relationships.

Rape crisis services are similarly starved of funding. Waiting lists for counselling are the norm.

What an indictment that the cruel greyhound industry gets more state funding than the entire sexual violence sector.

One of the findings of the campus surveys was the more interaction students had with information or workshops on consent workshops, the more likely they were to know how to deal with sexual misconduct and where to seek help.

Rape crisis services are similarly starved of funding. Waiting lists for counselling are the norm

Just imagine the transformative impact in society if preventative education on sexual and gender violence was not only the norm in every college but every school, workplace and community centre. Everything in capitalist patriarchal society reinforces gender inequality and popular culture grooms girls and women in particular to tolerate a level of toxic and abusive male behaviour.

But far from educating, the outgoing government consciously blocked the passage of the Objective Sex Education Bill (moved by myself and Solidarity in 2018), despite enthusiastic support from a range of youth, student, women and LGBTQ+ organisations.

The conservative composition of the new government means there is no room for complacency that reform will automatically happen. The religious and far-right are making sex education their next battleground. Teaching sex education that focuses on consent and embraces LGBTQ+ relationships will be a challenge to the religious patronage of schools. And we all know Fianna Fáil and Fine Gael have no desire to separate church and state and have never willingly taken on the Catholic Church.

Change and social progress have always come from movements pressuring the establishment. We saw that recently in Ireland with the historic victories on marriage equality and repeal. It was the struggle of young people, women, the LGBTQ+ community and working-class people who put those changes on the agenda and carried them through. Students obviously played a key role.

It will be vital that students’ unions campaign for the promised programme for tackling sexual harassment and violence and the funding to make it a reality. But it can’t be confined to routine meetings and accepting promises from the new education ministers. This is now such an urgent issue throughout society that students could lead the way for everyone in demanding the type of funding, resources and education necessary to try to tackle it.

International Women’s Day on March 8th is a day that’s become synonymous with huge women’s strikes worldwide. The Union of Students in Ireland should consider initiating a coalition of organisations of youth, women and trade unions in the autumn, to launch a campaign for action on gender violence, building to a major national demonstration on gender violence on March 8th.

Ruth Coppinger is a former Solidarity–People Before Profit politician who served as a TD for Dublin West from 2014 to 2020.