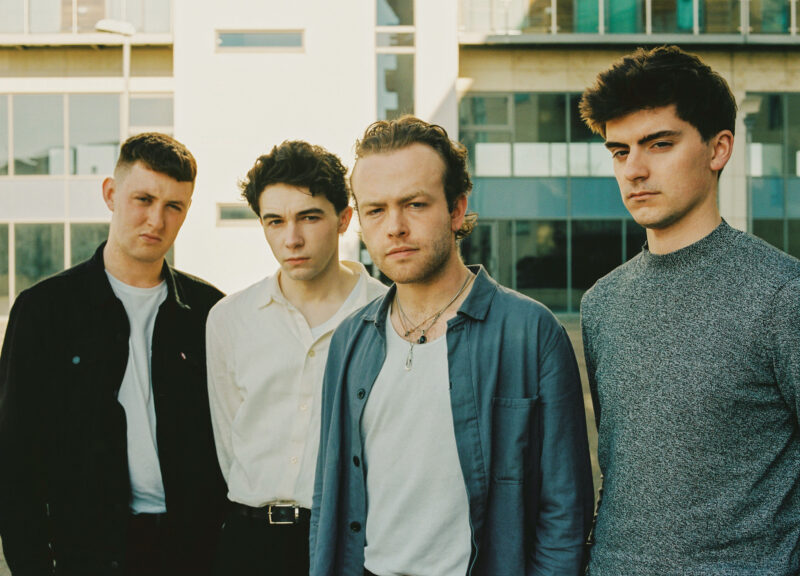 Dublin indie-pop band Milk. are reluctant to be shoe-horned into a single genre, as shown by the spectrum of musical dexterity in their releases.

This is due, in part, to the fact that the group’s initial EP was created over the span of two years, explains drummer Morgan Wilson.

“I think because the EP took so long, the songs that we went in with in the early going were more indie rock sort of cuts”, Wilson says. “Then as we all hung out together, we went a bit deeper into the other parts of our music tastes. That’s where the more instrumental and soundscape parts came in.”

Wilson joined Milk. around the same time as bassist Conor King, completing the project envisioned by vocalist Mark McKenna and guitarist Conor Gorman. The group’s signature musical dabbling can be noted on the production of “Always On Time”, which employs reverse sampling amid purposefully processed vocals, in a song that, at first, merely sounds like an acoustic ballad.

“I think that even if it’s really discreet, that spirit of trying to do something weird and pushing the boat out exists even in the most palatable of the songs. If you’re looking for it, there’s always funny production quirks in there”, says Wilson.

These outlandish components are even less subtle in “Saudade”, a two-part instrumental from 1, The EP that ranges from ambient guitar plucking to vibrant club melodies. King endorses the band’s daring decisions on their debut EP, saying “I think it was bold enough to just put it out there without alluding to it at all. If people respond to it or if they don’t that’s cool, but I think it was just something that we felt that we wanted to do”.

Wilson agrees, saying: “We wanted to show immediately that we weren’t going to shy away from putting out something left of centre.”

Despite 1, The EP being barely two months old, Milk. have already returned to the studio to work on their next release. King describes how the group are changing their approach this time around: “We’re approaching it from a really different point of view. Instead of trying to build upon stuff we already have, we’re going in with fresh ideas.”

Wilson concurs, referring to the tunnel vision that comes with entering the studio with finished songs: “If you go in with a demo that’s too complete, it’s really difficult to detach yourself from ideas in the name of putting in something cooler. You will often not want to get rid of something just because it’s been there a while, rather than based on its musical merit.”

The new release is being recorded and produced by Adam Redmond of Flaked Studios, a longstanding collaborator and friend of the band. The group are currently spending two days a week at Redmond’s home studio – an arrangement which King finds preferable to an intensive two-week recording session. “We can spend a bit of time getting certain things done. Not so much wasting time, but we can allow an hour or so to explore an avenue even if it doesn’t end up being used”, he says.

Having just released 1, The EP in June, the current state of the world has left the band itching to perform their new material, namely the hasty pop anthem “Treat Me”.

“When we played that for the first time at the Workman’s headline show, it felt really good for me and ever since, I’ve been looking forward to playing that one live – now that people have had time with it”, remarks King.

“I’ve played in a lot of noisy punk bands, and “Treat Me” is the closest to that energy in our set”, Wilson comments. “We also didn’t get to play it that much before all of this COVID stuff happened, so we had limited exposure to a really nice response from audiences, and I think that also has made us both more excited to go back to playing it.”

To quench their restlessness, Milk. recently announced their first international tour for next February. Describing their future plans, the band members are thrilled, while maintaining their pragmatic albeit optimistic exterior. “It seems so strange at the moment even talking about it, because it just doesn’t fit with the world that we’re all living in, but it’s a good long while away so we can only hope”, says Wilson.

Tickets for Milk.’s 2021 UK and European tour are available now through the band’s website. 1, The EP is available to stream on all major platforms now.