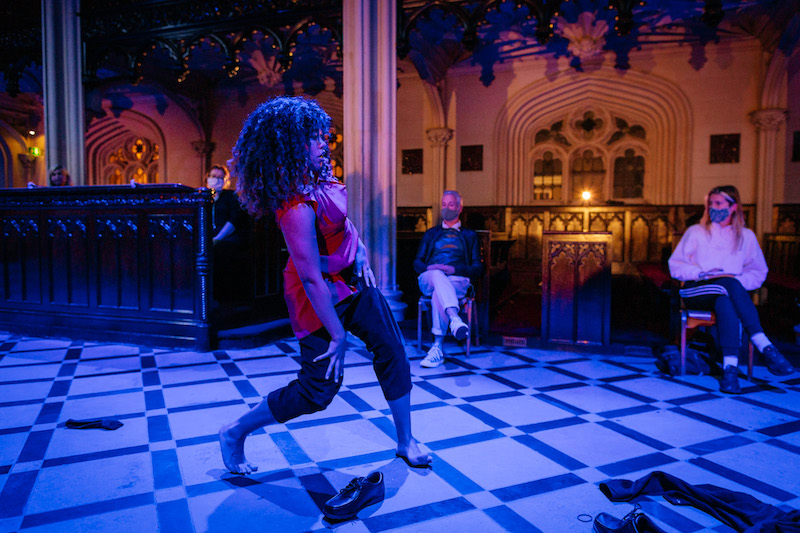 The acting in MALAPROP Theatre’s new show, Before You Say Anything, is so good that even though the actors maintain the two-metre social distance throughout, it never feels like it. The show, which is running in the Chapel Royal in Dublin Castle as part of Dublin Fringe Festival, follows three pivotal characters: a 19th century man who fears severe repercussions following an unwanted sexual encounter with another man, a 1980s black woman facing her police detective husband who is determined to kill her, and a mentally-ill woman who, when held in preventative Garda custody, has naked photos taken of her in her cell that are later shared.

The writing hits every beat with a mix of dark comedy and confrontation. This is particularly visible in an encounter between the black woman, played by Ghaliah Conroy, and a London parish priest, played by Peter Corboy, in which both characters – each unsure of the other’s intentions – are on edge. The social distance between the two actors adds to the tension as they slowly begin to build trust and understand each other’s perspectives.

Before You Say Anything also doesn’t shy away from depictions of power abuse within law enforcement and domestic settings, making it clear that vulnerable people are the ones who suffer the most. This is seen when the priest suggests that Conroy’s character call the police, only for her to respond that her husband is a policeman. Similarly, when two Gardaí turn up to the funeral of our third protagonist, the sister of the deceased, played by Maeve O’Mahony, confronts them about their lack of accountability and humanity. O’Mahony’s character cuts across the two gardaí to make her point and in doing so, shifts the power dynamics of the scene.

“In my head, there’s a universe” sang the recurring tune of the production. This song, employed at various points, speaks to the shared experience of the show’s three protagonists who have each had their trust betrayed when they needed it most. This theme, which sits at the heart of the show, is emphasised again in a monologue delivered by Peter Corboy, playing the male protagonist. His detailed monologue asks the audience to look around and decide who they would turn to for help in certain scenarios. As he dresses, the audience learns through small snippets what actually happened between the two men, and why our protagonist is running for his life.

The show’s design elements, particularly the strong colourful lighting and harmonising of the song, were at times overwhelming. Though the layering of voices plays into the themes of safety and trust, and the lighting signifies a skipping or stoppage of time, it felt like too much was happening at once – and distanced the audience from the play.

The information leaflet given to each audience member cited the writings of Dara Quigley and the events surrounding her death as the impetus behind the company’s investigation of imbalances of power and inhumanity. In the dedictation, Dylan Coburn Gray, who wrote the piece, says that “the punchline [in Quigley’s writing] was always the grotesque logic of those in power, that forced grotesque circumstances on others” and that he “admired how the analysis and the poetry [of her writing] were all bound up with one another, how her anger was never just an inarticulate shout – though it had every right to be – it was always a tool used to reveal something”.

Overall, this production served as an excellent example of what theatre can do. The writing, acting, and clever use of space came together to create an exceptional piece of theatre which commented on both historical and current issues, making the audience wonder when and where they can truly be safe.

Before You Say Anything runs in the Chapel Royal in Dublin Castle as part of Dublin Fringe Festival until September 11th.