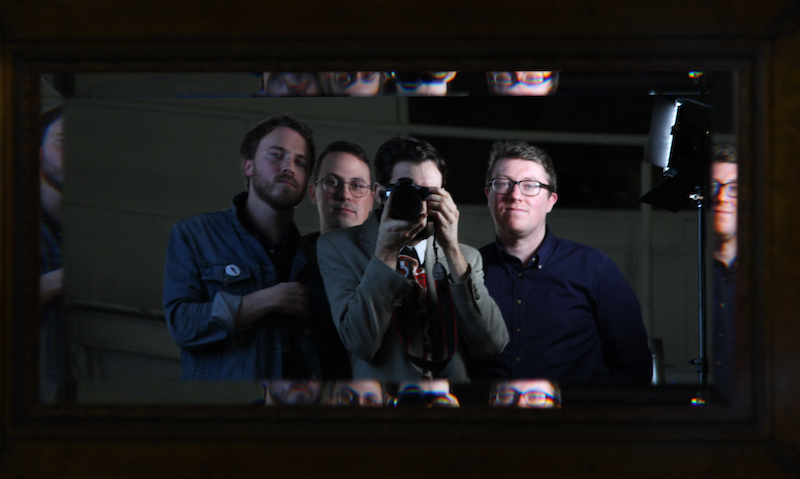 It’s February 2020 and Dublin’s postmodern indie-pop four-piece Autre Monde is gearing up to release its debut album, The Imaginary Museum. The promotional demands have started coming in and an extensive nationwide tour is planned. To top it off, the band is preparing to head to the South by Southwest Music Festival in Austin in mid-March for the first time as a collective. The band’s bassist Padraig Cooney says that by early March, “everything with the visas was sorted, flights booked and we had arranged a full week of shows”.

We all know what happened next.

“Literally, South by Southwest was called off two days before we were flying out. Once that happened it became obvious that things weren’t going to be happening”, continues Cooney.

At the onset of lockdown in March, the band found itself in the unique position of having an album out which they couldn’t physically promote. “It was very bad timing for us because we put the album out and we hadn’t had our main opportunity to sell physical records at gigs”, says Cooney. Things then continued to worsen as festivals in Ireland, the UK and on the continent were struck off.

The band seemed to get caught up like most of us, in the sudden void – a black hole of time and activity. Cooney explains: “A lot of people thought that we’d have loads of time to be creative. I found I didn’t get an idea for two months. I found it quite a sterile time.”

As the band tried to make the best of a bad situation, they were faced with the limitations of Zoom as a creative platform. “The timing doesn’t really work”, Cooney says.

Since then, things have improved considerably. “We did a song for a compilation [Litany of Failures Vol 3]. That was the most tangibly productive thing we did as a band. I did my bit at home, then sent it on, the rest of the lads did their bits and we put them together”, Cooney explains. “Since some of the restrictions have been eased, we’ve been rehearsing. We’re basically acting like a normal band now – we rehearse every week.”

In their transition back to normality, Autre Monde will hold two individual album launch gigs at The Workman’s Club on September 17th and 18th. The gigs will be socially distanced, with the capacity of the venue reduced from 300 to just 50 people. When quizzed about the tweaks the band will have to consider, Cooney jokes that “our singer Paddy tends to jump around. He’s going to have to be a more respectable musician.”

The album title, The Imaginary Museum, is inspired by Fredric Jameson’s theories of postmodernism. I ask whether the album has ironically taken on a fitting meaning in lockdown when fans could listen to it, but couldn’t truly experience it live – the way the band intended. Cooney replies, “All museums are imaginary in a very literal sense and all art is being mediated through things like this [Zoom call], people streaming gigs and whatnot – this push to virtualise all cultural experiences. I’m uncomfortable with that and probably the reason why we chose that that tongue-in-cheek title for the album, was a kind of discomfort with that accelerated commodification of everything cultural. No doubt that now it takes on some kind of extra irony.”

When I ask about the changing nature of fan engagement during lockdown, I’m almost surprised by the answer but then I feel guilty to have assumed that such evolution was possible or indeed necessary for an outfit like Autre Monde. “We keep things very simple. We just do shows, and we don’t really do any extra things”, says Cooney. “One of the things that was frustrating me was that it was seeming to become incumbent on bands that they were expected to do extra special offering, which they wouldn’t normally do. We tried not to get into that because we know what we’re good at. We’re good at making records and doing live shows, we’re not good at being always on content platforms.”

Cooney closes the interview with a profound remark that the band “wasn’t in the humour to adapt … We’re waiting for the time to do what we do best.”

Tickets for Autre Monde’s album launch gigs on September 17th and 18th at Workman’s Club are available through the venue’s website. The Imaginary Museum is available to stream on all major platforms now.