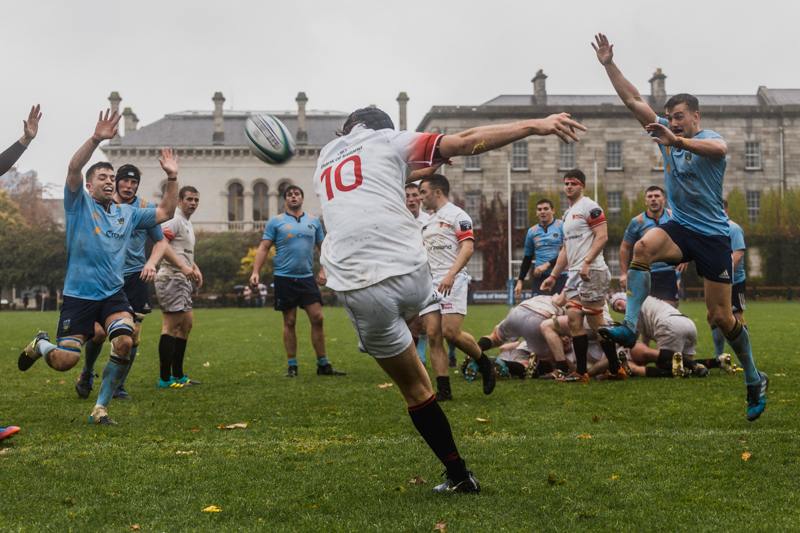 With the cup being considered an “elite” competition, the match was given the all-clear to go ahead under the recently imposed level-three restrictions in Dublin.

Following an impressive 43-26 win over Blackrock Rugby Football Club the previous weekend, DUFC were hoping to get off to a quick start in their first game at College Park this year, but it was UCD who drew first blood.

After stealing a lineout on DUFC’s 10-meter line, UCD worked it through the hands from right to left, setting up a ruck on the left touch line. From here, scrum half Richie Fahy found his half back partner Tim Corkery on a great line to burst through the DUFC defence. With only fullback Rob Russell to beat, a superb step from Corkery let him glide past Russell with ease and score under the posts. He added the extras to give UCD an early 7-0 lead.

This was as good as it got for UCD in the first half, however, and DUFC didn’t take long to strike back with a try of their own.

After 10 minutes, UCD were penalised for not rolling away and rather than take the three points on offer, DUFC elected to kick for touch. Fresher Harry Colbert found the sideline on the opposing 22.

DUFC secured their own lineout and, with a dominant maul, found themselves set up on the UCD five-metre line. They recycled the ball for a couple of phases until flanker Aaron Coleman burrowed over from close range to give DUFC their first score of the match. Rob Russell brought the scores level at 7-7.

DUFC began to control the game and found themselves camped in between the UCD 10-meter and 22-meter lines for almost 10 minutes. Unable to make much headway. When the referee penalized UCD for not rolling away, DUFC played it safe and extended their lead to 10-7 after 20 minutes with the boost from Russell.

Not two minutes later, DUFC had their second try of the contest. Following a turnover in the middle of the park, DUFC worked it wide where a brilliant offload from prop Thomas Connolly sent flanker Reuben Pim into open space on the left side of the field. Pim shifted it onto winger Liam McMahon, who was eventually brought down about 10 meters from the try line.

Having stretched the UCD defence, scrum half Louis O’Reilly elected to go down the blind side, where Colbert and Pim executed a simple two on one to send the latter in for an easy score. Russell was unable to convert the difficult kick, leaving the score at 15-7 in favour of DUFC.

Two more Russell penalties finished off a dominant half for the home side and gave them a 21-7 lead going into the break.

When the second half began, DUFC and Russell picked up where they left off. After UCD’s outside centre Andy Marks was penalised for a high tackle five minutes into the half, DUFC went quick with a tap and go.

A quick ball for O’Reilly allowed him to spin it wide. Russell collected the ball 30 meters out from the UCD posts and showed great pace to take it all the way down the left sideline for a stunning individual try. Russell kicked the difficult conversion to give DUFC a commanding 28-7 lead.

The 21-point deficit seemed to kick the UCD side into gear and they finally began to see some prolonged possession inside the DUFC half. That possession paid off after 55 minutes, with UCD scoring their first points since the opening stages of the match.

Having been awarded a penalty under the DUFC posts, UCD elected to go with the scrum. Working the ball left, a skip pass from Fahy off the back of a ruck found Ross Deegan with some space and the winger was able to muscle his way over in the corner for a well-worked try from the away side. A successful conversion brought them within two scores.

Sensing blood and looking for a comeback, UCD began to apply pressure but struggled to break down the resolute DUFC defence despite an abundance of possession. It wasn’t until the 73rd minute that the next score of the game came.

UCD fought to get inside the DUFC 22 and Fahy picked out number eight and the captain Ronan Foley, who dashed a great line to send him through for an easy try. The added conversion gave the UCD side some serious hope, but it proved too little too late as DUFC rode out the game with relative ease to secure a 28-21 victory and a spot in the final.

It was a statement victory for DUFC over rivals and current Leinster Senior Cup holders UCD who they struggled against mightily last season. The side will be hoping for a similar, high-class performance in the upcoming final with their opponents to be determined following the semi-final between Clontarf and Lansdowne Football
Club.