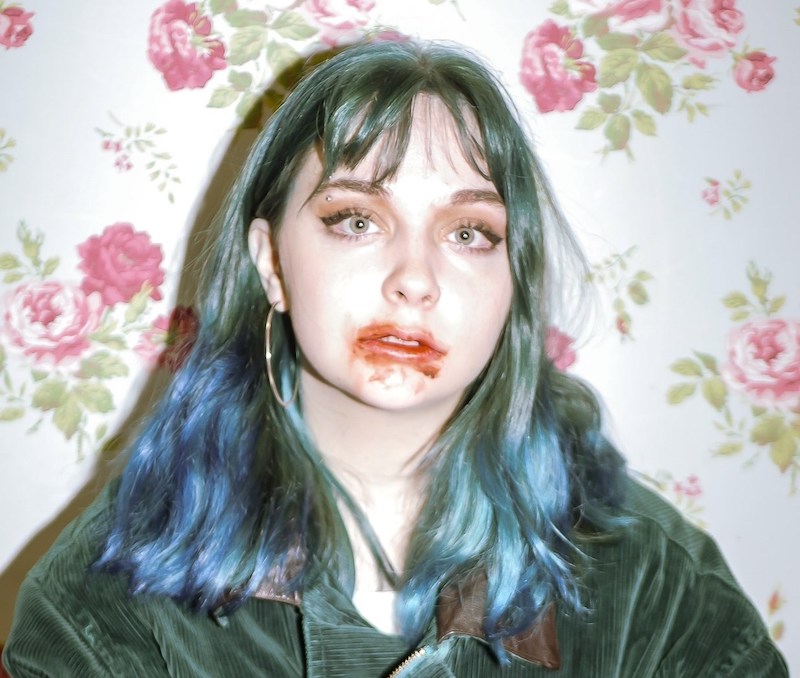 Despite her seemingly short year of music promotion and single releases, Rebecca Locke has already made a lasting impact on Dublin’s underground music scene. Whether it’s her continued efforts to make live music available to all, her lyrical balance of frailty and resilience, or even her clown makeup – her influence within the city’s indie circles is all-pervasive.

In July, Locke released her delicately industrial single “True Love” – a fan favourite at live shows, she says. Produced by Conor O’Boyle, it was a product of a taxing period of lockdown creativity. “It was a mad one to record, it was during quarantine like, proper lockdown. Whenever we got into a rut we just had to text each other nice things all like ‘we can do this!’”, she recalls.

Having discovered Locke through her zany and memetic Twitter presence, I suspect that she has tapped into a niche which may soon become the future of music promotion. Though she has reclaimed the ukulele from a product of millennial twee and transformed it into a conduit of adolescent power, her image as a product of Gen Z was unintentional. “I tried to do a PR plan for my first single and there were more structured posts, and that did get some success”, Locke explains. “Then when I made my Twitter account over quarantine I wasn’t even like ‘I’m gonna tweet funny stuff in order to get followers’, I was just going to put what I thought was funny onto it. I think that’s why my second single got so popular. I feel like people got to see me authentically.”

With her “cool and sexy clown” brand, Locke captures the basis of our generational self-deprecation with its roots in vulnerability and camaraderie. What simply began as an in-joke between her best friends, including her producer and bandmates, soon became part of her promotion. “The Rebecca Locke Clown Hour” was live-streamed to promote her most recent single.

Locke confesses that, unintentionally, she “kinda fell in love with it” – the clown brand, that is. “Like it would make me feel pretty. It’s weird. It’s not voyeuristic but it’s the opposite where you feel very seen. It’s very pleasing to the soul to be like: you can’t make fun of me, I’m already a fucking clown!”

This kind of candid self-awareness is integral to the independent spirit, which is something that Locke values in her curation of the Indigo Sessions. The sessions were established in 2019 as a free live music showcase in Workman’s Club, featuring artists such as Tebi Rex, Toy Girl, and Local Boy. They began purely by chance following a cancelled booking, but have since grown into a donation-fuelled passion project that celebrates the diversity of the Dublin underground. The Indigo Sessions are living proof that the independent scene thrives on the ethos of self-organisation and self-efficiency, while also “creating a space where art can exist without having to pay, which is becoming rarer and rarer these days”, Locke outlines.

Not only is Locke demolishing financial barriers in these spaces, but also elitism: “I feel like because you don’t have to pay you’re going to be a little bit more relaxed coming in. People always tell me that it’s a very relaxed and welcoming environment where you can go up and talk to anyone and they’d be nice to you because there’s no barriers there.”

The Indigo Sessions also showcase artists of varying followings and backgrounds, which is reminiscent of Locke’s own early days performing at open mic nights. The latest Indigo Sessions sold out within minutes, with its limited capacity resulting in an online livestream. This is yet another example of Locke’s tenacious devotion to accessibility in the Dublin music scene through all methods and mediums possible.

The theme of strength through vulnerability pervades Locke’s work, both sonically and creatively: “I actually took a clown course about four years ago, the entire ethos of it wasn’t about dancing around in makeup but it was about, like, going on stage and being your most vulnerable self. Making people feel comfortable so they can laugh with you and not at you.”

Locke’s single “True Love” is available to stream on all major platforms now.