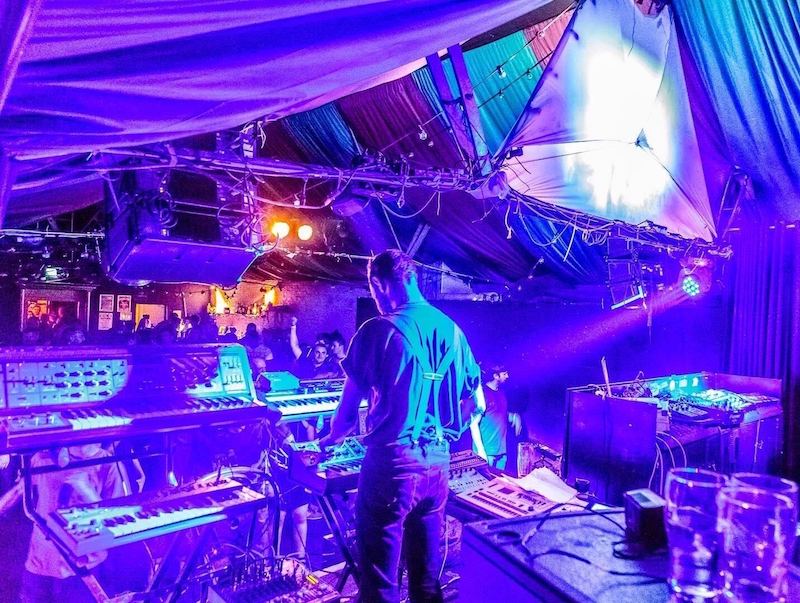 Jonny Dillon, who performs under the alias of Automatic Tasty, has been one of Ireland’s most prolific producers of electronic music over the last 10 years. Raised on the works of Jimi Hendrix, Pink Floyd and Crosby, Stills & Nash, Dillon first began experimenting with music with the guitar. “I used to sit in my room playing along to my favourite records, essentially getting guitar lessons from those heads, and I developed a good ear for melody doing so.”

Despite his mates being drawn towards artists that were coming out of the Detroit techno scene, electronic music held no instant attraction for Dillon. “I could never tap into it emotionally. I just didn’t understand what it was I supposed to be getting from this mechanical repetitive music.”

It was his introduction to The Railway Raver’s 1998 release “Drop Acid Not Bombs” – by his friend who could often be found “hauling a generator up to Glen of the Downs for organised raves” – that changed this. “That record blew my mind. That was the first time I felt this colourful landscape to the music. There was humour to it as well as a lot of sincerity, while remaining completely instrumental.” This led Dillon to drop the guitar for years, in favour of experimenting with synths. “That gave me another outlet, another avenue to explore music”, he recalls.

“A lot of it arrived almost fully formed. It’s as though you’re receiving a transmission and you just write it down. It’s rare, but it happens sometimes with creative stuff.”

Fast forward to July 23rd of this year and the release of his latest album A Farewell to Reason, on the label Wrong Island Communications. This project began in April 2015 with the song “Ballad for a Modern Man” – a track which introduced a new element into Dillon’s musical capabilities. “That was the first piece of music that I’d ever written that had lyrics in it”, he states. This was not something Dillon had ever intended to do, yet certain aspects of his life and thought processes at the time led him to picking up the pen: “I was going through a rough enough patch and sometimes that can be beneficial for creativity and art.” The song has a cheerful, almost bouncy energy to it, while the lyrics tackle societal issues within the life and mind of a modern individual. “I suppose I was navigating questions of modernity and the loneliness of modernity”, Dillon remarks.

While those lyrics were formed through quite an analytical writing approach, this was not the case for all the tracks on the album. A few months after “Ballad for a Modern Man” was completed, Dillon set to work on a track called “Forward Progress”, which came to him in a more alternative way. “A lot of it arrived almost fully formed. It’s as though you’re receiving a transmission and you just write it down. It’s rare, but it happens sometimes with creative stuff.” Dillon likens these transmissions to “incoming facts from the cosmos”.

For Automatic Tasty’s track “A Happy Town”, a music video was also created. “Garry MacLennan who does the artwork for Wrong Island, and his missus who did art direction, put that video together”, Dillon says. Inspiration for the video’s content was taken from the altered societal landscape caused by the pandemic. “We were in lockdown at the time, so it was extremely limited what could be done, not to mention having zero budget”, he explains. However, these restrictions led to a piece with surreal visual cues that fit the track’s ethereal positivity. “We were talking about emotions in the track and what objects they reminded us of”, Dillon says. “He did a shoot on these very colourful backgrounds, with wobbling bowls of noodles and spilling cups of coffee. It’s a deadly little video.”

Dillon points out that creating this album didn’t disrupt him from working on other music. He describes it instead as “almost like a parallel line running in the background”. With that in mind, you can expect to hear more from Automatic Tasty in the near future.

A Farewell To Reason is available digitally on all major streaming platforms, and vinyl is available for purchase online.