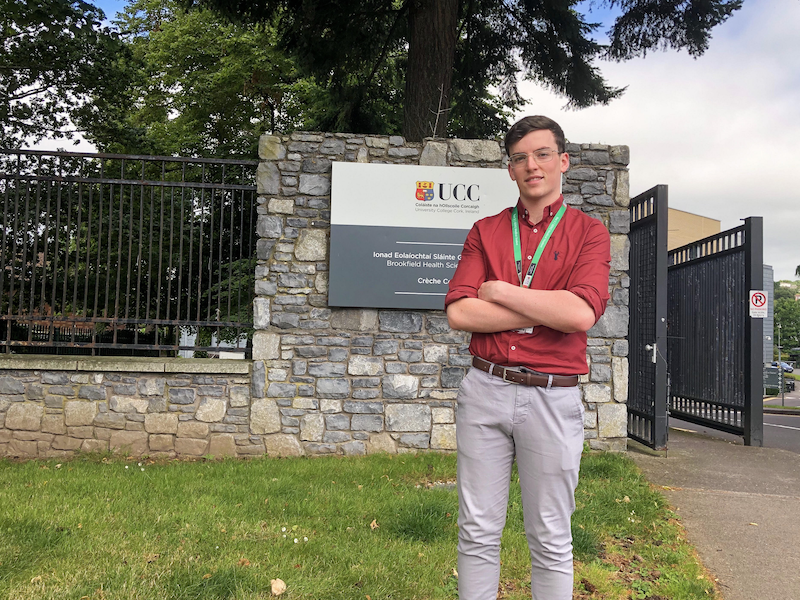 There’s a new kind of intervarsity competition arriving in Ireland this autumn: the Vampire Cup. Winning this league, however, will require civic engagement rather than athletic skill. Using a novel approach to campaign for blood donations, the leaders of the Vampire Cup initiative hope that an engaging social media presence and some friendly competition will dramatically increase blood donations from university students.

Only 3 per cent of the eligible Irish population donates blood. Of those 80,000 donors, 18 to 24-year-olds make up a mere 2 per cent according to the Irish Blood Transfusion Service (IBTS). Knowing this, Glenn Curtin, a fourth-year medical student and regular blood donor in University College Cork, was inspired to take action – and decided to launch Vampire Cup Ireland after learning about the concept through an Association of Medical Students Ireland conference.

“We’re trying to get more young people involved in blood donation by increasing information availability and participation rates of blood donation”, says Curtin. “We’re doing this by pitting colleges against each other to see who can donate the most blood.” Curtin and a team of medical students from across the country are replicating an initiative founded by Australian medical students in 2008. Curtin was impressed by the success of their program, which saw an increase from 400 donations in 2008 to over 3000 in 2018 according to the Australian Medical Students’ Association.

At the heart of Vampire Cup is the desire to save lives. Sarah Abdelhafeez, one of the Trinity Vampire Cup leaders, says that until she began studying medicine, she was unaware that one in four Irish people will need a blood transfusion in their lifetime, a figure that she describes as “staggering”. Speaking to The University Times, Abdelhafeez explains that the campaign, “can provide that sort of education to all the other students – so it’s not just the healthcare students who know about the problems.”

To achieve its goals, the Vampire Cup will take a two-pronged approach. One side is the competition designed to increase numbers of blood donations, where students at participating colleges can earn points for their schools. According to Curtin, checking your eligibility to donate blood through the Irish Blood Transfusion Service, physically donating blood, encouraging friends and family to check their eligibility and donate and using your college’s Vampire Cup hashtag are all ways to earn points. “Everyone likes a bit of competition, I think”, says Abdelhafeez about the programme’s design.

The second part of the initiative is information and education. Emily Wallace, the Vampire Cup coordinator for the west of Ireland and a medical student at NUI Galway, says she only recently learned just how essential blood donations and transfusions are to healthcare. Wallace points out that donating blood “is a really easy way to save someone’s life”.

With their information and education campaigns, Vampire Cup leaders hope to break down any barriers keeping 18 to 24-year-olds from donating. Abdelhafeez thinks that part of the problem is myths about who is eligible to donate. One such myth is the idea that those with piercings or tattoos cannot donate. This, Abdelhafeez says, is not true – the Irish Blood Transfusion Service allows people to donate four months after being pierced or tattooed. Smoking also does not affect your ability to donate blood.

There are, however, other policies that prevent young people from donating blood. The controversial restriction that men who have sex with men (MSM) have to wait 12 months after last having sex with a man to donate blood deters many university students – who deem the policy unfair – from donating blood. Due to this restriction, and others put in place to keep the blood supply free of blood-borne diseases, only 60 per cent of the Irish population is eligible to donate blood according to the Irish Blood Transfusion Service.

It’s really important that people know that blood donation is so essential to healthcare. Ordinary people stepping up to donate blood are the heroes of healthcare really.

Curtin wants students to know that even if they disagree with some of the Irish Blood Transfusion Service’s policies, boycotting giving blood only hurts the patients that need transfusions. By educating students about why eligibility restrictions are in place and how many people need blood transfusions every day, Vampire Cup leaders hope to motivate students to help in any way they can. “It touches a lot more people than we think”, says Curtin. “It’s really important that people know that blood donation is so essential to healthcare. Ordinary people stepping up to donate blood are the heroes of healthcare really.”

For those that want to step up and donate but never have, it can be intimidating – especially if a friend has shared a story about fainting during donation or if you’re afraid of needles. According to the Irish Blood Transfusion Service, drinking lots of cold, non-alcoholic fluids and having a large meal before your donation will greatly reduce your chances of fainting or feeling dizzy during donation.

As far as needles go, Abdelhafeez advises students to think of the bigger picture. “There’s you, who is scared of needles, and obviously that is completely valid and is very frightening for you in the moment”, she says, “but if you feel that, you know, there is a cancer patient who needs this to survive, it hopefully will make you more likely to just go donate and make you feel a bit better”.

The format of Vampire Cup will differ from what was originally planned due to many Irish universities limiting on-campus activities because of the coronavirus – but the main goals remain unchanged. Information campaigns about blood donation will be launched at the start of college, and students will be encouraged to donate at off-campus blood donation clinics. In the future, Abdelhafeez hopes to have on-campus blood donation clinics at Trinity to make it as easy as possible for students and staff to participate.

So far, 13 Irish colleges and universities have joined the Vampire Cup initiative, encompassing some 198,000 students and staff according to Curtin. With the Irish Blood Transfusion Service reporting that hospitals are returning to a pre-coronavirus level of demand for blood products, Vampire Cup is launching into a time of increased need for blood donations, so Wallace says that the Irish Blood Transfusion Service is very enthusiastic about getting more university students involved.

Vampire Cup organizers hope that the effects of their programme will extend beyond the annual competitions run between colleges and will help college students develop a lifelong habit of donating. Additionally, earning points in the competition is open to all staff of the university, further increasing the reach of the programme and the number of people who can participate.

Whether you’ve never donated blood before or have donated many times, you can get involved in Vampire Cup. All information about how to get involved will be communicated via their soon-to-launch website and social media channels.

For those who have never donated before, Curtin says: “Take the plunge. Do it once, and if you don’t get the rush that I do every time I donate blood then you don’t have to do it again. But you do get an intense sense of altruism and you feel like you’re doing good when you donate blood.”
A sentiment echoed by Curtin, Abdelhafeez and Wallace is that Vampire Cup is not just for medical students. “Healthcare is about community”, says Curtin, “and we want young people to become part of that community”.