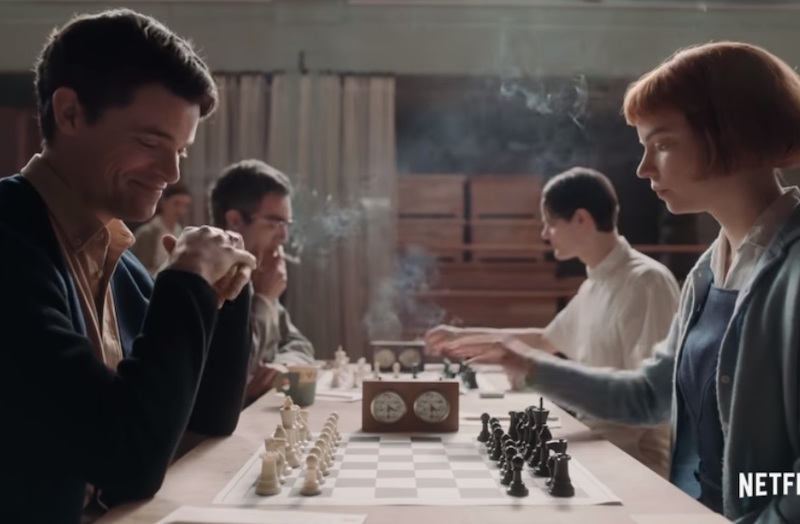 DU Chess Club says its riding on the waves of success of Netflix's show The Queen's Gambit.

It’s fair to say that the coronavirus has slaughtered sport on campus and the impact is pretty universal. No training, no matches. For clubs, it’s been a serious struggle to keep running and to get new members in. DU Chess Club, however, seems to be doing just fine.

Chess has been pushed into the mainstream of late with the popularity of Netflix’s new show The Queen’s Gambit and lockdown has meant that online chess is booming like never before. Amid all of this, a newly reformed DU Chess Club hopes to take advantage of the hype.

“ChessSoc lost its funding due to mismanagement”, Vice President of the club Conor Maher tells me. “I think the president or the treasurer went on Erasmus two years ago and then there just wasn’t anyone to take over.”

“Last year, Luke Scott tried to get people involved – I think it was around, but it was pretty bad.”

When starting the club back up, the committee looked to the work of Alice O’Gorman in RCSI for guidance as to how they could grow themselves. Maher has looked to the Royal College of Surgeons in Ireland (RCSI) for inspiration where Alice O’Gorman, Secretary of the European Chess Union Women’s Commission, leads its chess club. “We are trying to model our chess club off of the amazing success of their club and that’s all Alice’s doing. She’s on a European council for women in chess, she’s pretty incredible.”

DU Chess Club’s current committee is made up of Conor O’Donnell, the president, Conor Maher and Conor Nolan, who share the role of vice president, and Rossa Brennan the secretary, while the position of treasurer remains vacant.

Unlike the three Conors – who have all represented Ireland in chess at various different levels – Brennan is a complete beginner to the sport and is really aiming to bring in more beginners to the club.

“He is really pushing the society to get active with beginners which is great”, Maher says of Brennan. “We’ve seen a newfound love for chess this year with online chess becoming so popular during lockdown and The Queen’s Gambit.”

Maher admits that this current wave of chess popularity is really helping with these signups and pushing the club further: “A lot of our work is being done for us by pop culture. We are surfing on this major wave of chess, it’s cool. Chess isn’t seen as that nerdy, glasses thing anymore, it’s quite cool.”

A lot of our work is being done for us by pop culture. We are surfing on this major wave of chess, it’s cool. Chess isn’t seen as that nerdy, glasses thing anymore, it’s quite cool

As membership steadily increases, Maher is hopeful that more female students will be encouraged to join the club: “At the moment we have almost no female members which is a disgrace. The committee is all male”, Maher tells me frankly. “Ireland really has done a terrible job in terms of bringing up women in chess.”

“We really want to encourage more women to get into chess and hopefully The Queen’s Gambit will also have encouraged that.”

However, it’s not just this increased prevalence of chess in pop culture that encouraged the committee to take over the club – there’s also an incredibly strong crop of players in the college right now, unlike any other team fielded by a college side to this date, Maher reckons.

“This year we have Mustakim Ul-Haque, me, Conor Nolan, Conor O’Donnell, Peter Carroll and then you have Jacob, and a PhD Student Jasmina. They are all over 1900 so this year, especially for chess in Trinity, it’s a crazy strong year. We could field an entire Team of six all rated above 1900 and then even below that we have such depth.”

For those who aren’t acquainted with the chess rating system, a rating of 1900 means that you are around the 200th best player in the country – unprecedented strength for a university side.
Despite the lack of over-the-board tournaments, the team will still get a chance to test its strength against some of the best players in the world when they compete in the 2020 International Championship League – a worldwide online championship.

“This year we are doing the 2020 International Championship League which Dublin University has won its first match 10-2 over Warwick in the first round. We have a strong team”, Maher says. “Our team from the first round massively outranked the team of Harvard.”

“It’s just incredible where we are going this year”, he adds.

“Hopefully later in the league we get a Dublin University vs Ukraine match which would be good fun”, Maher says jokingly. “There’s a €2,000 prize fund for the tournament, so there are pros playing as well. It’s a great experience for us and hopefully we can do well enough.”

One competition which has fallen to the wayside is the Leinster Chess Leagues, where Trinity used to compete in the top division. “The Leinster leagues aren’t running until the Summer. But between in-college championships and things like a ladder, we should be able to subside the demand for tournaments when they’re unavailable”, Maher says. While the committee has plans to substitute the demand for competitive play, but for now it will mostly be with competition between the members.

“The Irish Chess Union are running great online competitions which a good few people have taken part in. Chess really does lend itself to being online”, Maher cheeringly adds.

However, online chess is not without its faults, and cheating has become commonplace not just in casual games but even recently in an ICU ran tournament, something that Maher is acutely aware of and trying to tackle, even if it’s not easy to actually convict someone of cheating.

The Irish Chess Union are running great online competitions which a good few people have taken part in. Chess really does lend itself to being online

“We are going to bring in cheating rules to our constitution because of the rise in cheating with online chess. Danny Rensch, one of the founders of ‘chess.com’, is willing to go to court over being sued for people having their accounts deactivated just because it’s such a massive problem in online chess.”

“Even over-the-board cheating happens fairly regularly and people get away with it, so we want to make sure the Trinity chess club grows in a good way. If you look at people who cheat, they aren’t very good chess players and don’t play chess for the right reasons.”

With the club riding the waves of chess in popular culture at the moment, one might worry that they could see a decline in participation once it leaves the mainstream. But Maher says the club is already planning for that and has ideas to get people involved. “This is very much an idea in its initial phases”, Maher warns me, “but towards the end of the year and even into next year if at all possible, the idea of having a charity chess boxing event”.

With most of Trinity’s sport grounded to a halt, DU Chess Club is getting creative during this pandemic and is thriving through it as a result. If you’re a fan of The Queen’s Gambit and looking for an outlet to scratch that competitive urge, then taking up chess might just be the thing to do.