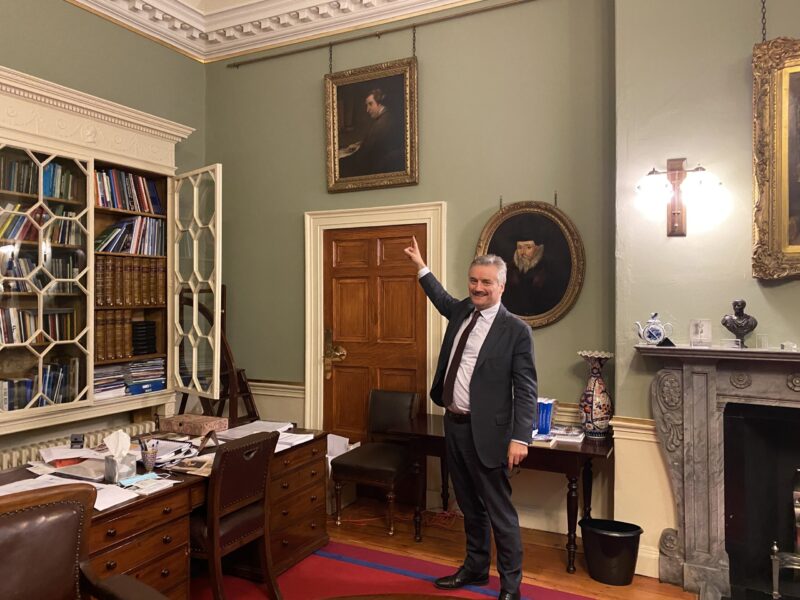 Provost Patrick Prendergast points to a portrait of Edmund Burke hanging on the wall of his library.
Cormac Watson for The University Times

Provost Patrick Prendergast by nature likes innovation – the idea that problems should be solved with solutions rather than with a tweet. This makes sense considering he is an engineer by trade – a job he says is all about “the idea of taking action”. It also therefore makes sense that Tangent – a programme in Trinity fostering entrepreneurship – has named its upcoming innovation competition the “Provost’s Innovation Challenge”.

Problems are solved when people take action, the Provost tells me, no matter how small or big that action may seem. As we chat in his library – adorned with paintings, old-looking books and a big flat screen tv for Zoom meetings – he points at a small portrait on the wall, nestled in a corner of the room.

“It’s one of the most famous portraits of Edmund Burke, because he’s sitting there, he’s about to write something, you can see that he puts his head sideways to think a little bit before he writes. He’s caught in the act of thought.”

The Provost puts one of Burke’s most iconic quotes to me: “Nobody made a greater mistake than he who did nothing because he could do only a little.”

Most innovation, Prendergast says, is “incremental”: “It does only a little but it’d be a mistake not to do only a little because it is by many little things that we change society for the better.”

And that is what a number of innovation-minded Trinity students intend on doing this weekend as part of the Provost’s Innovation Challenge. The challenge brings together teams of students who work on ideas to help fix social problems – this year they are focusing on making cities sustainable. Making a city sustainable is a massive undertaking with no one solution. Students are encouraged to therefore bring as many solutions with them as possible.

This weekend’s event is called a hackathon. Students come together virtually – some with ideas and others without – pick a problem and then try to come up with a solution. Specialist organisations, as well as Tangent staff, mentor the students and point them in the right direction, making sure that their ideas are workable.

A video on Tangent’s webpage of one of the hackathons in previous years captures that vibrant energy – students sit around in groups chatting excitedly and pointing at diagrams and ideas scrawled onto whiteboards. This year will be different of course – students cannot meet up in person – but Prendergast says that the “principles” of the challenge will remain the same: having a diverse team of students with different interests and backgrounds, pooling their thoughts to come up with an idea.

The LaunchBox programme spans the summer months, and helps young entrepreneurs take their ideas and turn them into something concrete that they can bring to investors. Ten teams are selected – each  gets €10,000 and, under the mentorship of Tangent staff, successful entrepreneurs and industry experts, go off to set up their business.

Similar to the Provost’s Innovation Challenge, at the end of the summer, each team pitches their company – this time to potential investors as well as the LaunchBox team and a heap of staff and students. The top three companies that emerge from the nerve-wracking five-minute pitch win €3,000, and – potentially – the backing of a curious investor.

The winners of the challenge get €3,000 and Tangent puts them on a sprints programme to help get their idea off the ground

Lizzy Hayashida – who came to Trinity from the States in 2017 to do an MBA – says that LaunchBox was “huge” for her and the company that she co-founded, Change Donations, now one of the top 100 startups in the country.

Change Donations came first in the LaunchBox competition, giving Hayashida and the other co-founder, William Conaghan, the cash, investment and space needed to kickstart their business. It also took Hayashida out of her comfort zone, and helped her “learn the ropes”.

“It was really teaching us a lot of customer validation strategies and forcing us to get out of our comfort zone. For me, in particular, I’d actually been working in startups for the last eight years.”

“I’m from San Francisco. I’d been working at startups in Silicon Valley and New York. But it’s very different, I think, to work on a startup than it is to found one which I learned very quickly.”

“And so Tangent LaunchBox, which is run by Tangent, was a great way for me to learn the ropes, on that side of startups, learn how to pitch and talk in front of a crowd, which I hate.”

LaunchBox, Tangent, the Provost’s Innovation Challenge – each of them rely on a chaotic coming together of ideas, giddiness and an attempt to mould that energy into a workable idea.

I’m from San Francisco. I’d been working at startups in Silicon Valley and New York. But it’s very different, I think, to work on a startup than it is to found one which I learned very quickly

The first day of one of Tangent’s new programmes, CEO of Tangent Ken Finnegan looked out his window into a nearby classroom. Tangent students were screaming and laughing. Their coordinator had told them to make paper airplanes with questions on them and throw them about as a way of getting to know each other and to break the ice – the sort of thing most teachers would balk at. This, to Finnegan sums up what Tangent is about.

“It’s unlearning what you’ve learned before. This is the first step into being an entrepreneur: you need to have that creativity, you need to get out of the mindset of that structure and feel free to be creative, be imaginative and then harness those crazy thoughts, those ideas, and then change it into something.”

When I ask the Provost what ideas he would like to see emerge from the hackathon, he says that “if I was able to think what a good entry would be, it wouldn’t be a good challenge”.

Instead of concrete ideas then, I assume what Finnegan and the Provost will be hoping for most this weekend is the kind of excitement only a paper airplane fight can bring.