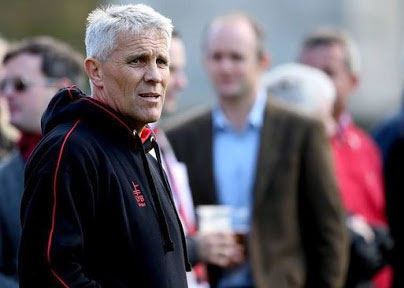 Last season was a strange one for Dublin University Football Club (DUFC). Despite a strong squad that boasted a number of Leinster and International players, the team had been underperforming before the coronavirus cut short an underwhelming season.

DUFC’s Head Coach, Tony Smeeth, admits the season was a disappointing one, but not for the reason you might expect: “I just thought we had too many good players, which is a weird thing to say.”

“Overall it was a bit disappointing. We had too many players playing for Leinster to be honest whereas the year before we could manage without them, we made the top four.”

“Last year expectations were reasonably high going in. In theory we had all those guys still with us but you know in the end when you look now in hindsight and see Rowan Osborne, Dan Sheahan, Thomas Clarkson – guys like that all have contracts now”, Smeeth continues.

“This year hopefully we won’t be as reliant on those guys – we can’t be”, asserts Smeeth.

DUFC’s blistering start to this season showed that Smeeth was certainly achieving that goal. Before the season’s abrupt halt, Smeeth’s squad were rolling – unbeaten in all competitions including a statement win over UCD in the semi-final of the Leinster Senior Cup, and most recently, a gritty comeback win against an experienced Terenure RFC side.

I just thought we had too many good players, which is a weird thing to say

Captain Max Kearney attributes this, in part, to the new cohort of players that have joined the team, and two freshers in particular – Harry Colbert and Harry Sheridan.

“Harry Colbert has been great for us so far. He’s played numerous games for the firsts and we have another new fresher come in as well, Harry Sheridan, and he’s involved with the Ulster Academy, but he’s come down to play with us.”

“It is a big boost especially in positions where we might not have the depth. Some of these clubs we play against have well-experienced lads who have been around many years and fully grown adults playing against university students so it’s great having those first years come in and perform as well. Not just get by but outperform players who are well older than them.”

The physicality of the team’s newcomers is something to marvel at for Kearney: “I find it baffling that every year a new first year comes in and I don’t know what they are doing to them in school but they’re still smashing adults.”

“The two Harry’s have stepped in and it’s almost like they’ve been playing senior rugby for a few years”, Kearney adds with a touch of incredulity.

Smeeth is also full of praise for his first years, but laments the loss of a number of Trinity hopefuls who were training with the squad in preseason but became victims of the Leaving Cert points controversy.

Smeeth assures that they would have gotten their course in Trinity any other year, but says that because the calculated grades system penalised South Dublin private schools, they missed out.

“We had a big group of freshmen training with us through August and six or seven of them turned around and are going to UCD now because there was such carnage from the CAO. We had guys who are 15 over BESS last year and missed it this year which is frightening.”

“I thought we were going to clean-up. We had so many players who were saying they got way over and they ended up missing their course, and not just missing by two or three points but missing by 15 or 20 points.”

“It’s a shocker”, Smeeth continues. “I think we had seven guys who I thought were shoo-ins who would have been over the points that were required last year are now in UCD – but what can you do.”

Yet despite the frustration of feeling that DUFC were robbed of even more talented freshers, Kearney and Smeeth are aligned in their opinions of the new first years they did get, and also harmonious on what the team’s biggest strengths were coming into this season.

“Hunger”, is the word Kearney uses to describe the mindset of this team coming out of lockdown.

“Lockdown gave us a perspective on how important sports is in our lives in general, how it gives us structure and it’s a big part of our cultural society with all of our parents coming in to see us on a Saturday.”

“I think we are all just really keen to get back and play rugby and to win as well. So far the lads have just been really hungry to win and to improve. The attitude has been excellent”, Kearney remarks.

For Smeeth, it’s the team’s dedication to training. This, Smeeth believes, is the only way they can bridge the gap between them, as a university side, and the rest of the sides in the league. DUFC are one of the youngest clubs in the All Ireland League (AIL), therefore a rigorous strength and conditioning program is crucial to be able to hold their own physically.

Lockdown gave us a perspective on how important sports is in our lives in general, how it gives us structure and it’s a big part of our cultural society with all of our parents coming in to see us on a Saturday

“One advantage we have over the clubs we play is that our guys train properly. No one will train as much as we do in this league. We train like Leinster to a degree – not quite but we almost do as many sessions as they do.”

This dedication to training and getting stronger was evident even for the duration of the lockdown the country went through. The team would get together in pods of six, all within regulations both men assure me, and lift weights in order to keep in shape.

“When [last] season ended from COVID all the lads were working remotely and people were doing the training. We did hubs around Dublin – we got weights from the gym and we had homes in people’s gardens”, Smeeth tells me.

“We had like three very rustic looking gyms”, Smeeth jokes. “But it was great for the lads because it was the only thing going on there for a couple of months, just a few guys going to lift weights.”

It was also great from the social aspect, says Kearney, who hosted some of the pods in his own back garden: “It was a nice thing to do because we hadn’t seen each other in a few months and hadn’t caught up with each other. It was also a nice team building thing to do during the summer.”

“Lads are dying for something like that as well after lockdown. I think it has really benefited us just getting a head start doing what we could do out of lockdown. Looking at the results at the moment, I think it definitely helped us.”

One advantage we have over the clubs we play is that our guys train properly. No one will train as much as we do in this league

With the country now under level-five restrictions, the team will no doubt be disappointed to be cut off from playing during a period of great form. Moreover, the side was hit with a spate of coronavirus cases last week, with eight players contracting the virus as well as one staff member.

But if and when the league resumes, it would be foolish for anyone to look past Smeeth and Kearney’s side as genuine contenders in the All-Ireland League.

For now, however, it’s the uncertainty surrounding the future of club rugby that is the most challenging aspect of the situation.

In an email following the cancellation of fixtures, Smeeth expressed that: “Yes it’s disappointing to have the series called off, hopefully it will only be for four weeks, but as you know things are changing daily.”

“We have got off to a really good start winning our first five games. The challenge will be to keep the players motivated and sharp during the enforced break. The main issue is the indefinite nature of everything, you simply cannot plan with any certainty.”

But as Kearney put it, DUFC were hungry coming out of the first lockdown and that hunger showed through their first five matches. Coming out of the second, we should expect them to be starving.