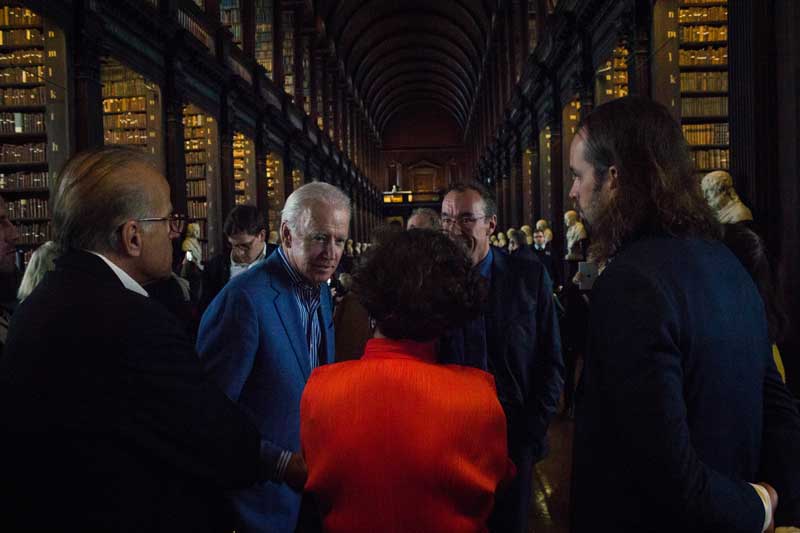 Ivan Rakhmanin for The University Times.

Since Joe Biden’s election to what is arguably the most powerful position in the world – President of the United States of America – an inordinate amount of emphasis has been placed on his Irish roots. National and international media have convened in Ballina, Co Mayo in recent weeks, to capture the somewhat bizarre loyalty that Ballina locals still have towards Biden today. Even Biden himself has gone to great lengths to stress his links to Ireland, quoting Séamus Heaney ad nauseum and responding to a request for a comment to the BBC with: “The BBC? I’m Irish!”

In keeping with his desire to maintain strong connections to his Irish heritage, Biden has made two visits to Trinity – first, in 2016, in his capacity as Vice-President of the United States, and again in 2017 during a private visit to Ireland.

Of Biden’s first visit, Helen Shenton, librarian and college archivist, remembers that “there were all these big people carriers with blacked out windows, all black”. Shenton lingers on the “18 or 20” domineering black vehicles that briefly invaded campus. “It was very dramatic”, she says. The caravan of people carriers “snaked around” Front Square, Shenton says, stopping people in their tracks.

“Everyone in Front Square stops and takes a photograph, because it’s a real event”, she says.

The lead-up to Biden’s first visit in 2016 was uncertain, at some points seeming like it may not happen at all due to graduations that were occurring on the same day. When the visit was confirmed, it meant a whole new level of security requirements had to be arranged.

“People sometimes wouldn’t feel right accepting the award, say, at the start of their career, so I don’t think it would have happened if he came at the start of his vice-presidency in 2008.”

For the University Philosophical Society (the Phil), Biden’s first visit was very much a case of right place and right time. Matthew Nuding, the president of the Phil at the time, says that the society typically finds it difficult to get any politicians to agree to receiving its Gold Medal of Honorary Patronage, which it awarded Biden: “People sometimes wouldn’t feel right accepting the award, say, at the start of their career, so I don’t think it would have happened if he came at the start of his vice-presidency in 2008.”

As well as having to plan where people would stand and where everything in the room would be placed, Nuding explains another issue that the Phil had to work out with Biden’s security detail: “We had to figure out how giving him the medal would work exactly. The Secret Service were concerned about the fact that the medal has to go around your neck, which is a potential security risk.”

Biden was awarded an honorary doctorate – his first such award outside the United States – and the Medal of Honorary Patronage during the same ceremony, occurring just after the UK voted to leave the EU. Chris Morash, then vice-provost, said Biden’s acceptance speech acknowledged this quite profoundly.

“The vote had just happened the previous day, and he said: ‘You know, the real question we have to ask is: why is it now – when so many more people have so many more chances than they’ve ever had before – are there so many people who feel so alienated?’”.

“In years afterwards”, Morash says, “I thought, ‘that was absolutely the question’. That’s the question that this [the 2020 US presidential election] is about, that’s what Brexit was about, and he had the kind of vision to pick out that question from the start”.

The initial security concerns regarding the graduation taking place that day didn’t end up causing any issues. “There were obviously so many people there that thought they were just graduating that day and then all of a sudden, they’re getting a degree alongside Joe Biden”, Nuding explains.

Outside of the official events, Nuding said that Biden was “probably the most charismatic person I have ever met”. “I feel like everyone that spoke to him kind of came away with a smile.” During this first visit, he even hinted at presidential ambitions – albeit jokingly.

“I remember him saying to [another committee member]: ‘Oh, if I had your hair I’d be president’”, Nuding says.

“There were obviously so many people there that thought they were just graduating that day and then all of a sudden, they’re getting a degree alongside Joe Biden.”

Biden’s second visit in 2017, however, “was completely different” to his first, according to Shenton. “He just walked down from Dublin Castle”, she explains. Minus the motorcade and a battalion of state officials, Biden’s entrance was understandably less dramatic. Yet, he didn’t fail to stun people as he had the year previous – if anything, the informality of it left onlookers even more captivated.

Morash recalls that Biden “unexpectedly showed up on the campus”, and since the Provost was away that day, he was asked to accompany College’s surprise visitor.

“I was on my way into work and I got a call saying, ‘can you show Joe Biden around the campus?’”, the then-Vice Provost says. “I thought this was going to be, like, half an hour.”

After 45 minutes, the two had only made it as far as the Exam Hall – the US President-elect made a beeline for anyone who wanted to chat, and as is typically the case with Front Square, there were many American tourists around. Among them was a couple from Delaware who were thrilled to get to meet their former Senate representative face-to-face.

Usually, Morash explains, important visitors to College enjoy a private tour of the Book of Kells and the Old Library. But by the time the pair finally made it to the exhibition, Biden had no interest in having the tourist attraction emptied out on his behalf.

“He goes into the gift shop and it’s full of tourists. He’s talking away to them… he decides to buy a Trinity rugby jersey for his nephew and this pink Trinity sweatshirt for I think one of his nieces.”

Morash wanted to introduce Biden to a Trinity student, but given that undergraduates had not yet returned to lectures, the only person within reach was his own son, who was a student in College at the time.

“When we were on our way out”, Morash recalls, “he leaned over to my son and said ‘I’m gonna tell you a secret about fathers – they’re a lot of work to raise!’”

”I feel like everyone that spoke to him kind of came away with a smile.”

Anne-Marie Diffley – an administrative officer for the Visitor Services who would usually “be in the background” – similarly recalls Biden’s charisma as he “insisted that [she] be in the photograph” alongside the Provost and Shenton in 2016. “I always thought that was very nice”, she says – the picture now hangs in her office.

But this wasn’t the only photograph that Diffley managed to secure with Biden. On his unexpected visit in 2017, Diffley approached Biden in the Book of Kells gift shop. “He was buying bits and pieces in the shop and chatting away”, she recalls. “I normally wouldn’t but I said, ‘can I have a photograph?’.”

“He was so easy and warm, and you see he has that warmth about him that you knew you could ask”, she explains. “But it’s something that I would never do. Although, my colleagues say that if George Clooney did then you would – and yeah, well maybe.” Clooney and Biden only, it would seem.

Of course, for the likes of Morash, Shenton and Diffley, Biden’s visit was just one of many others. For Shenton, the Old Library and the Long Room are not only “at the heart of Trinity, but actually in some ways the front room of the nation”. The archivist points out that “everyone from Queen Elizabeth, the Obamas – Michelle and the girls came – have visited, and it is where basically every head of state, head of government comes”.

Diffley fondly recalls some of the most iconic visits she has played a role in, listing off an impressive resumé of stately encounters. She describes the visit of the Queen and Prince Philip in 2011 as “the most historic visit”, but guffaws as she recalls meeting David Attenborough: “One of my heroes!” The list does not end there, however – Diffley’s first visitors on the job were the King and Queen of Sweden, and she has also given a tour to the Emperor and Empress of Japan. “So I actually have had quite a lot of visits”, she says.

“But you know, I would say in that kind of warmth and charisma, Biden would certainly rank as up there with some of the big visits.”