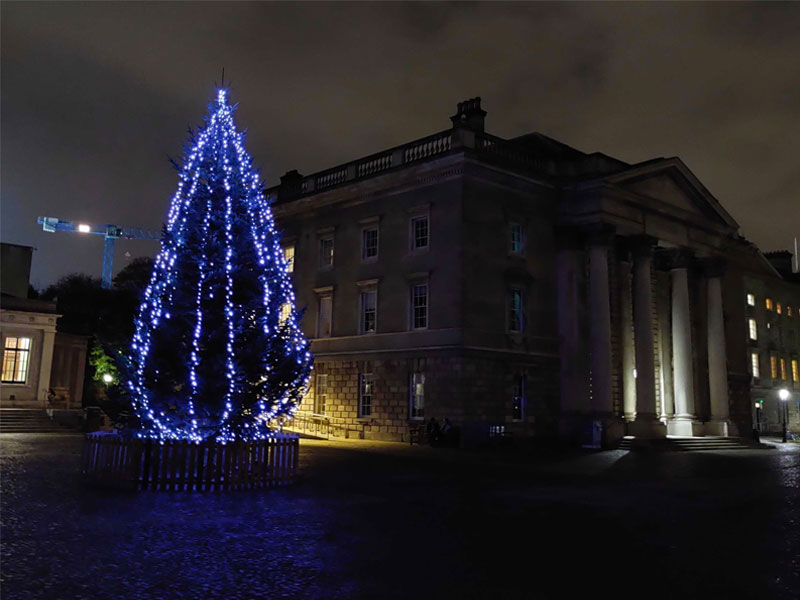 As someone with a tendency to overstretch themselves during term time, Christmas, for me, has always signalled an annual slowing down. During the ever-shortening November days of meal planning, intended early mornings, and inevitably later nights, I take solace in the knowledge that the annual festival of the couch potato is fast approaching. However, the promise of Christmas carried none of its usual comforts this year. In fact, the very thought of it, at times, kept sleep at bay.

I moved to Dublin in September on the promise of numerous in-person hours, having spent my lockdown with a vulnerable person – it just so happens that my best friend is 85, afraid of nothing (the virus included), my next door neighbour and grandmother. On our daily walks from March to September, we travelled lockdown together, mourning our respective loss of independence, social outlets and in rural Longford, our ability to just “pop to the shop”.

When it came time, our last hug wasn’t punctuated with the usual promise of Friday night game shows or Saturday evening crosswords, following my weekend job. Instead, we decided that hell or high water, I would be home for Christmas.

This lingering statement of certainty kept the crackled phone conversations, thanks to a combination of bad weather and poorly-inserted hearing-aids, light and breezy for quite some time. (If you can picture me walking through a residential area hollering into my phone about a “new housemate”, only to get a response about the dodgy “electric gate”, you’ll appreciate the significance of this).

I moved to Dublin in September on the promise of numerous in-person hours, having spent my lockdown with a vulnerable person – it just so happens that my best friend is 85, afraid of nothing (the virus included), my next door neighbour and grandmother

However, that was until Christmas came knocking, before the virus had been given its marching orders. Suddenly, lots of people, many and most of whom in trickier situations than myself, were left listening to the jingling bells of festive anthems, and having to block out their likeness to funeral tolls. While this may sound somewhat dramatic, this feeling, for me at least, was brought on by a few coinciding factors.

When October’s six-week lockdown came to an end on December 1st, it felt like an achievement. Yes, the world was still in a strange state but we could at least begin to look forward again, with loosened reigns. As shops and restaurants reopened again, this glimmer of hope morphed into fairy lights and twinkling tinsel – the commercial signifiers of Christmas had arrived. Nursing a hot chocolate with all the trimmings in a café a few days later, the University of Limerick had just announced free coronavirus testing, irrespective of HSE criteria, for students who were travelling home for Christmas, and things were looking up.

As we have all experienced in different ways during recent months however, this wasn’t meant to last. On December 9th – which might I add, is exactly two weeks from December 23rd – this newspaper announced that despite talk of optional testing earlier in the term, Trinity would not be following in UL’s footsteps. Honestly, it felt like a punch in the gut.

Decisions had to be made quickly. First, there was the €150 to €200 that now had to fall out of the sky at the tightest time of the year. By virtue of the fact that I share a room and live with five other people with lives and jobs and commitments – to contend with the high price of Dublin rent – I couldn’t be confident of my safety from infection simply through “isolating” – or whatever that might mean in this context.

Once that was sorted, I realised that due to my retrospectively foolish and ultimately unfounded faith in the institution priding itself on leading the charge, I was now trying to book a PCR test for the days before Christmas, in December – essentially, a needle in a haystack. Refreshing various websites like socials, I finally got a cancellation, but even then, I couldn’t help recognising the serendipity of this, the time it had taken and how I had managed to get the money together, which could just as easily not have been the case, and perhaps for others wasn’t.

As shops and restaurants reopened again, this glimmer of hope morphed into fairy lights and twinkling tinsel – the commercial signifiers of Christmas had arrived

The self-restricting aspect of my advent season is news to no one by now. Turning down Christmas drinks, eventual reunions and in-person conversations promised during lockdown, is just one variation of a now near-universal experience. What stung was the realisation that unlike other years, feel-good plans and important interactions can no longer be effectively postponed.

Now that we’re set to ring in the New Year under level-five restrictions, I can’t shake the underlying feeling that there’s little consolation to missing out at the moment. It has simply become a game of making choices, whether that’s between your new life and your old life or your lockdown family, your biological family and your closest friends – and at the end of the day, they’re yours and yours only to make.

Stepping back into my grandmother’s kitchen this week, she barely had time for warm welcomes before ushering me towards her one-foot high-potted plant adorned in ribbon and a sorry-looking plastic robin, who has lived at the bottom of a Christmas box since 1962. In years gone by, my dad and I would have put up her tree, signalling the commencement of Christmas by putting every wacky and weathered decoration in its usual place. A green-fingered woman who shows little emotion, this was her version of meeting the world halfway.