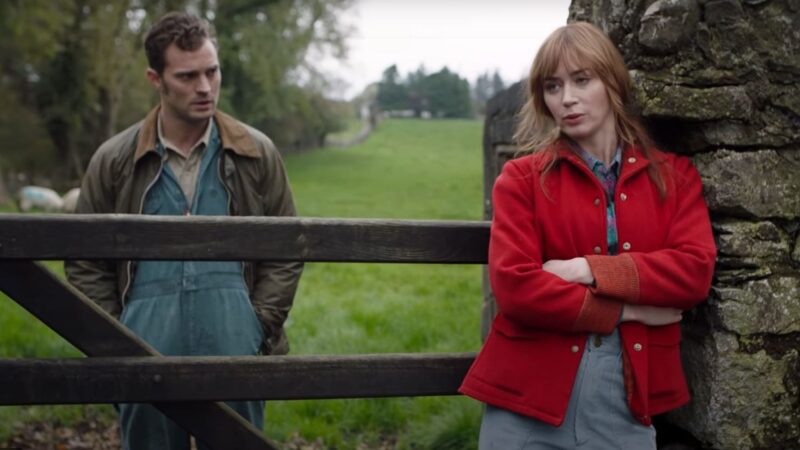 In November, the trailer for a new movie set in Ireland was unleashed upon the world. A romantic comedy written and directed by John Patrick Shanley of Moonstruck fame, starring Emily Blunt, Jamie Dornan, Christopher Walken, and a whole rainbow of atrocious Irish accents – that movie was Wild Mountain Thyme. The country was gripped. Irish Twitter exploded. Mainstream media was quick to follow. It even (my mother gasped) made the nine o’clock news.

The dominant reaction was bemusement, with a healthy dose of straightforward amusement. What were these strange noises coming from these famous mouths? (Mayo accents, apparently.) Could that seriously be what Irish people sound like to non-Irish people? Shanley – himself the proud owner of relatives in Mullingar – has since claimed that an international audience wouldn’t be able to understand authentic Irish accents. Make of that what you will.

Was Jamie Dornan okay? Had he recently suffered a hard knock to the head? How much money was he making for this thing exactly? And when or, more accurately, where was this movie set that Emily Blunt was striding across a field wrapped in a shawl one minute and talking about freezing her eggs the next? One thing was evidently clear. The yanks were at it again, continuing the proud Hollywood Oirish tradition that has gifted us such cringeworthy classics as The Quiet Man (1952), Far and Away (1992) and Leap Year (2010).

In the midst of all the laughter, there was a touch of genuine offence from some quarters. Words like “xenophobic” were bandied about online. Some were even so bold as to trot out “racist”. My sister, a fellow culchie in Dublin, noticed a certain correlation between hurt feelings and Dublin origins, based on what she had seen on Twitter and heard from friends. This made a certain degree of sense. The rest of us, after all, have long since had to come to terms with the fact that we’re backwater provincials.

Was Jamie Dornan okay? Had he recently suffered a hard knock to the head? How much money was he making for this thing exactly?

Yes, the trailer for Wild Mountain Thyme makes it painfully apparent that America has been, at best, only semi-responsive to our efforts to reinvent ourselves as an economically developed, socially liberal, increasingly cosmopolitan society. Hollywood is still enamoured with a traditional, semi-mythical vision of Ireland we abandoned as a legitimate aspiration for ourselves quite some time ago.

Yes, we now have adequate running water facilities that make it both easy and advisable to scrub dirt from our faces. Yes, donkeys are now more likely to be found growing old in donkey sanctuaries than helping out lonely bachelor farmers with their romantic problems. But hey, even if we remain stubbornly rural, poor and backward in American eyes, at least we’re romantic in it – unlike other so-called “shithole countries”, as the outgoing US president so helpfully summed it up.

Until then, we’ll just have to go with it and get what good we can from it. So let’s hope that the incoming US president’s misty-eyed devotion to the auld sod stands to us in the Brexit fiasco. Let’s hope that the Fáilte Ireland-approved shots of lush Irish scenery that are sure to richly adorn every minute of Wild Mountain Thyme attract some American tourists with their wonderful American dollars. And let’s hope that we can all gather together in the cinema on some not so faraway evening and have a good laugh as Emily Blunt wipes the muck from her eyes to roar “It was he that kissed me!” at Jamie Dornan. No one does sentiment quite like the Irish!