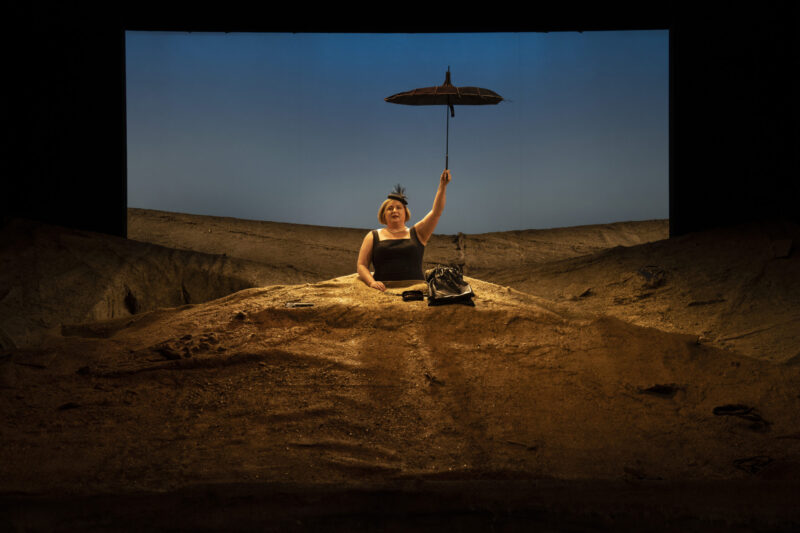 In a much-welcomed return to the world of live theatre, Landmark Productions and the Olympia Theatre have put together a performance of Samuel Beckett’s Happy Days. Streaming live from the Olympia Theatre, the play followed Siobhán McSweeney as Winnie, a woman desperate to keep her head above the ground – quite literally. The show presented a remarkably relevant reminder of the importance of keeping human connections alive, and of working through one’s feelings rather than burying one’s head in the sand.

The show opened on a stark scene. The stage was entirely covered in what appeared to be mountains of sand, presented against the harsh backdrop of a blue sky and the darkness of the wings. McSweeney stood buried up to her chest in sand as a visual metaphor. Her ever-present optimism and sunny smile in this opening act contrasted with the activity of the scene as she attempted to keep her things in order around her, fussing over her belongings and her husband.

The set design, created by Jamie Vartan, reflected the slow passage of time and gradual aging, which is one of the play’s central themes. In the show program, Vartan explains these choices: “We were interested in the feeling of endless tides forming drifts of sand, and what those tides bring in with them, take away, reveal: how sometimes only traces of what was there before are left in the sand when the tide goes out.” Even the smallest details in the set communicated a warning about the dangers of clinging to a sense of normality and positivity without giving oneself the chance to breathe.

Even McSweeney’s costume reflected this. Symbols of an outdated world, such as a parasol and a compact, surrounded her as she wore a fitted black dress, a string of pearls, and a black fascinator. As the play progressed, Winnie forgot where these objects came from or what they once meant to her. By the second act, her appearance had become completely undone, leaving her looking dishevelled and dusty.

Her relationship with her husband Willie, played by Marty Rea, was also revealed to be quite matriarchal. She led him through every aspect of his day and kept up a constant stream of chatter in the hopes of engaging him. Willie, a man of few words, spoke very little during the play, leaving the chatter to his wife. The audience gets the impression that the two of them had not gotten along in recent years as Winnie micromanaged every aspect of Willie’s day while he just wanted to be left alone to read his newspaper in peace.

Despite this, moments of tenderness between the pair revealed how much they meant to each other. Winnie’s desperate cries for human contact in the second act felt particularly heart-wrenching. McSweeney masterfully tugged on the audience’s heartstrings here as she grew increasingly desperate to hear Willie’s voice – something that the audience could relate to, many having lost touch with people due to the pandemic.

Winnie’s thirst for positivity and refusal to acknowledge her negative emotions presented a poignant message surrounding toxic positivity. McSweeney brilliantly performed scenes where Winnie contemplated Willie’s death, among other tragedies, adding a slightly manic edge to her character’s happiness, and making her loneliness even more apparent.

Overall, Landmark Productions and the Olympia Theatre’s return to theatre in 2021 was a hit. The play highlighted the importance of human connection and allowing oneself the space to process negative emotions without guilt. The casting was spot on, with McSweeney displaying a masterful understanding of the work. Every detail from costume to set and lighting design painted a perfect picture of the loneliness of the current situation.