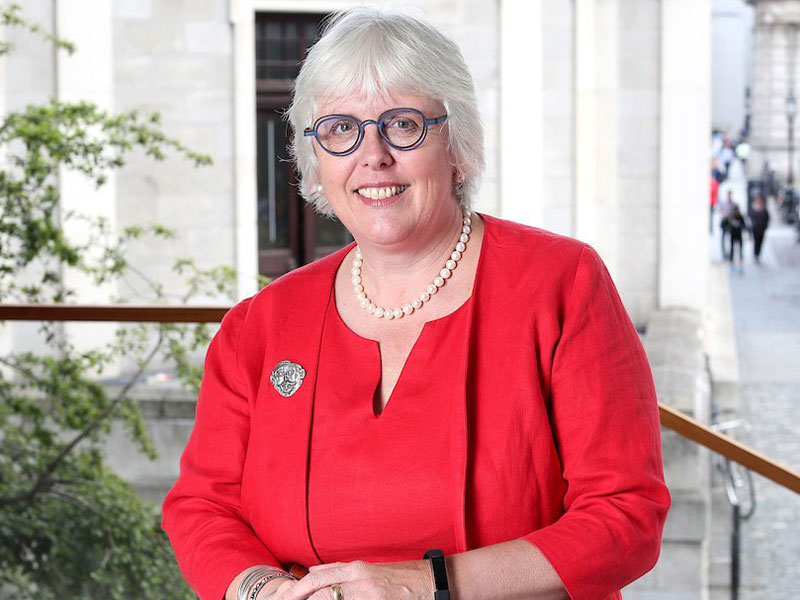 Jane Ohlmeyer will this week begin delivering the James Ford Lectures to Oxford University, a six-week series of history lectures considered the most prestigious in the UK.

Ohlmeyer is just the 11th woman chosen to deliver these lectures since 1896.

For the first time in its history, the lecture series will take place virtually due to the coronavirus pandemic and will be available to a global audience.

The Ford Lectures are delivered annually by a leading historian in their field invited to the University of Oxford to tackle some of the biggest historical challenges. Ohlmeyer is the first historian based in a university in Ireland to deliver the lectures since F.S.L. Lyons was invited in 1977, when he was Provost of Trinity.

Over the course of the six weeks, Ohlmeyer will focus on empire and imperialism from Ireland’s perspective exploring how the Irish were both the victims and agents of empire.

Ohlmeyer will lecture on Ireland’s role in imperialism in America and in India, Irish indentured servitude in the 17th-century Caribbean, the Irish as soldiers, clergymen, and traders and how empire shaped Irish lives.

Ohlmeyer has evoked some controversy for arguing that although victims of imperialism, the Irish are also responsible for playing a role in it.

An op-ed by Ohlmeyer, published in the Irish Times last month, titled “Ireland has yet to come to terms with its imperial past”, received negative backlash online. Ohlmeyer cited Colonel Reginald Dyer, educated in Middleton, Co Cork, who led the Amritsar Massacre at Jallinawala Bagh in the Punjab in 1919, in which 1,500 Indian men, women and children were butchered.

On being chosen to deliver the Ford Lectures, Ohlmeyer said in a press statement: “I am honoured to be delivering the Ford Lectures with Oxford University in 2021 and to receive the invite from their Faculty of History where so many esteemed historians have gone before me. What excites me most is to be able to take the audience with me on a journey through Ireland and empire, an area which has taken up my life’s work as a historian.”

“For many like me who grew up in Northern Ireland during the Troubles, Irish history had a very tangible impact on our lives but Ireland’s imperial past has too often been forgotten or deliberately ignored. In an era of Brexit, ‘Black Lives Matter’ and ‘Rhodes must fall’, it is more important than ever that we understand its complicated legacy and how it has shaped our present.”

Prof Steven Gunn of Merton College, Oxford and chair of the board of electors to Ford’s Lectureship, also said in a press statement: “The present moment of dramatic change in Britain’s relationships with Ireland, Europe and the World is particularly apt for consideration of Professor Ohlmeyer’s theme. We are grateful for all her efforts to make the lectures available amid drastic and rapidly-changing constraints and we await them with pleasure and excitement.”

Ohlmeyer is one of four candidates who have so far made public their intention to run for Provost. Ohlmeyer, along with Linda Doyle and Linda Hogan, have confirmed that they have made it through the interview process. Campaigning will commence in early February.