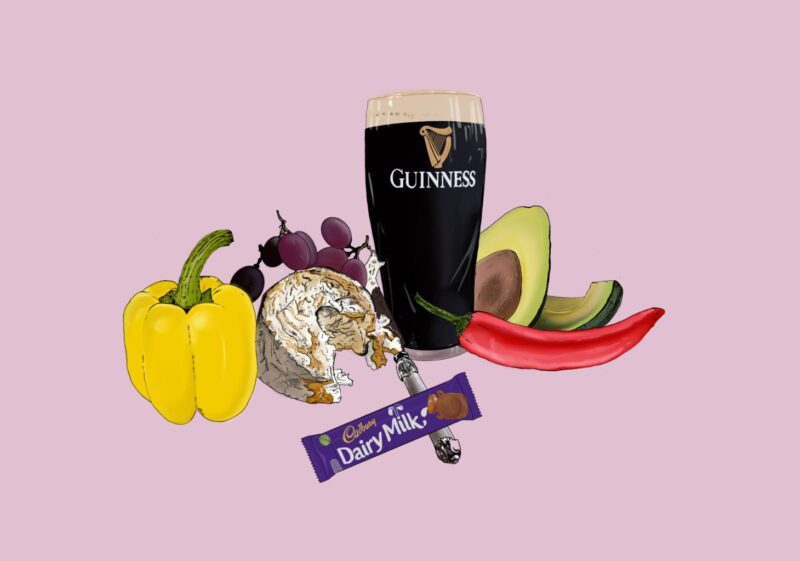 Lucy Sherry for The University Times

Many of my childhood memories revolve around a strong love for food. Fingers sticky after a triple-layer chocolate birthday cake, all ganache and sponge and squidginess. Fried baby squid doused in lemon, served up on chipped plates and red-checkered tablecloths. Slathering jam and cream on still-warm scones at my nana’s kitchen table, shoving my siblings aside to ensure I got the biggest one.

What marks most of these memories, however, is not the taste of the food, but the manner of its consumption. Almost all of these experiences occurred at big tables, where food was shared out and appreciated by all present (save for my siblings on those scones). Fundamentally, it brought people together.

The latest restrictions come with shackles to the kitchen table and a keen desire to hurl any and all banana bread recipes out the window. With the arrival of a new year, we want not to curl by the fire but to gather over tiny tables in cramped pubs, surrounded by pints and crumpled crisp packets. However, this reality is still a long way away. The question now is: what can we expect from dining in Dublin? Or indeed, our future food-based interactions in general?

The past few months have created huge uncertainties for many businesses, with the unplannable nature of the virus leaving restaurant and pub owners constantly in the lurch. Attempts to find a balance of security and normalcy were at the forefront of culinary’s minds, according to Caryna Camerino of Camerino Bakery.

“We wanted to maintain a sense of interaction”, Camerino explains in conversation with The University Times. “We didn’t want it to be tense, with people looking each other up and down as they came into the shop – but it also had to be a safe environment.”

Having decided to close her cafe on Merrion Square in March and focus instead on takeaways and online cake orders, Camerino, like many others, had to completely change her mindset with regards to sales and customers.

While moving things online proved crucial, another angle Camerino adopted was what she dubbs “the grocery pivot”. Undertaken by many others also within the food industry, this practice saw restaurants continue to buy from their suppliers and sell products on to their own customers, making a switch from restaurant to part-time artisanal food store.

As a whole, artisanal foods saw a huge surge in popularity over these past few months, perhaps due to an increased consciousness about the quality of food being consumed at one’s own table, William Despard of Bretzel Bakery posits. While his wholesales saw a reduction of 60 to 70 per cent, the sales in Despard’s bakery increased massively during the first months of lockdown, I’m told, with people lining up day after day to buy morning loaves of fresh sourdough.

“I think lockdown provided quite an education for people at home with regards to food”, he continues. Though Bretzel Bakery began giving out free sourdough starters to budding bakers when bread mania took hold in April and May, this only made people realize how tricky the bread-making process actually was, Despard affirms, adding that they were more willing to spend the €2 extra on fresh bread thereafter.

Despard’s point on good quality food at home – while less true for the average student diet of pasta pesto and €4 wine – is proved when people, now accustomed to home cooking, feel less inclined to rush into eating out as soon as everything re-opens. This point was echoed by Brian Dunlop, retail manager of Sheridans Cheesemongers Rathmines, who says that “the long-term habits we’ve developed won’t just disappear when restrictions ease”.

While the current restrictions lend themselves to a food experience based on quality, they do not allow for long tables of shared platters amongst friends. Food has become a more personal affair as the human contact associated with buying or being served food has been put at risk and replaced by contact-free deliveries and QR-coded menus.

Each person I speak to stress the effort they are making to maintain that human aspect of food. Engagement with a customer and the story behind a food product or dish creates an additional layer to a meal, it seems, as vital as salt on cucumber or garlic in hummus. “Otherwise we’re just shelf stackers”, Dunlop adds, noting that it’s this storytelling at a cheese counter that has always made his work so rewarding.

While customers of a shop or bakery will never have the same sharing experience as diners at a table, Despard noticed that the shared aspect of food can be evoked in more subtle ways. “It was the relationships that people formed in queues!”, he says. During lockdown, bakeries and markets became homing beacons that people could gravitate towards, the same way legless students would somehow always stumble into a fluorescent-bulb chipper, even after losing their phone, wallet and friends.

Most agree that with regards to the Dublin food scene, the city’s restaurants will inevitably see a shrinkage. This isn’t necessarily a bad thing according to Jeremy Cuevas, owner of La Cocina Cuevas food truck, which operates both in Eatyard and through a drive-through system in Naul. Having previously cheffed in London, he has noticed that the restaurant industry, in recent years, has become more concerned with the fanfare and celebrity status of cheffing than the quality of the food. Dunlop echoes these sentiments, noting that lately, “the restaurant industry tended to be geared towards a good location and idea, while not necessarily following through on culinary quality”.

It is Cuevas’ belief that the nature of lockdown will mean that only those passionate will pull through. “A pandemic gives no preference to the next big thing, survival is determined by hard-work, commitment, a love for what you do and an ability to adapt”, he asserts. As he and his partner Laura detail the doubling of sales they’d seen with their food truck in recent months, it’s evident that they embody these qualities equally in their work.

However, the pair did grapple with the risk of investing in hygiene equipment and safety gear, only to possibly face a sudden closure due to changing restrictions. They took this risk, Cuevas explains, because while not acting may have saved them money “not making a move can still cause you to lose everything”.

In the absence of stability, the shared nature of food has mutated and shown itself in new ways. It’s in the act of asking a queuing stranger what bread they like to buy on a Sunday. It’s in the two-minute chat that Jeremy and Laura have with their regular customers, as they pass bags filled with pork tamales and birria tacos over the counter of their van. It can also be found in individual kitchens, linked through Zoom, as people engage in Caryna’s cake-baking sessions, aprons thrown over jeans and pyjamas in equal measure. While longing for those full tables once again, appetites can be sated with increased appreciation for the quality of our food and the new ways we’ve come to show that appreciation.