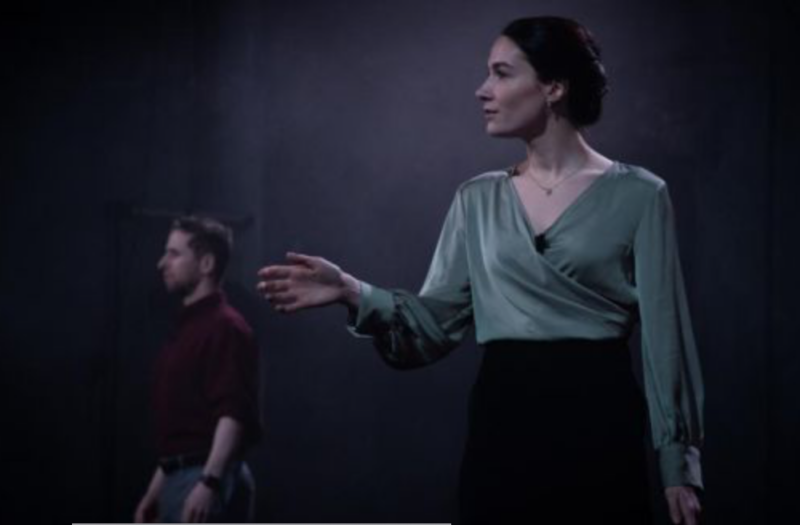 Live-streamed from the Mick Lally Theatre in Galway, Sonya Kelly’s new play, Once Upon A Bridge, was heartbreakingly honest. It transported its audience, as the programme put it, to “one fleeting second” when “three strangers’ lives collided”. The play successfully evoked a sense of reflection, challenging the fast, unrelenting pace of working life and by extension, the pitfalls of the individualistic society we live in.

Sara Joyce’s direction proved integral to creating a sense of place, as the audience were presented with the unmistakable “weary battalion” of London commuters. Joyce also examined the repercussions of individualism through her direction, in anticipation of the repercussions that came at the end of the play.

Opening the play with actors Siobhàn Cullen, Aaron Monaghan, and Adetomiwa Edun jovially detailing their characters’ daily commute, Joyce forged characterisations that conveyed each person’s complexities. By drawing out the three individuals involved in the true story of “what happened on the bridge” in this way, she presented us with the human faces behind the unforgiving “brute” and “beast” of the city.

As audience members became linked with these individuals, we became deeply invested in the story, making the sudden moment of connection between the three characters all the more harrowing. As each character strove towards their individual purpose, crossing paths in the process, the audience were encouraged to scrutinise the merits and failures of a world which moves fast and only pauses for tragedy.

This depiction of a hurried London contrasted beautifully with the suspension of time in the play. The play called for a pause in the hullabaloo of the lives it depicted – and metatheatrically, the theatre also gave us a moment to pause. This idea was paralleled in the medium which, straying from the conventions of recent live-streams, didn’t have an interval. This accentuated the message of Once Upon A Bridge where for one uninterrupted hour, we were given the opportunity to exist within a narrative that was different to our own lives.

The symbolic reckoning of individualism that defined the piece made for a tear-inducing ending, as we witnessed its grim effects. Kelly encouraged us to not let a sense of obligation to the “driving, walking, running” of our busy working lives distract us from “danc[ing] to every song”. Alma Kelliher’s sound design emphasised this, as the rhythm of a constant beat came to represent the constancy of the city, a constancy which eventually faded to a song which the actors danced to at the end of the play.

Once Upon A Bridge is a judgement on the haste and self-sacrifice of an individualistic society – and a love story for the individuals that fall victim to it. If we take one thing away from Kelly’s enchantingly real play this Valentine’s Day, it should be to pause our communal bustle for just a moment, and however briefly, dance.

The show’s run has now concluded. However, the play was written for a live audience and Druid hope to bring it to one when it’s safe to do so.