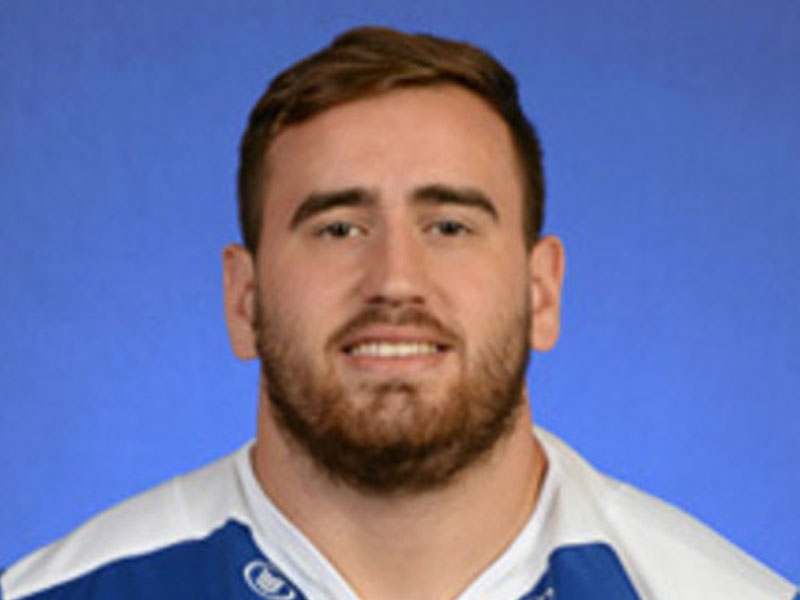 Trying to coach a rugby team online is not a straightforward task, but for Ian Hirst, the straightforward path is not an especially well-trodden one. Now a key part of Dublin University Football Club’s (DUFC) coaching staff as strength and conditioning head coach, Hirst’s route to being one of only two full-time rugby coaches in Trinity was somewhat roundabout.

Hirst’s first acquaintance with Trinity came as a player. He would go on to play five years at DUFC – though he was himself not at Trinity. “I wish I had the brains”, he laughs, which, given his achievements since, is a comment one can safely deem to be laced with modesty.

Hirst then earned himself a place in the starting line up at Clontarf Rugby Club where he duly played for four years whilst simultaneously making several uncontracted appearances for the Leinster Senior A team. The grind eventually paid off when, at the age of 25, Hirst secured a senior contract with Leinster.

“I arrived there after the World Cup [in 2015]”, recalls Hirst, which meant his first season coincided with that of current Head Coach Leo Cullen – a man who has since overseen considerable domestic and European success at the club, racking up four major trophies.

“He was a great guy, a very approachable guy”, says Hirst with evident reverence.

Appreciative of his Leinster mentors he may be, but there is, however, little doubt as to where lies the apex of his gratitude: “Leinster was great of course, but I had a good base. I learnt most of my trade at Trinity – I remember we used to have 30-40 scrum sessions on a Tuesday night with [then Scrum coach] Hugh Maguire.”

“That’s where I developed most of my wisdom”, Hirst adds.

As a player he was under the tutelage of Head Coach Tony Smeeth – a man who remains in the role today and has been with the club for some 20 odd years.

“The club has just been the best to me – it’s more than a job for me, I’ll do anything I can to help them succeed”, he adds.

Such wholehearted gratitude may, falsely, give the impression that Hirst was gifted the job on account of his playing connections. But considering the three years he dedicated to focus on his master’s degree in strength and conditioning at St Mary’s University in Twickenham, any such assumptions would be wholly erroneous.

“I packed the rugby in after a series of injuries and went to study instead”, Hirst says, underlining the unfortunate reality for so many rugby professionals of a much too early retirement.

The club has just been the best to me – it’s more than a job for me, I’ll do anything I can to help them succeed

Hirst completed the degree in June 2019 – a degree that’s success highlights the inaccuracy of his earlier self-depreciatory allusion to a modest brain cell count.

Yet whilst as coach, his relationship with Smeeth has blatantly blossomed (“he respects all my opinions, he trusts what I do – I couldn’t ask for a better boss”, Hirst continues to extol), his conversion from locker room to desk was at first more abrupt than he anticipated.

“It was very hard at first to pull myself away from [instinctively] socialising with the lads after being a player so recently, but you have to have a good balance”, Hirst says. “I pride myself on having a good relationship with these lads, because with S&C you come into so much contact with them.”

“I think at the moment I’m looking after well over 100-something athletes which is full on”, he acknowledges, though with pride rather than any hint of fatigue or strain, despite the magnitude of the job.

Indeed, it seems as though the only scent of struggle lies in the appellation arena.

It was very hard at first to pull myself away from [instinctively] socialising with the lads after being a player so recently, but you have to have a good balance

“At the beginning, it is a bit of a challenge with the new guys and the names – you know, there’s a lot of: ‘You alright boss’ and ‘How’s it going big man’”, chuckles Hirst, displaying the sort of propensity for affability which imaginably made his departure from being a player such a wrenching one.

However, any potential for nostalgia has been smothered by the immersive nature of his job: “We have three different types of programmes out depending on what facilities you can access, so most of them at the moment work with body weight. The players have five sessions a week, with a Zoom call during the week too, but the lads are zoomed out at the minute so we’re not doing too many of them now.”

On top of that is the fitness challenge the club is doing with fellow rugby clubs Lansdowne, Mace, and Terenure. “This week is a 2.4km run. We break it down, so on Monday we had the front row doing it, today, second rows, and so on”, explains Hirst.

When suggested to him, a loose head prop in his playing days, that perhaps the times of this first batch of runners may not be the hastiest, he does concede something along the lines of pace not being their primary attribute. However, he’s also quick to defend them.

For Hirst as well as the entire DUFC squad, the pandemic has been a frustrating time with no games on the horizon, especially given the strength of the current teams. “It’s hard to develop the 20s [Under 20s players] when there are no games”, Hirst admits.

At the beginning, it is a bit of a challenge with the new guys and the names – you know, there’s a lot of: ‘You alright boss’ and ‘How’s it going big man

“A lot of them will lose out on their development as a result, which is disappointing because we’ve got a great squad this year. It’d be a real shame if we don’t get to finish the season off.”

Motivating the players to train is, and will surely be, no mean feat this year. Although DUFC have played six games already this season, losing none of them, the fact that the most recent of these was in September, combined with the uncertainty shrouding the likelihood of its resumption, means that any carrot dangled in the faces of the players, though an undoubtedly succulent carrot, is surely one not easily seen through the ambiguity surrounding the fixture list.

“It’s about how positive we can be”, says Hirst, although he is realistic about the prospects of a season this year: “If it happens, great, if not, we adjust the training plan and go from there.”

“Tony’s keeping everyone pumped, you know. Fair play to him, he’s always looking at the positive side of things, even when most coaches from other clubs have pretty much written off the season”, Hirst adds.

A lot of them will lose out on their development as a result, which is disappointing because we’ve got a great squad this year. It’d be a real shame if we don’t get to finish the season off

For Hirst and Smeeth, April or May time is when the season looks most likely to resume. Smeeth told The University Times last month that plans are currently ongoing for the eventual resumption of fixtures with hope remaining that a 10-week season could be completed if played into summer.

A long wait, however, is clearly in order. Patience and persistence will be key. But Hirst is used to that – he took his time before breaking into the Leinster squad. His academic career similarly bore a semblance more akin to that of the tortoise than to that of the hare. This season may be an unpredictable one – but Hirst, a totem of the long game, will not be going anywhere.